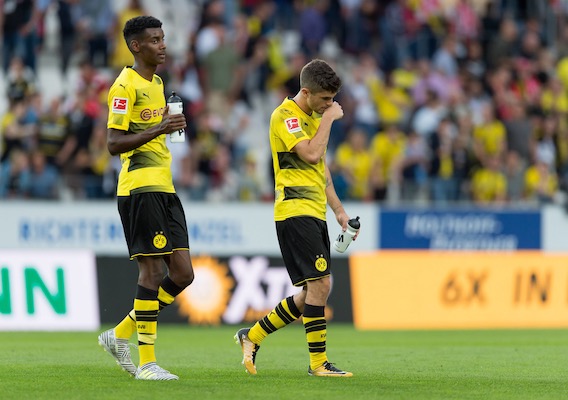 Kenny Saief on Shelf While Pulisic & Chandler on Tour

The newest U.S. international is going to spend some time recuperating while two Bundesliga stalwarts are touring the globe with their clubs. ASN's Brian Sciaretta has the latest scoop on Yanks playing overseas.
BY Brian Sciaretta Posted
July 14, 2017
9:00 PM

EUROPEAN PRESEASONS are in full swing with many top-flights teams touring of Asia, Australia, and the United States, with some Americans taking part. Elsewhere many Americans are settling in a new clubs or are making a push to see first team action.

One bit of disappointing news is that new United States national team winger Kenny Saief, 23, is going to undergo surgery to repair a hernia and will miss seven weeks. The timing could hardly be worse.

Days after completing his FIFA switch to represent the United States internationally, Saief had to be removed from the Gold Cup team and he will miss Gent’s entire preseason. It’s likely will not be fit enough for the September World Cup qualifiers.

Saief’s best chance to rejoin the national team right is now is probably a pair of friendlies in November—should the U.S. qualify in October and avoid a November playoff. But first he needs to get healthy and back on the field.

Chandler and Pulisic on tour

Christian Pulisic and Timothy Chandler are both on the road for preseason barnstorming tours.

Chandler, 27, is back in the United States for Eintracht Frankfurt’s preseason tour against MLS teams. He even notched an assist in a 1-1 draw against Seattle earlier this week. On Friday Eintracht faced San Jose and on Monday it will take on Columbus.

Meanwhile, Borussia Dortmund and Pulisic are off to Asia for a pair of friendlies against the Urawa Reds in Japan and AC Milan in Hong Kong.

The first member of the 2017 U.S. U-20 team to land a contract after the World Cup is goalkeeper Jonathan Klinsmann, who signed with Hertha Berlin this week.

This is his first professional contract after leaving the University of California. The son of the German striker and former U.S. national team coach will now head to the German capital and will play for Hertha’s U-23 team.

"It’s a big club, a Europa League participant, essentially a club that you’d like to play for and whose level you’d like to reach," the younger Klinsmann said "To learn from Rune [Jarstein] and Thomas [Kraft] and to play in the second team to get used to the level of play in the Bundesliga is a fantastic opportunity. It was a chance I had to take with both hands.

"It’s a completely different level to the USA," he added. "I arrived in Berlin a couple of days early to acclimatize. I trained with Ilja [Hofstädt, Hertha youth goalkeeping coach]. He helped me a lot and gave me a lot of tips for training with the senior team. The tempo with the seniors is noticeably higher than what I’m used to, but I think it has been going very well for me."

Klinsmann’s reputation in the United States took a hit in 2014 when he made a tweet mocking Landon Donovan after his father made the controversial decision to cut Donovan from the 2014 World Cup team.

At the U-20 World Cup Klinsmann’s performances improved after a shaky opener against Ecuador and he made some big saves as the U.S. progressed to the quarterfinals.

One U.S. U-20 player who is facing a pivotal season is Fulham midfielder Luca de la Torre, who has done all he can with the club’s reserve team and now needs first-team minutes. Young American players have typically struggled in the Championship so it will be interesting to see if de la Torre can progress at Fulham or if he needs a change of scenery in a different league.

Earlier this week he did have this nice goal for Fulham in a preseason friendly against FC Ziln.

Lynden Gooch is hoping to establish himself as a regular this season for Sunderland, which was related to England’s second tier. On Wednesday against Livingston, Gooch earned the start and had a hand in the first goal in a 3-0 win.

Gooch’s hard shot forced a great save from Neil Alexander and teammate Whabi Khazri was there to tap in the rebound. If Gooch can continue to create like that, he can be a regular for Sunderland this season as  the team looks to claw back to the Premier League.

Aaron Schoenfeld couldn’t make it in MLS, but he is having a nice career in Israel where he has played with three clubs and is now with Maccabi Tel Aviv.

On Thursday the Knoxville, Tenn., native scored in his second straight Europa League qualifier and last week he scored the first goal in a 3-0 win over Tirana. Yesterday with Maccabi Tel Aviv trailing 1-0, he scored the equalizing goal in a 3-1 win over KR Reykjavík.

After being relegated to the 2.Bundesliga, Ingolstadt is looking to make a quick return to Germany’s top flight.

On Wednesday it drew 2-2 with Sparta Prague and American Alfredo Morales scored the opening goal for the Bavarian club. The last time Ingolstadt earned promotion, back in 2015, Morales was one of the team’s top players.