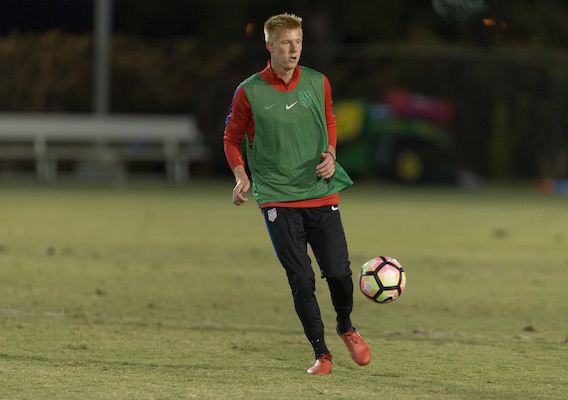 Justen Glad Tells ASN: "It's Going to Be Hard to Beat Us"

The 20-year-old Real Salt Lake player has established himself as a key contributor on Tab Ramo's under-20 men's national team—a squad that is on the verge of qualifying for the 2017 World Cup in South Korea.
BY Brian Sciaretta Posted
March 02, 2017
6:25 PM

AFTER A SURPRISING and well-played victory over Mexico on Monday, the United States U-20 national team is on the verge of securing not only a World Cup berth but also a spot in the CONCACAF U-20 final. The strength of this team has been its defense and Justen Glad has been the anchor of the backline.

Glad celebrated his 20th birthday the day after the Mexico triumph and was in a reflective mood when asked about the team’s gradual improvement over the course of this tournament in Costa Rica. He likes this team’s chances, both in the short term and long.

“We’re doing well right now,” Glad told American Soccer Now from the U.S. team’s camp. “If we come out with the same attitude that we did against Mexico with every team, we’re going to be tough to beat with the players we have and some of the players we don’t have on this roster as well. If you combine that with the hard work and the dedication that you saw versus Mexico, it’s going to be very hard to beat us.”

The scenarios are very simple for the U.S. under-20s. If the team wins or draws against El Salvador on Friday, it will qualify for this summer’s World Cup in South Korea and book a spot in Sunday’s CONCACAF U-20 Championship game against Honduras. A one- or two-goal loss against El Salvador will still see the U.S. team through to the World Cup although it would be out of the final. Only a three-goal loss would eliminate Tab Ramos' men.

Fortunately for the United States, its defense has been stellar and Glad has played a key role. The United States held Mexico without a shot on goal and the defensive triangle of central defenders Glad and Tommy Redding along with Erik Palmer-Brown, who played as a defensive midfielder, completely shut down El Tri.

“Of course there’s always an extra motivation when you’re playing Mexico,” Glad explained, adding it was his first game against Mexico in an official competition. “A lot of people are watching the games and there is a history there that everyone knows about. It makes it exciting and these are the games you want to play and perform well in.”

“Really it was just a team effort,” Glad added. “We pressed them high and didn't let them get comfortable on the ball. Our outside backs did a really good job shutting down their wingers. A lot of their game plan was getting the ball out wide and serving up balls. We didn't really give them the opportunity to do that. But all around the field, anytime they tried to get on the ball and connect passes we were all over them.

"They would make mistakes and then we had momentum in the offensive half.”

With a similar effort from that defensive core, El Salvador should find it difficult against the young Yanks. On Wednesday night El Salvador lost to Mexico 6-1. Despite that lopsided scoreline, the U.S. is expecting a dangerous and desperate opponent—not a demoralized one.

That said, Glad also believes that the solid defensive core will continue to improve.

“Every game we are getting better,” Glad said. “The more you play with someone, the more you understand what is going through their mind and how they see the game. I am pretty happy with how we've been playing. Erik is adapting very well to a new position he hasn’t played much of before. But that is Erik. He’s a leader. He’s going to give you everything and leave it all on the field. But as a defensive minded player, having him sit in front of us is making our lives easier.

"He’s an elite athlete and covers a lot of ground. He runs people off the ground. It’s superb what he’s been doing.”

As well as the U.S. played against Mexico, Glad still feels the sting from a bad loss against Panama to open the qualifying tournament.

“The whole team was super disappointed with that loss,” Glad said. “We showed up and really didn’t put in the work, I guess. That was a wake-up call. I think it actually helped our team. It motivated us to work harder and do more. We learned we can’t go through this tournament and nothing is going to be handed to us each game. We’re going to have to grind it out. That has just helped us build toward our potential.”

It should not be much of a surprise that Glad has been among the team’s best performers in Costa Rica. Most of the players on the team are still yet to have even a full professional season of first team soccer. Instead most are either in college, USL, European youth levels, or were recently drafted into MLS. In 2016, Glad was a regular starter for Real Salt Lake where he played over 2,500 minutes. His performances earned him a new and improved contract with Real Salt Lake that was finalized just last month.

Glad was also part of the first U-20 camp of this cycle in Serbia in 2015 and has seen the team evolve to this point. He hopes to finish off the job in Costa Rica and win its first-ever CONCACAF U-20 championship and then continue to push forward this summer and build upon the quarterfinal finish it had in 2015.

“The team has changed a lot,” Glad said after giving pause for a thought.” The game and style hasn’t really changed. My expectation is that we can go as far as we see ourselves going. With the people we have here, that’s a good thing.

“I think it's only going to get better too. We can only go up from here.”