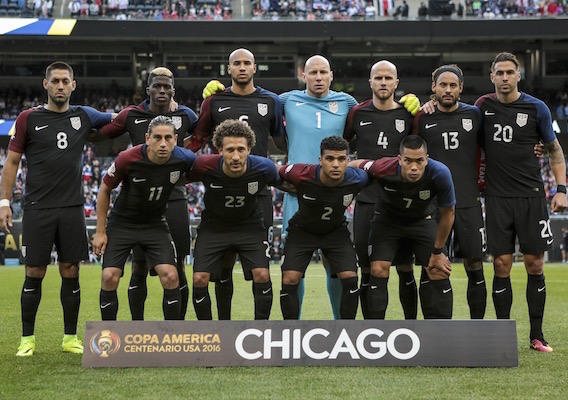 With their backs up against the wall, the U.S. men's national team responded well yet again, cruising to a 4-0 victory over Costa Rica in the second Group A match of Copa America Centenario.
BY John D. Halloran Posted
June 08, 2016
11:00 AM

CHICAGO—Throughout his five-year tenure as coach of the United States men’s national team, fans and pundits alike have attacked head coach Jurgen Klinsmann on a number of fronts, including criticisms of his experimental lineups, contradictory public statements, and inconsistent results.

However, Klinsmann’s teams have also come through more often than not in games that mattered, something that rang true once again on Tuesday night in a 4-0 rout of Costa Rica in the Copa America Centenario.

In the semifinal round of 2014 World Cup qualifying, the U.S. nearly met with disaster after a tie to Guatemala and a loss to Jamaica left the team needing a 90th-minute Eddie Johnson winner against CONCACAF minnow Antigua & Barbuda and a win at home against Guatemala to guarantee advancement to the Hexagonal.

Then, once in the Hex, the U.S. lost to Honduras to open the round in a disastrous performance in San Pedra Sula and needed a win against Costa Rica in the now-famous Snow Bowl and a draw against Mexico at Estadio Azteca four days later to right their path to World Cup qualification.

Just this spring, now attempting to qualifying for the 2018 World Cup, Klinsmann’s side hit another pothole, drawing to Trinidad and Tobago before losing to Guatemala away and needing a result in the return leg against La Furia Azul to right the ship once again.

And while the failure to qualify for the 2017 Confederations Cup stands out as a notable exception to the U.S.’ clutch performances under Klinsmann, the fact is that when his squad finds its back against the wall and needing a result, it tends to get the job done.

Following the opening round loss to Colombia, both the American coach and his players struck a defiant tone with the media. Both asserted that Friday’s loss was closer than the final score indicated and both were clearly irritated with the media’s narrative during Monday’s pre-game press obligations.

Any coach worth his salt knows that an “us vs. them” siege mentality can be very effective and, whether intentional or not, the strategy worked on Tuesday. Klinsmann, for his part, graciously gave all credit for the win to his players.

“Overall, it was a very pleasant performance and it confirms the spirit of the group," Klinsmann said. "The spirit is excellent. They are there for each other, the whole bench is jumping up and down. Everybody wants to have everyone [else] doing well. It’s a good group of guys we have.”

The coach also seemed to think that supporters of the U.S. were too impatient following the opening round loss to Colombia.

“There’s going to be ups and downs," he said. "In certain moments you’re not going to get exactly what you deserve, but you need to be able to keep a strong mentality and understand how to keep yourself going."

“We have a lot of guys who have been in situations like this before,” he later added. “We spoke before the game about knowing on these kinds of nights you need a mentality, commitment, balls, and all these things to carry you through.”

One player who helped the U.S. find success on Tuesday was Jermaine Jones. The American midfielder argued that the team plays better needing a result because it feels pressure not normally there when representing the U.S.

“It’s tough to understand," Jones said. "In most countries, you have a lot of pressure when you step on the field for your national team, so most of the time when we step on the field, we don’t have that pressure. The support from outside the stadium, it’s packed with the other team’s fans, so it’s a little bit tough to play.

"But today we knew with a loss we’d be out of the tournament. The support [in Chicago] was amazing, we could feel the atmosphere from the beginning.”

Klinsmann also seemed to address criticism of his ever-changing lineups. On Tuesday, he fielded the same lineup in two consecutive games for the first time since the 2014 World Cup.

“Our hope was to build a more fluid style by keeping the guys connected, the same starting XI. That luxury we never really get for World Cup qualifiers, or at other times of the year—we’re always missing guys. We always have to improvise and fix things up.”

Ultimately, however, Tuesday’s victory means little without a result on Saturday against Paraguay in the final match of the group-stage and all three admitted as much.

Klinsmann spoke of putting the right “fuel” back into his players’ systems and said he is excited about the team’s upcoming match in Pennsylvania.

“We’re looking forward to a packed house in Philadelphia with our fans and we want to go at Paraguay.”

“Tonight was game two. It doesn’t mean anything yet. So now we get ourselves ready for Saturday.”