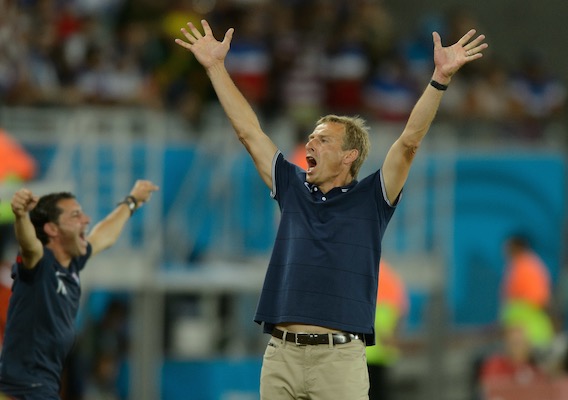 It was time to move on—there's little doubt about that. But as the Bruce Arena era gets underway, it's worth looking back on Jurgen Klinsmann's accomplishments as U.S. coach and technical director.
BY Charles Booth Posted
November 29, 2016
4:20 PM

JURGEN KLINSMANN finished his run with the U.S. men's national team with a 55-27-16 record, but he fell short of expectations on a variety of fronts. The U.S. missed two Olympics on his watch, failed miserably at the 2015 Gold Cup, and lost to Mexico in a do-or-die CONCACAF Cup match that landed El Tri in the Confederations Cup. These results, combined with two losses to open the Hexagonal round of World Cup qualifying, no doubt sealed his fate.

But it wasn't all bad with Klinsmann, was it? (No, it wasn't.) As the Bruce Arena era gets underway, here's a quick look back at some of Klinsmann's top achievements.

Leading the U.S. men's national team through the Group of Death in the 2014 World Cup will always be Klinsmann's signature achievement with the federation. The coach correctly focused all of his attention on beating Ghana in the opening game, and thanks to a late John Brooks goal the Yanks got the three points they needed. True, the U.S. would later relinquish a lead and settle for a tie against Portugal before falling to Germany in the final group stage match, but the team advanced nonetheless. Klinsmann got dinged for excluding Landon Donovan on the roster and not having a backup ready for Jozy Altidore, who would suffer a hamstring injury against Ghana. But there's no denying that his squad advanced when few thought that was possible.

If you can look past Brooks’ last two games in a U.S. shirt—tough as that may be—it's worth noting that Klinsmann was instrumental in the Hertha Berlin defender's early development. Klinsmann saw Brooks' potential early and committed to the central defender when it seemed like he might not be ready—both on the pitch and off. All of these moves proved prophetic as the German-American came into his own during Copa America Centenario and looks to be a fixture in the U.S. national team for years to come.

Brooks is not the only talented dual national that Klinsmann helped lock down. The charismatic coach managed to convince Julian Green, Aron Johannsson, Fabian Johnson, and Danny Williams to play for the U.S. when all of them could have gone in another direction. Another Klinsmann recruit likely to pay off in the future: Gedion Zelalem. The talented midfielder may not have played above the U-23 level yet but it was Klinsmann's arrival that warmed him to the idea of joining the U.S. national team youth setup. Klinsmann's undeniable charisma and resume as a star striker no doubt helped lure some of these players into the U.S. fold, and future national team coaches stand to benefit from the German's abilities in this area.

Heading into Copa America last summer, many pundits and fans believed the U.S. national team would advance from its group—and then promptly falter in the knockout stages. After a hard-fought loss to Colombia to begin the tournament, the Yanks responded with wins over Costa Rica and Paraguay to finish atop Group A with six points. And then Klinsmann's men delivered an impressive result, beating Ecuador 1-0 and moving on to the semifinals. The Yanks would go on to get thumped by Argentina, 4-0, in the semifinals and then lose the third-place game to Colombia, but there is no shame in either result. Klinsmann set a goal of reaching the Copa America Centenario semifinals and he achieved it.

After losing four of his first six games in charge, Klinsmann came through in a big way, leading the U.S. to a 1-0 victory over Italy in February 2012. It was the United States’ first win against Italy and it also snapped the Azzurri's 20-game winning streak at the Stadi Luigi Ferraris. While it was only a friendly win, and it wasn't exaclty a dominating performance, the result proved that the U.S. could go toe-to-toe with soccer's world powers, on their turf, and get a win. Klinsmann was never shy about scheduling friendlies against top teams, and would later produce road wins against the Netherlands and Germany.