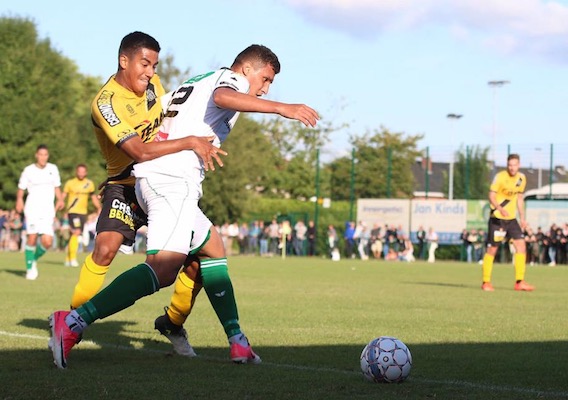 AS THE DUST slowly starts to settle from the national team’s disappointing elimination from the 2018 World Cup, one of the more positive storylines is the rise of a promising generation of American players breaking through at young ages.

By now, fans know most of the top players in the next generation, like Christian Pulisic, Weston McKennie, Tyler Adams, Jonathan Gonzalez, and Zack Steffen.

Beyond even those players, even more American players are finding their way into first-team football both domestically and abroad. One such player is midfielder Juan Pablo Torres who is now surfacing at Sporting Lokeren of Belgium’s top flight.

Torres, 18, is a native of Lilburn, Ga., and grew up in a bilingual household as the son of two Colombian immigrants. He joined Lokeren after a successful trial earlier this year and in recent weeks he began to make the bench regularly.

On November 19 he made his first start in a loss to Gent and head coach Peter Maes has publicly hinted that Torres’ time is coming.

“This season I am just trying to be as patient as possible,” Torres told American Soccer Now from Belgium, “It is my first season. For me, any minutes I get is a bonus this season. I am training hard every day and if the minutes come, they come. But I will always work to play as much as possible. Getting my first start was amazing and it was a day I'll never forget.”

Like many American players of his age group, Torres excelled at the youth levels. He began playing for local clubs starting with Georgia Football followed by Gwinnett Soccer Association. His breakthrough came at the academy level while at Georgia United who he says “helped me become the player I am today.” He spent his final year in the U.S. with the Concord Fire but at that time he had to make a decision on his future.

He had offers from college and considered it due to his family’s heavy priority on education which stemmed from his mother’s job as a school teacher. But discussions with college never progressed very far and he signed a deal with Adidas that eliminated his eligibility. While Atlanta United was just starting up close to home, Torres always had a desire to go abroad as quickly as possible.

“MLS is a great league and a great place for players to start but I always wanted to play in Europe from when I was a little kid,” Torres said. “That's where I wanted to play and develop. The trainings are very intense. It's a brand new environment and you have to learn to adapt. I felt like I had to almost do a little bit of catchup. The kids here and the youth here develop certain things at a very young age that I wasn't necessarily taught in America.

"In some little areas I had to catch up and learn but you have to do it in as quick of a time as possible—tactical things but also off-field things like eating properly.”

The trial with Lokeren was arranged by his agent and from there he earned a contract and has been progressing with the club quickly the first half of the season. As a player, he strongly prefers the No. 6 position in the defensive midfield.

Beyond Lokeren, Torres has international ambitions. He has been a part of the youth national team set-up since the U-14 level and knows many of the players of his generation well. In October he was part of the U-18 national team’s tournament in Spain and in 2018 he is expected to be part of the U-20 team as it builds toward the 2019 U-20 World Cup.

“He's tough on the tackle, he reads the game well, and he is simple and doesn't complicate things,” U.S. U-18 head coach Omid Namzi said. “That is what you want out of your No. 6. With his passing he is very good both in his short range and long range. He's a complete player and what he's added is his ability to play the ball forward. That has really helped him get to the next level.

“I think being in an environment where he trains everyday with professionals at a high level has taught him to play forward a little bit more as opposed to backward and sideways,” Namazi continued. “I think that is one thing we emphasized with him in the camp before Spain. We feel that when he went to [Lokeren] that is something that their coaching staff also pointed out to him. Now he's looking to play the ball forward. Just overall his game has elevated to the next level.”

Lokeren is well aware that competition in the midfield is tough within U.S. Soccer at the youth levels. For the U-20 team he could be vying for time with Tyler Adams and Jonathan Gonzalez. For the 2020 U-23 Olympic team, additional competition awaits with Weston McKennie and Keaton Parks also likely in the mix. But Torres is quick to point out that “with the national team, it's always going to be competitive. Good competition always brings out the best in me. You don't want it to be too easy or else you're too relaxed.”

Regardless of the competition, Torres considers these players among his closest friends and leans on them a lot in his professional career.

“We're all very close and my age group is a great group of guys,” Torres said. “Jonathan Gonzalez, Jose Carranza, Nick Taitague, these are guys I've known since I was around 13. We've been through a lot of camps—difficult times and great times. These are guys I am very close with. Nick is only a two-hour drive away. It's important the Americans in Europe to stay close and well connected with each other because it's important to know where you came from."

"You almost share the same kind of connection because if you're playing on a foreign team you have guys from Belgium, Germany, Spain, or wherever," Torres added. "But they don't really understand your American culture and where you grew up. It's nice to have that connection with those guys.”

But that connection is only galvanized with the difficult state of the national team which has no coach, no technical director, and no competitive games on the horizon. Eventually this will change and the next coach will have to pick up the pieces and move forward. But with the U.S. team missing out on its first World Cup since 1986, Torres sees and opportunity and knows that he along with the other players of his generation will be ready.

“It was devastating news,” Torres said. “It was a very sad time because every World Cup you're so used to watching the United States play and having that pride of watching your country try to win. Now that we're not going to see that, it's hard news but it is a good wake up call. You can always take a good thing out of a bad situation. Now we have to step up and figure out what went wrong. Younger players like our generation, we're part of the future. Of course we have to take some responsibility to change things because the future starts now.”