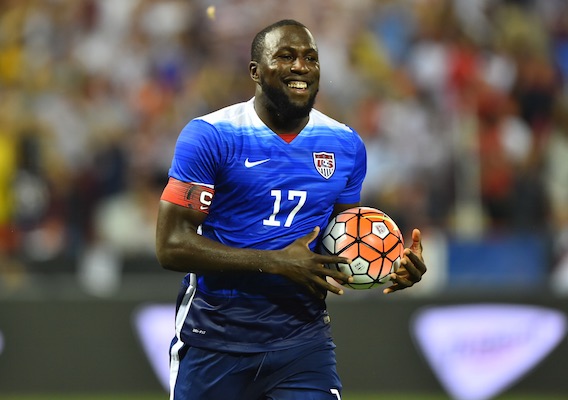 A pair of second-half goals from the man wearing the armband gave the U.S. men's national team a 2-1 victory over Peru and generated a bit of momentum ahead of an October showdown with Mexico
BY Brooke Tunstall Posted
September 04, 2015
8:10 PM

WASHINGTON, D.C.—Just when despair and dysfunction were starting to reach critical mass for the U.S. men’s national team and its blithe spirit of a coach, Jurgen Klinsmann, the Yanks rallied to quell the panic and, for now, buy the boss man a reprieve.

In its first game since a disappointing and underwhelming fourth place finish at this summer’s CONCACAF Gold Cup, the U.S. recovered from a poor first half that saw it go down a goal before responding with a strong second half and escape with a 2-1 win in a friendly with Peru before 28,896 at RFK Stadium.

After being dropped from the Gold Cup squad mid-tournament as he struggled to recover from a hamstring injury suffered last spring, forward Jozy Altidore responded with one of his strongest games in a U.S. uniform. He scored two goals and, just as importantly, used his burly, six-foot-two frame to be an effective target forward, holding the ball up and involving his teammates.

The win gives the U.S. a chance to build some momentum as it prepares for a showdown with arch rival Mexico in what is being called the CONCACAF Cup—a winner-take-all meeting next month in a Pasadena, Calif., with a berth in the 2017 Confederations Cup at stake.

Klinsmann, who refused to admit his team played poorly in the Gold Cup despite a slew of results that suggested otherwise, continued to experiment with his lineup against Peru as he searched for solutions he can use against Mexico.

In the Gold Cup, almost all the offense came through the duo of Clint Dempsey and Michael Bradley, neither of whom were available against Peru. Meanwhile, the U.S. struggled this summer to find a reliable backline combination—with promising-but-raw center backs Ventura Alvarado and John Brooks often struggling.

CLICK HERE TO RATE THE U.S. STARTERS AND SUBS

Against Peru, Klinsmann paired Brooks with World Cup veteran Omar Gonzalez in the middle, bookended by Fulham’s Tim Ream and Tijuana’s Michael Orozco on either side. Meanwhile, Jermaine Jones, who missed the Gold Cup due to injury, returned to anchor the central midfield while Alejandro Bedoya, who usually plays on the flank for the U.S., was deployed ahead of Jones and behind the forwards.

That combination struggled to create chances for Altidore and forward partner Bobby Wood in the first half and ceded possession for large chunks of the match.

The Washington area is home to a large Peruvian community and they came out in force Friday night, giving the visitors a distinct home field advantage. Such preparation should help the Americans when they face El Tri in Southern California in a month.

Those Peruvian fans were loud from before the whistle and they absolutely erupted in the 20th minute when Daniel Chavez collected a ball from Andre Carillo about 25 yards from the U.S. goal. The U.S. backline seemed well-positioned to handle the threat but instead of closing the space on Chavez, Gonzalez inexplicably dropped back, giving the shooter ample space. Carillo's shot deflected off the Los Angeles Galaxy central defender and the misdirection caught Brad Guzan off-guard, putting Peru  up 1-0.

At halftime Klinsmann made three changes. Stoke City’s Geoff Cameron came on for Orozco at right back; Alvarado replaced Gonzalez; and Mix Diskerud came on for Bedoya.

In the 58th minute, Cameron spotted Altidore in the box and connected on a long throw from the right flank and an over-aggressive Peruvian defender dropped Altidore for a penalty. Altidore took the ensuing spot-kick only to see his shot blocked by a diving save by Peruvian goalkeeper Pedro Gallesse. However, the rebound took a fortuitous bounce back to Altidore and he calmly finished in the corner of the net to even the score.

The U.S. comeback almost went for not in the 67th minute when Guzan was fored to make a flurry of elite saves from close range that will likely quiet any talk of a goalkeeping controversy with former No. 1 Tim Howard back in the mix after a 14-month hiatus.

A minute later, Altidore began another goal sequence, collecting a pass from Wood in the attacking third and springing DeAndre Yedlin down the right flank—a combination featuring current and former Sunderland players. Yedlin dribbled and attempted to cross but his pass took a deflection that found Gyasi Zardes on the left flank.

The Los Angeles Galaxy attacker has played in every U.S. game this year and he was the Yanks’ best attacker in the first half, frequently testing the Peruvians with his pace. On this play he collected Yedlin’s pass, dribbled into the box, and delivered a cross that deflected right to Altidore, who buried a one-timer from close range to make it 2-1.

Suddenly the U.S. possessed a swagger it lacked for most of the summer.

In the 88th minute, veteran defender Matt Besler—another second-half sub who missed the Gold Cup—broke up a Peruvian chance with a timely slide tackle in front of the U.S. goal. It put an exclamation point on a strong defensive display for the Yanks.

The U.S. has one last tuneup before the Mexico showdown, a Tuesday friendly against Brazil (8ET, ESPN2) in Foxborough, Mass.