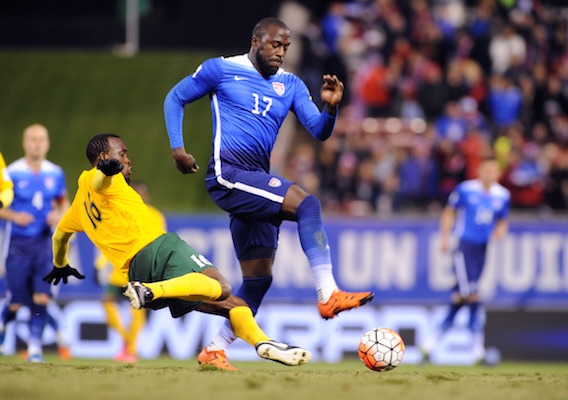 Here's a look at how individual Americans performed in Friday's lopsided win over St. Vincent and the Grenadines. Altidore's brace earned him top honors from ASN's Brian Sciaretta.
BY Brian Sciaretta Posted
November 14, 2015
6:30 AM

IN ITS FIRST WORLD CUP QUALIFIER on the road to Russia, the United States men’s national team got off to a rocky start against St. Vincent and the Grenadines but quickly responded in an ultimately dominant performance.

Many of the CONCACAF minnow’s players were not fully professional—some were painters, fishermen, or members of the small country’s coast guard—but St. Vincent nonetheless drew first blood when a poor pass from Geoff Cameron found its way to Seattle Sounders II forward Oalex Anderson, who cut past a helpless DeAndre Yedlin and fired a perfect shot past Brad Guzan for a shocking 1-0 lead.

Full credit to the United States, though, which responded quickly with an equalizer through Bobby Wood from Yedlin, shaking off his defensive error moments earlier. Fabian Johnson then scored off a free kick and Altidore off a corner for a 3-1 halftime lead.

The second half was even more dominant, too, as the Americans got goals from Cameron, Gyasi Zardes, and Altidore again for the 6-1 win.

The win will not quell the concerns over the team’s direction, nor should it. What it does, however, is give Jurgen Klinsmann's team both a chance to breathe and an opportunity to regain some missing confidence. Both will be needed on Tuesday, when the side will travel to Trinidad and Tobago for a true test. Here are my player ratings.

Brad Guzan: The Aston Villa keeper was helpless on the goal from St. Vincent but otherwise had little to do. Rating: 5.5

Tim Ream: Playing in his home city, Ream earned the start at left back and was never troubled defensively. Moving into the attack, his passing helped with the enormous possession edge, even if he was not involved in any real scoring chances. Rating: 6

Matt Besler: The Sporting Kansas City central defender had some nice passing and nearly got on the scoreboard, narrowly missing a pair of set-piece headers. Rating: 6

Geoff Cameron: Delivered a bad pass that began the sequence for St. Vincent’s opening goal but for the most part did his job—which wasn’t much. Scored with a header in the second half to give the team a 4-1 lead. Rating: 5.5

DeAndre Yedlin: Showed terrible defending on the opening goal but quickly rebounded to pick up an assist. His speed was clearly useful, although he did not leave much of a mark on the game. Rating: 5

Fabian Johnson: After being dismissed from the team in the last international window, the Borussia Monchengladbach midfielder made a quick return to the U.S. and earned a rare start on the wing—his club position. It paid off, as well, as Johnson was the team’s most effective player in the first half. He scored the go-ahead goal off a free kick and Johnson struck nice passes throughout the night. It was a strong response from the events last month. Rating: 7

Jermaine Jones: The veteran central midfielder was his usual feisty presence, forcing turnovers and roaming freely in the attack. He wasn’t as sharp as he could have been, but he picked up an assist on Altidore’s final goal. An injury might hurt his ability to be at 100% against Trinidad and Tobago, though. Rating: 5.5

Michael Bradley: The U.S captain did not get on the scoring sheet but was in command of the midfield and forced a few big saves. Rating: 6

Gyasi Zardes: Earned the start at right wing and missed a few golden chances in the first half when he clearly should have done better. He later took advantage of poor defending to take a pass from Altidore and score nice goal that gave the Yanks a 5-1 lead. Rating: 5.5

Jozy Altidore: While he was not consistently dangerous, the longtime U.S. international scored two goals to give him 31 for his international career. His move on the first-half corner kick to get open was clever, and he displayed some nice strength and control when he scored the final goal of the rout. Perhaps his best moment, however, was his smart pass to Zardes to assist on the latter’s second-half goal. Rating: 7

Bobby Wood: Normally an offensive option off the bench, Wood earned a rare start and did not disappoint. The Hawaiian’s equalizer early in the first half was important to erase the shock of St. Vincent’s opener, and he nearly had a second moments later when he took a pass from Johnson but missed just wide. Wood was consistently getting into dangerous positions and had a nice flick-on header to assist on Cameron’s goal. Rating: 7

Matt Miazga: The New York Red Bulls central defender has enjoyed a meteoric rise in 2015, in which he was one of the best defenders both at the 2015 U-20 World Cup and in Major League Soccer. Miazga had very little to do in this game, but it was important nonetheless: As an official FIFA match, the qualifier cap-tied him to the U.S. program, after Poland had shown interest in the dual-national. Rating: 5.5

Darlington Nagbe: Two months after securing his American citizenship, Nagbe made his U.S. national team debut and was likewise cap-tied despite the fact that his father, Joe, was a former captain for Liberia. Nagbe showed some nice touches and quick passes in his debut, although he was not involved in anything dangerous. He was crisp, however, and helped keep possession with a mistake-free outing. Rating: 6.5

Jordan Morris: The Stanford University forward made his first appearance for the national team since his outstanding performances in June, when he helped the United States to friendly wins over the Netherlands and Germany. Against St. Vincent, Morris was mostly uninvolved, with the Americans firmly in command and without much urgency. Rating: 5.5