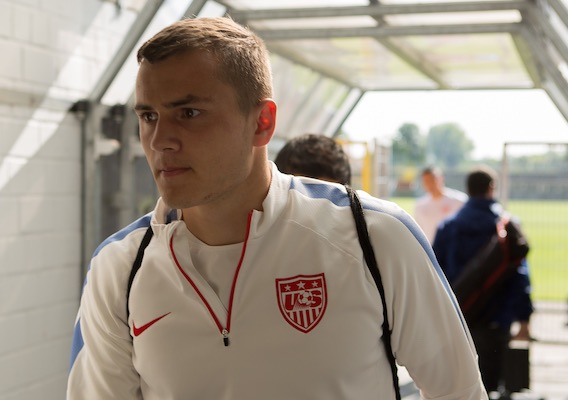 The fans didn't show up at Sporting Park in Kansas City, Kan., but Jordan Morris certainly did. The Stanford undergraduate scored twice to lead the U.S. to a 3-1 win over Canada in Olympic qualifying.
BY Brian Sciaretta Posted
October 01, 2015
11:25 PM
KANSAS CITY, KAN.—The United States U-23 men's natipnal team opened its Olympic qualifying tournament defeated Canada 3-1 on Thursday night in a hard-fought win at Sporting Park.

Nearly four years ago it was Canada that played a significant role in eliminating the United States from the same tournament. This year, however, the Americans walked away with three points and are now in the driver’s seat in group play.

The Americans entered the game playing a 4-4-2 diamond formation with Zack Steffen in goal, Matt Polster at right back, and Dillon Serna at left back. The central defense pairing from the U-20 World Cup of Matt Miazga and Cameron Carter-Vickers remained intact for their third major tournament together this year.

In the midfield, head coach Andi Herzog elected to play a diamond with captain Wil Trapp at the back in the No. 6 role, Fatai Alashe on the right, Emerson Hyndman to the left, and Gedion Zelalem in the attacking position. Jordan Morris and Jerome Kiesewetter started at forward.

The U.S. got off to an absolute dream start when it scored the game’s opening goal before Canada even touched the ball.

The sequence began when Miazga swung the ball out to Polster—who is normally a right back but is filling in at right back due to a shortage of defenders. The Chicago Fire product then played Jerome Kieswetter up the right side and he swung in a perfect cross that found Morris for an open header that flew past Canada goalkeeper Maxime Crepeau.

Thirty-four seconds into the match the U.S. held a 1-0 lead.

Canada bounced back from the early goal and had a few chances. In the 9th minute Trapp conceded a dangerous free kick and Canada’s Christopher Mannella forced Steffen to make a save. Minutes later Carter-Vickers blocked another Canada shot from inside the box.

In the 21st minute, the United States nearly doubled its lead when Hyndman delivered a perfect through ball that sent Kiesewetter into the box on the right side. The German-born attacker beat his defender and fired a left-footed shot that narrowly missed the inside of the post. Minutes later, Kiesewetter fired another shot from close range but Crepeau turned him away.

Throughout the first half Morris used his speed to bother Canada and open up the game, but his final ball was sometimes lacking and he was flagged for offside three times. The Yanks outshot Canada 9-4 in the opening stanza.

In the second half, Canada started off strong and Caleb Clarke had a clear chance early on but Steffen stopped his effort. Moments later, Carter-Vickers cleared a dangerous cross from Michael Perasso.

The U.S. team nearly found the second goal it desperately sought in the 64th minute when Hyndman hit a very nice ball that sent Kiesewetter in on Crepeau. But the FC Montreal keeper was able to come up with the important save to keep Canada in the game.

Four minutes later Canada had its best chance to equalize when a sloppy turnover sprung a Canadian counter attack. Manella took the ball and cut inside and fired a left-footed shot that forced Steffen to make a diving save.

In the 73rd minute, the U.S. team doubled its lead when Trapp hit a beautiful long ball over the defense that found Morris sprinting down the center of the field. The Stanford forward used his strength to shield the ball and then went five-hole past Crepeau to give the home team a 2-0 lead.

The game was far from over, however.

Canada pulled one back in the 81st minute off a Manella corner kick during which the U.S. defense completely fell asleep. Queens Park Rangers U-21 forward Michael Petrasso was left wide open to finish off the chance, and he did.

During the last 10 minutes, the United States held its own defensively—bending but refusing to break. In stoppage time, the Yanks secured a penalty and put the game away. \\

The hard-working Kiesewetter drew the call wide in the box when Canada’s Jeremy Gagnon-Lapare stuck his leg out and tripped the American. On the ensuing kick, second-half substitute Luis Gil stepped up confidently and fired a shot that ripped past Crepeau and into the back of the net.

With the 3-1 victory and the three points, the U.S. moves to the top of the standings in Group A. The Yanks will now face Cuba (Saturday, 5pm ET) which is coming off an impressive draw over Panama despite reportedly losing four players to defection before the tournament. A win would clinch a spot in the semifinal game, with the winner of that match locking down a spot in the 2016 Olympics in Rio de Janeiro.