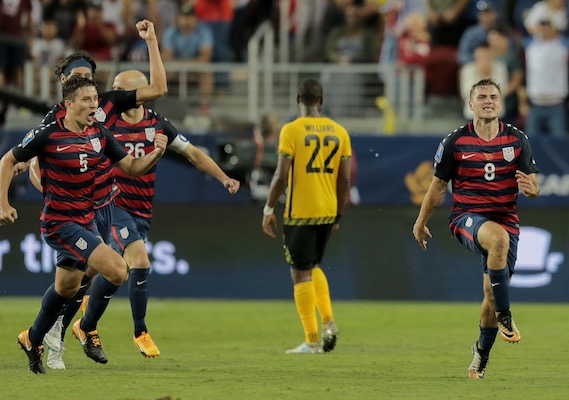 The 24-year-old striker overcame a defensive gaffe to play the hero, scoring on a right-footed blast in the 88th minute that lifted the U.S. to victory in front of 63,032 fans in Levi's Stadium.
BY John Godfrey Posted
July 25, 2017
5:00 PM
SANTA CLARA, Calif.—Jordan Morris blasted a shot past Jamaica's substitute goalkeeper Dwayne Miller in the 88th minute to lift the U.S. men's national team to a 2-1 win over Jamaica in the Gold Cup final at Levi's Stadium.

Jozy Altidore opened the scoring for the Yanks with a spot kick from 30 yards out just before intermission but Jamaica tied things up just after the break when Je-Vaughan Watson beat Morris to a corner kick and tied things up.

Morris knew he had been at fault on Watson's game-tying goal, and his late winner transformed the Seattle Sounder star from goat to hero.

It was a tense contest that featured some quality saves, a few good spot kicks, a lot of rough tackles, and plenty of botched plays. In other words, it was pure CONCACAF.

U.S. coach Bruce Arena started the same 11 players he used against Costa Rica in the semifinal—providing some clear insights as to the U.S. national team pecking order. Arena's charges didn't necessarily shine—Kellyn Acosta, Paul Arriola, and Graham Zusi all struggled—but the Yanks persevered to claim the regional championship after finishing fourth in 2015 under Jurgen Klinsmann.

The United States didn't exactly put on a clinic but Jamaica's offense was worse. The visitors were very sloppy early on, and didn't come close to threatening Tim Howard's goal in the opening half.

The first big moment of the match came in the 19th minute when Altidore let loose with a blast from just outside the penalty area. Jamaican goalkeeper Andrew Blake stopped the shot but could not control the rebound. Acosta then ran onto the loose ball and swung his foot at it but connected with Blake's wrist instead.

The Yanks could not convert on the play but Blake, one of the Reggae Boyz' biggest stars, stayed prone on the pitch for quite a while and eventually came off in favor of Dwayne Miller.

Despite a few dodgy defensive moments from both teams, all signs pointed toward a scoreless draw at halftime—but Altidore had other ideas.

It all started when Romario Williams dragged down Bradley 30 yards from goal. Referee Walter Lopez whistled for a spot kick and the U.S. captain stood over the ball with intent. But Altidore stepped in to take the kick and blasted a shot that flew into the upper corner above Miller's outstretched hand.

The Yanks tested the second stringer, and he failed. We'll never know if Blake would have made the save but everybody knew that the U.S. had a crucial 1-0 lead heading into the break.

Jamaica had only conceded two goals in the entire tournament, and relied heavily on its sturdy defense to advance to the final. Down by a goal, it would have to step up its attack.

And it did. The same Jamaican side that couldn't put a shot on goal in the opening 45 minutes pushed down the right flank and earned a corner kick four minutes into the second half. Kemar Lawrence's spot kick was hard and low and lethal and Jordan Morris, perched near the far post, allowed Jamaica's Je-Vaughan Watson to beat him to the ball and slame the ball into the back of the net.

With the score level, Arena removed a struggling Acosta from the contest and replaced him Clint Dempsey. The fiery former U.S. captain was the difference-maker against Costa Rica in the semis and Arena clearly wanted more of that magic.

But as the game pushed past the one-hour mark, the U.S. began to dominate possession and Jamaica was forced to bunker behind the ball. The home team probed the edges of the Jamaican defense, searchign for the slightest crease, as the visitors held on for dear life.

The Yanks went left, went right, and even pushed down the middle a few times, with Morris coming close to scoring in the 73rd minute with a right-footed shot. After the subsequent Jamaican counterattack came up short, Dempsey connected on a sharp header from inside the box but Miller made a huge play to get a hand to the ball, which then bounced off the upright and away from danger.

Arena then made another sub, taking the hardworking but mostly ineffective Arriola off for Gyasi Zardes.

A few minutes later, Jamaica nearly took the lead when Owayne Gordon outraced Zardes down the left flank and then dished to Darren Mattocks, who had a clear shot on goal from a wide angle. Howard stopped this one with an outstretched leg, and the game remained tied.

Zardes struggled on both sides of the ball after coming on, but he came through in the 88th minute with a whipped cross from the right. When a Jamaican clearance came up short, Morris pounced on the loose ball and emphatically struck the ball past Miller to give the U.S. a 2-1 victory and a chance to hoist a trophy.