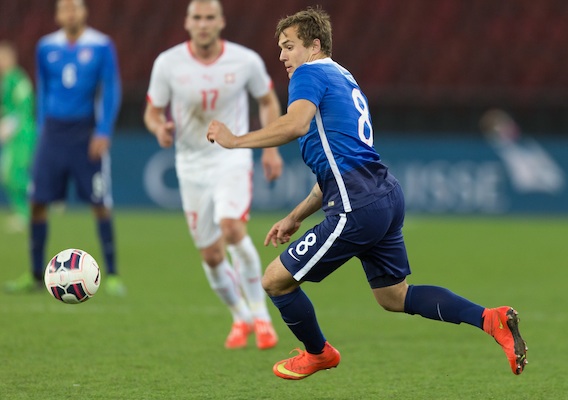 Jordan Morris on Staying in College: "It's Stanford"

The 20-year-old attacker wrestled with the decision all winter but ultimately decided to delay his professional career because he values the education he is receiving in Palo Alto, California.
BY Brooke Tunstall Posted
April 15, 2015
9:35 AM

SAN ANTONIO—At the end of the day, it’s Stanford. And an education from one of the best colleges in the world proved too tough to walk away from, at least right now, despite the allure of professional soccer.

And that's why Jordan Morris, one of the rising stars of the United States youth national team and a highly coveted pro prospect, remains a college student in Palo Alto instead of a Seattle Sounder.

A powerful and athletic forward who also has the pace and dribbling ability to play as a wide midfielder, Morris is a former player in the Sounders’ academy, and his Major League Soccer rights are held by the team that plays a few minutes from his boyhood home. But even the idea of playing for his hometown team wasn’t enough to get him to leave one of the top two or three universities in the United States.

“If it were another school then yeah, maybe, I’d have been more likely to leave,” Morris said from the basement of the Alamodome, where he’s in town with the U.S. national team for tonight’s friendly with Mexico (8:30pm ET; Fox Sports 1). “But a Stanford education, that’s pretty special and something that stays with you the rest of your life—long after your playing days.”

That said Morris did consider leaving to turn pro after his sophomore season.

“I was tempted and I almost left. I went back-and-forth every day, Morris said. “I talked it over with Sigi (Schmid, the Sounders coach) and my family and they understood,” he said.

“He completely supported my decision,” Morris said. And given that Klinsmann keeps naming the 19-year-old to national team camps, the coach is apparently unbothered by Morris’ amateur status.

(Klinsmann’s son, Jonathan, will be a freshman goalkeeper at Cal-Berkeley, Stanford’s biggest rival. If the younger Klinsmann earns the starting nod—no guarantee given the pedigree of goalkeepers at Berkeley—he will be facing Morris twice this fall.)

Morris’ decision to stay in school came as a surprise to many soccer fans and observers who expected him to turn pro after a fall that saw him become the first college player capped by the U.S. senior team since Ante Razov in 1995.

A sophomore who has scored 10 goals and registered 13 assists in two college seasons, Morris has not yet chosen a major. His father is a doctor but he won’t be following in those footsteps.

“Not while playing soccer," he said. "That would be really hard—especially at Stanford.”

First called up for a friendly against the Czech Republic in September, Morris made his senior team debut in the 76th minute against Ireland in November. He earned his second cap last month against Switzerland.

Beyond playing for Stanford, Morris has featured for the U.S. under-23 national team that in October will seek to qualify for the 2016 Olympics in Rio de Janeiro. Besides being the only amateur player on the senior national team, Morris is one of the few college players getting looks from the U-23 team.

He’s also one of a handful of players already capped by Klinsmann who is age-eligible for the Olympics. As such, Morris feels an expectation to take his national team experience and translate it when he’s with his age-group peers.

Last month in a U-23 friendly against Bosnia, Morris showed why Klinsmann is so high on him, scoring a goal and logging an assist in the game’s first 15 minutes. He’s building chemistry with Luis Gil, the playmaking midfielder from Real Salt Lake, and Mario Rodriguez, the Germany-based forward he was paired with against Bosnia and whose goal he assisted.

“I love playing with Luis—he has such great vision,” Morris said. “I feel like I have a really good understanding with him, and Mario, too.”

Morris is due back for youth national team duty next week when the U.S. U-23s take on their Mexican counterparts at StubHub Center in Carson, Calif. That will mean more missed class time for Morris, but he says his professors are willing to work around his extracurricular activities.

“They’re pretty cool about it,” Morris said. “And they’re pretty used to it, too. We have a lot of students who miss class for things they’re doing outside of school.”

And then he paused.