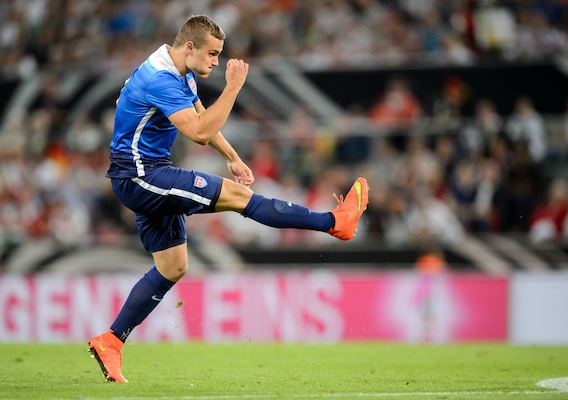 Jordan Morris Goes Under the Knife, Gold Cup in Doubt

The 20-year-old striker has been a revelation for the U.S. national team in 2015, but he is likely to miss this summer's Gold Cup due to a stress fracture. The Stanford man should be ready for the NCAA season.
BY Brian Sciaretta Posted
June 30, 2015
9:10 PM

AFTER IMPRESSING in the previous three friendlies for the United States national team, Jordan Morris is highly unlikely to take part in the Gold Cup after undergoing surgery for a reported stress fracture in his left leg.

Morris, 20, was named to the U.S. national team's previsional 35-man roster but was not selected to the final 23-player squad. Per CONCACAF’s rules for the tournament, coaches whose teams qualify for the knockout stages are permitted to make up to six changes to the roster ahead of the quarterfinal rounds which begin July 18.

For Morris to even be healthy for the final, he would have to recover ahead of the timeline provided by Stanford because four weeks from the date of surgery is July 27—the day after the final is scheduled.

This past month, Morris had the game-winning assist for the U.S. senior team in a stunning 4-3 comeback victory over the Netherlands. Days later, he would also play well in a 2-1 win over reigning World Cup champions Germany.

The next time Morris is likely to suit up for the U.S. will probably come in early September when the American U-23 team plays a pair of friendlies in England. On September 3, the U.S. will take on hosts England and then face Qatar on September 8.

Morris is expected to be a big part of head coach Andreas Herzog’s U-23 team which will host the Olympic qualifying tournament beginning in early October.