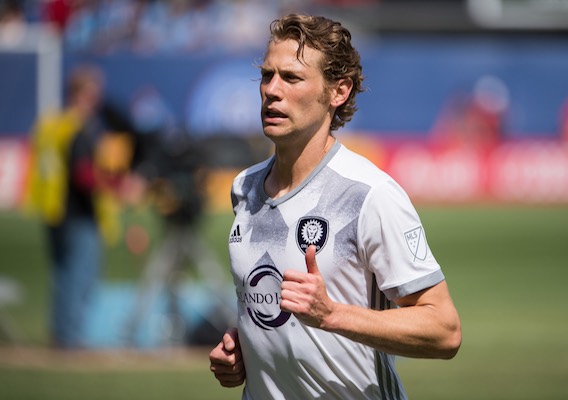 Jonathan Spector Happy to Have a Defined Role in MLS

In England, Jonathan Spector played left back, right back, central defense, and central midfield—but those days appear to be over now as the veteran has settled into a central defense role for Orlando City.
BY Franco Panizo Posted
June 29, 2017
2:00 PM

JONATHAN SPECTOR bounced around a lot during his time in England. No, he was not a career journeyman who moved from club to club, but he was an extremely versatile player who coaches moved from position to position without hesitation. Over the course of a single season Spector might train one week at right back, another at defensive midfield, and another at left back.

That is not the case. Not anymore.

Spector has found a permanent positional home since joining Major League Soccer's Orlando City ahead of the 2017 season. He is being used strictly as a centerback by head coach Jason Kreis, lining up there in all 16 of his starts. The 31-year-old Spector has been solid in those appearances, too, serving as both a leader and anchor on a back line that has at times been stifling.

He even scored a dramatic and gorgeous equalizer a couple weeks back in a home draw with the Montreal Impact.

The veteran recognizes that his flexibility was his calling card, but he's happy to have a set position in Florida.

“That was always a challenge for me," Spector told American Soccer Now. "The versatility was a gift and a curse at the same time depending on the circumstances. But now I’m playing in a position week in, week out and I know exactly where it’s going to be. It’s easier to prepare for games in that sense.

“It’s also my favorite position. It’s always what I’ve wanted to play and where I felt my best position was, but based on team circumstances and personnel I had to play at other positions throughout my career—which was never an issue, and I’ll be happy to do that here as well—but in the discussions with Jason it sounded as though central defender would be my position at the club while I’m here, which is great for me.”

By all accounts Spector has made a seamless adjustment to MLS. The Arlington Heights, Ill., native trained with the Chicago Fire before heading overseas, and Orlando City assistant coach C.J. Brown was a veteran leader on the Fire back in those days.

Still, it was a bit of a risk for Orlando to sign Spector as one of its marquee acquisitions this past winter. The club knew it needed to add a centerback with good feet and solid leadership qualities, but scouting Spector was a challenge.

“In evaluating John, it was difficult, it wasn’t easy, because he was playing right back every single game we were watching him play with Birmingham City,” Kreis told ASN. “We had to extrapolate some of what he was doing as well as the last several years back in his career when he played central defender and make some inferences and best guesses. I think in the end we were very fortunate that we feel we are correct.”

While Spector and Orlando City got off to a hot start in 2017 by winning six of their first seven games, the club has hit a major bump in the road during the past few months. Orlando City has picked up just one victory in its last 11 games, a mindboggling stat given that the Lions sit in fourth place in the Eastern Conference.

Such a bad run of form would likely have you battling relegation over in England but Spector is not keen on comparing the league he plays in now with the English Championship.

“They’re both very physical leagues, but I’m kind of reluctant to make any sort of comparisons there. The leagues are so different in how long they’ve been around and the way they’re set up. Obviously the MLS has salary caps and Designated Players and different things like that, and they’re so unique and different that I don’t really like to draw comparisons.”

What Spector would like, however, is to get back on the U.S. national team. He came close earlier this month, as he was named to the preliminary roster for July’s CONCACAF Gold Cup. Alas, the defender did not make the cut and he has yet to speak to head coach Bruce Arena about his standing in the player pool.

Still, Spector remains optimistic. He earned his first cap under Arena more than a decade ago, and thinks he still has something to offer on the international level.

“My focus is with my club, and if I’m doing well for my club then hopefully that national team call-up will eventually come,” said Spector. “It wasn’t on this occasion, which was unfortunate, but I’ll keep working for my club and hopefully eventually get a call-up for my country. At the moment my focus is solely with my club team.

“The national team is not something I can control, whether I get called in or not. Hopefully my opportunity comes and I make the most of it.”

Helping Orlando City earn the first playoff berth in its history could go a long way in helping Spector get that opportunity. The Lions are currently three points clear of the red line in the Eastern Conference, but need to find a way to put a halt to this rough run of results.

As one of the club’s leaders, Spector will have to help find a solution. He might not know exactly what that is right now, but will attempt to figure it out in the coming weeks with the peace of mind that, barring some unforeseen circumstances, he will be playing one position and one position only.

“I think he is kind of looking now in the latter stages of his career and saying, ‘I think the best position for me in the finishing moments of my career will be as a central defender,’” said Kreis. “I think he is happy with our decision.”