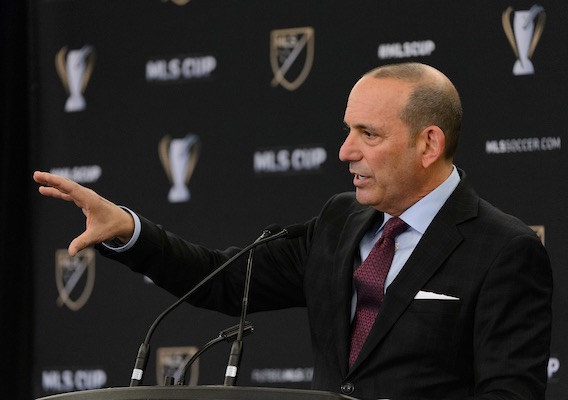 U.S. Soccer is continuing to evolve after recent years saw the creation of the GM and Sporting Director positions. Now the CEO seach will have to expand with the departure of Jay Berhalter from the federation. In MLS we have the breakdown of the new CBA. Then, on the field, FC Dallas entertains in a preseason match.
BY Brian Sciaretta Posted
February 07, 2020
7:10 AM

THURSDAY WAS a quiet day on the field without many meaningful games involving American players, but it brought two major stories in that U.S. Soccer Chief Commercial Officer Jay Berhalter announcing he was stepping down and leaving the federation at the end of the month and MLS and the MLS Players Association announcing a new Collective Bargaining Agreement that will run through 2024.

Yes, there were a few interesting stories on the field but the biggest stories were off the field.

U.S. Soccer has still not replaced CEO Dan Flynn and that position is one of the most powerful in the federation. One of those who was expected to be the front runner was COO Jay Berhalter – the brother of U.S. national team head coach Gregg Berhalter.

? | Jay Berhalter has stepped down as CCO of @ussoccer.

We are deeply grateful to Jay for his many years of service and contribution to the growth of the sport in the United States.

The prospect of a conflict of interest was well discussed and was a source of criticism of the federation. A report from The New York Times last June raised alarm about the culture within the organization. Following that there was change. But did that perhaps force the federation to move beyond Berhalter as the next CEO?

US Soccer has since taken steps to address that, conducting employee surveys, soliciting feedback, making changes. But as part of that, they also moved away from Berhalter as the heir apparent to Dan Flynn.

U.S. Soccer will now have to replace both its CEO and its Chief Commercial Officer in the near future. Brian Remidi has been serving in that capacity on an interim basis.

Of course, significant hurdles remain for the federation and may of the current problems were not the result of the federation’s front office. On the men’s national team, several positions are thin, and the team is moving beyond the lost generation. But there are also proper questions about decisions the federation has made over the past year – why did it take so long to fill the youth national team coaching positions? Is it necessary to have coaches move to Chicago? What was the culture within U.S. Soccer last summer when the Times report came out?

In terms of on-the-field quality on the struggling men’s side, it will be interesting to see how distant the next CEO is from “soccer decisions.” Federation president Carlos Cordeiro has long said he wants soccer people making soccer decisions. There is now a hierarchy in place – with Brian McBride as the GM and Earnie Stewart the Sporting Director. What will be the oversight of them from the CEO?

There won’t be a striker or lockout to start the 25th season of MLS as the league and players association agreed on a new collective bargaining agreement that will run through 2024.

Not including designated players, the salary cap will expand to $12 million per team by the end of the deal (an increase in over $3 million). The minimum salary for first team players will increase by nearly $40,000 to $110,000.

Free agency has also increased with players how 24 years or older who have been in the league for five or more years can seek free agency.

A big win for the players was the increase of charter flight usage – with it increasing up to 16 legs of travel by 2024 (up from four) and making it mandatory for playoffs.

Overall, the tone of this year’s negotiations was far different than five years ago when a strike seemed likely and there were constant leaks to the press over the status of negotiations. This year was far quieter and less hostile.

Getting it done in this fashion was a win for the league as it wants to push forward into a busy period of active expansion. For the players, salaries will also increase and there is also more freedom of movement and travel conditions.

FC Dallas played LAFC to a 2-2 draw in a closed-door preseason game on Thursday. And with the team’s growing imprint on the U.S. national team and the various different U.S. youth national teams, a lot of their news is going to be relevant to American fans.

The bad news from the game is that Brandon Servania, who made his USMNT debut on Saturday, suffered a mild sprain to his knee and will miss a few weeks. It is unclear if he will be back for the season opener but there is also the concern about his eligibility for Olympic qualifying as he is a U-23 players as well.

On the field, newly capped Jesus Ferreira scored a wondergoal with a brilliant first touch followed by a rocket from outside the box.

Whoa.. Jesus Ferreira keeping the momentum going from his #USMNT debut. Goalazzo today in preseason. Check it out pic.twitter.com/KgfROZncTM

Later in the game, U.S. U-20 midfielder Thomas Roberts connected with 2019 U.S. U-17 forward Ricardo Pepi for an equalizer and the game’s final goal. Roberts is expected to be a big part of the upcoming U.S. U-20 team while Pepi is eligible for the 2023 U-20 team as well.

As for the role these players will play for Dallas this year, it remains to be seen although they are at a club that is eager to get young players minutes.