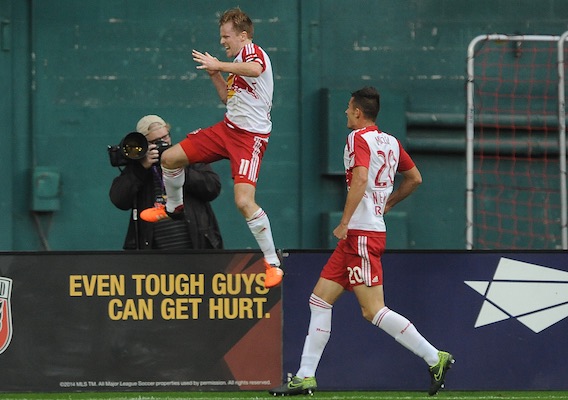 There's no guarantee that U.S. Soccer will conduct its annual January training camp next month, but if it does Brian Sciaretta is ready with his predictions for players he expects to attend.
BY Brian Sciaretta Posted
December 14, 2015
1:50 PM

THE U.S. MEN'S NATIONAL TEAM'S 2016 January camp has not been confirmed but if Jurgen Klinsmann and company do gather it could be one of the most important camps in recent years. [Editor's note: After this piece was published, U.S. Soccer officials confimed to ASN that there will be a January camp starting on the fourth.]

Last year's poor play and subpar results will have lasting implications: The U.S. men will miss out on the 2017 Confederations Cup and the U.S. U-23 team now has a huge uphill climb in order to make the Olympics.

Following the CONCACAF Cup loss to Mexico, Klinsmann said he was going to bring new and younger players into the squad. In January, with World Cup qualifiers and the Copa America Centenario looming, here’s his chance to do just that.

Here’s my best guess—for now—as to the 23 players Klinsmann calls in.

NOTES: Nick Rimando has been a staple of January camp in the past, but it’s hard to see much of a future for him at this point. A big part of getting younger means distributing these kinds of minutes to other players.

Hamid has been on Klinsmann’s radar since 2011, and this past season was a good one for the D.C. United keeper—despite his team’s poor second half. Horvath, meanwhile, has been one of the most surprising Americans abroad in 2015, as the 20-year-old earned the starting job at Molde and has since turned in several impressive performances in the Europa League.

NOTES: There are plenty of interesting options in central defense for the U.S. team, which saw Besler rebound toward the end of 2015 to reclaim his spot. Miazga was one of the best central defenders in MLS for New York, started in three major youth tournaments and received his first senior call-up last month. And a third Matt, Hedges, was perhaps the best American defender in MLS in 2015; he’s long overdue for a serious look.

Gonzalez could get a call based on his familiarity and experience, which includes games in the World Cup, Gold Cup, and World Cup qualifying. That being said, his 2015 was shaky. Will Klinsmann make him pay the price for it?

Fullbacks, however, are a big question for this team, and there are few options in MLS. Jorge Villafana was the most obvious and deserving candidate, but now, with his transfer to Santos Laguna in Mexico, he will no longer have his January open. It would seem likely, then, that Brek Shea and Robbie Rogers are given a run at left back.

Brad Evans and Andrew Farrell are not ideal at right back, but there are simply very few options there at the moment. That position could prove a wild card.

NOTES: While Klinsmann has said he wants to look at new players, it’s hard to see Jones being left off unless he signs for a European club (he is now out of contract).

But many of the others could be newcomers or relative ones. Nagbe is a near-lock considering Klinsmann’s positive comments after his debut in November, and while Finlay struggled at MLS Cup, his numbers are too difficult to ignore, especially considering the Americans’ lack of depth on the wing.

In the middle, many have pegged McCarty as the natural replacement for Kyle Beckerman, being a very disciplined central midfielder who defends well and completes a huge percentage of his passes. Diskerud has repeatedly gotten the call to join the senior squad but has nonetheless struggled to see consistent minutes on the field. Could this be a breakthrough camp to cement his spot heading into the Copa America Centenario?

NOTES: It's certainly possible that Morris will sign with the Seattle Sounders in January and begin preparations for his first professional season. If that happens, things could move very quickly and Klinsmann will likely want to keep him with the full team for this camp rather than the U-23s.

Altidore and Zardes have played so much for the team in 2015 that it’s impossible to see them not invited — unless Zardes transfers abroad, as has been speculated. Dempsey was left off the November World Cup qualifiers after a poor performance at the CONCACAF Cup, but he is still needed both for his play and for his leadership.