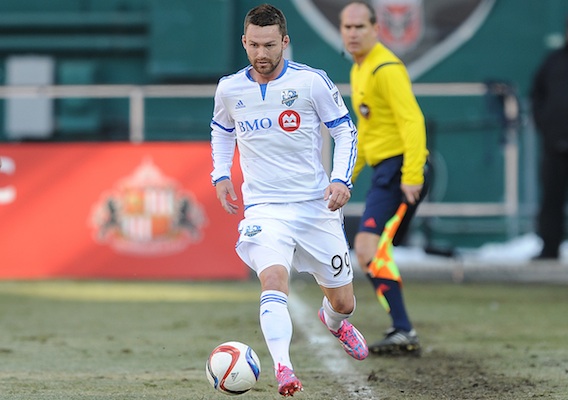 The 22-year-old forward from Chatanooga, Tenn., knows his team is fortunate to be in the CONCACAF Champions League final. But that doesn't mean McInerney and Co. lack confidence about their chances.
BY Brian Sciaretta Posted
April 21, 2015
4:35 PM

THE MONTREAL IMPACT barely escaped the first round of last May’s Canadian Championship, squeaking past NASL side FC Edmonton thanks to a fortuitous penalty call deep into stoppage time.

The Impact would go on to defeat Toronto FC and claim the 2014 Canadian title, securing passage to the 2014-15 CONCACAF Champions League in the process.

After a series of impressive (and improbable) results in that tournament, Montreal will face Liga MX powerhouse Club America tomorrow night (9pm ET, Fox Sports 2, UniMas) in Mexico City in the first leg of the continental final.

Eleven months after that crucial result against FC Edmonton, Montreal forward Jack McInerney spoke to ASN about the arduous path to the CONCACAF Champions League final—and the good fortune that helped his team stay in contention.

“We probably should have lost,” McInerney said, referencing the win over FC Edmonton in which he scored two goals. “It’s pretty amazing. That was the first step of our trip to the final. To think of where we were that day to where we are now, it makes you think what a cruel game soccer can be.

“But at the same time, it's working for us right now.”

From an MLS perspective, the last 12 months have been dreadful for the Montreal Impact. The team finished the 2014 season with six wins, 18 losses, and 10 ties—the worst record in the league. The team is winless so far in 2015 and is in dead last in the Eastern Conference.

“Obviously last year was disappointing in MLS,” McInerney said. “We feel that everything went against us. We have a ton of talented players but last year for us just not getting any results in the league—we put so much into the Champions League and looked at it as something to get away from our league results.”

A manageable draw in the CONCACAF Champions League group stages helped, as Montreal got past El Salvador’s FAS and a New York Red Bulls side that opted to rest its best players in the tournament. Montreal won the group and advanced to the quarterfinals against Pachuca.

After a remarkable 2-2 away draw to the Mexican side, Montreal won the series in the home leg when rookie Cameron Porter scored late into stoppage time, making Montreal just the third MLS team to defeat a Mexican club in the competition over two legs.

Justin Mapp and Porter, who were both crucial in the series against Pachuca, both suffered long-term injuries in the opening weeks of the MLS season even as Montreal won its first semifinal leg against Costa Rica’s Alajuelense at home, 2-0.

In the return leg, McInerney helped give Montreal breathing room in the first half when he hammered home a Dominic Oduro cross for a valuable away goal. In the end, Montreal hung on to advance to the CONCACAF Champions League final via away goals after a 4-4 aggregate draw.

“I would say that was the biggest game I ever played in during my career," McInerney said. "It was the biggest game in Montreal Impact’s history. For us to go out there and get the result we needed and for me to get on the score sheet—it was just everything for my confidence and for the club.”

If Montreal continues its streak it will be the first MLS team to win the tournament. It's already the first Canadian team to reach the final.

Equally impressive, the city of Montreal has fully embraced the team during its Champions League run. Nearly 40,000 fans assembled to watch the home win over Pachuca, and the atmosphere was electric. The win over Alajuelense was also in front of a big crowd and the second leg of the CONCACAF final is nearly sold out.

“Montreal will always be a hockey town but this is something that could be a once-in-a-lifetime event— not even for the players but for the fans as well,” McInerney said. “Everyone is just taking advantage of the opportunity. We have the chance to bring the first real trophy to Montreal and be the first MLS team to ever win the Champions League.

"It’s going to be quite an accomplishment if we do.”

The importance of the game prompted McInerney to reflect on his career. When Philadelphia picked him seventh overall in the 2010 MLS SuperDraft, he was a highly rated teenager. Last year, the 22-year-old was traded to Montreal.

While he remains without a U.S. national team appearance (despite a call-up for the 2013 Gold Cup), McInerney’s has logged 7,938 career minutes at the club level in all competitions. His 41 goals have given him a ratio of one goal every 193 minutes—roughly one every other game.

The most impressive aspect of his strike ratio is that he has found a way to be productive despite playing on bad teams. He is in his sixth professional season but has managed to play in the MLS playoffs just once, with Philadelphia in 2011. That team was ousted quickly in the first round.

Now McInerney finds himself in the spotlight as he prepares to play in some of the biggest games in league history.

“I think it has come up on everyone as a surprise,” McInerney said. “We are taking one game at a time. Each of the games in the tournament now are the biggest games some of the guys on this team have ever played—including myself.”

A victory would be massive for the player, the club, and Major League Soccer, but Montreal will be the underdog. Club America’s destruction of Herediano in the second leg of the final means Montreal will have to get past one of Mexico’s most powerful clubs—and one of the best teams in the world outside of Europe. To make matters worse, Club America plays in Azteca Stadium, an imposing venue if there ever was one.

In the second leg against Alajuelense, McInerney and Montreal had to overcome awful conditions. The turf was atrocious, the opponents were violent at times, and Montreal’s Dominic Oduro claimed he was the victim of racist chants from Alajuelense fans.

“For me, I’ve never really seen anything like that,” McInerney said of the recent trip to Costa Rica. “If you made eye contact with anyone in the stands, they were flicking you off. I didn’t feel safe being on the field. I guess that’s the true meaning of being in a fortress. We're all still kind of in shellshock that we’re going to have to do it in Mexico City, in altitude, with 100,000 people like that.”

McInerney and his Montreal teammates know they may be the heavy underdog against a talented Club America team, but that doesn’t mean the Impact believe they have reached the end of the road.

“Going into Azteca and playing in front of 100,000 people and Club America— if that doesn’t get you pumped up, I don’t know what does. We haven’t planned to far ahead to know how we’re going to play the game but we like our chances.”