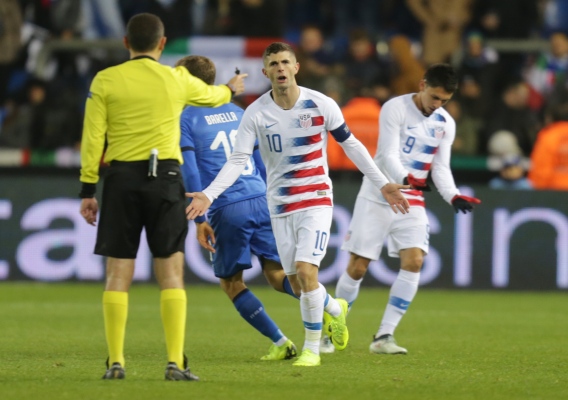 Italy completes the U.S. team's sour ending to its 2018 schedule

The U.S. team's 2018 schedule is now over and that is probably welcome news to most U.S. fans who could use a break after Italy completed the team's tailspin end to the year. ASN's Brian Sciaretta chimes in
BY Brian Sciaretta Posted
November 20, 2018
2:00 PM
THE 2018 slate of games is mercifully over for the United States national team after sent the Americans home with a 1-0 loss thanks to a second half stoppage time goal with a goal from Matteo Politano. Now the federation will move into 2019 with a new coach and likely a new vision.

After the United States failed to qualify for the World Cup, it set forth an ambitious slate of friendlies for 2018 while moving into this challenging schedule with a slate of young and unproven players, an interim head coach who had his contract extended multiple times throughout the year, and no real chain of authority within the federation until Earnie Stewart took charge as the team’s general manager in August.

The loss against Italy and the loss to England last Thursday ended the year on a sour note as the U.S. never really looked competitive in either game. No matter the formation nor the slate of players, the U.S. team did not look in synch.

With the year now over, there are a lot of fair questions to ask. With the federation and team in such an unstable state, was it the best time to be challenging such top level opponents with new players? Would it have been better to schedule opponents at the U.S. team’s level to gradually build themselves up?

Normally ASN does player ratings for each game but with such questions surrounding the system, is it fair to rate the players?

What was accomplished in 2018?


Playing a bunch of new and young players was positive. But there are three questions: will it help them in the years ahead? Did it lay the groundwork for the next coach to have a running start? Are the younger players Sarachan introduced more prepared on the international stage to limit the learning curve in 2019?

The answers to these remains to be seen but the elite level of opponents might not have helped. Can players learn much when chasing the game most of the time and having only 30% of possession? If the opponents were more evenly matched, would they have learned to play together better, improve, and gradually work their way up to being ready for top-level opponents?

The U.S. team did not look any better at the end of the year as it did in the draw against France or the loss to Brazil, or Colombia. Whether the team had Pulisic, McKennie, Adams, Acosta, Green, Delgado, Lletget, or anyone else in the midfield the team generally looked the same.


The U.S. team badly needs direction. If it is Gregg Berhalter or anyone else, there needs to be a vision that the players can follow. Sarachan did his best but as the interim head coach for over a year, his priority was to introduce a wave a new players. There was no one in place with longer-term goals.

Sarachan mostly got it right in terms of the players he identified to bring into the team. But by the end of the year, it looked as if the constant tryout nature and experimentation had run its course and it needed to be building to something.


Looking ahead to 2019, the United States national team will have a new coach who take what was learned in 2018 and move forward with it. He won’t have much time. He’ll have the two January camp friendlies with MLS-based players and only the March friendlies with the European-based players. Then it will be time to prepare for the Gold Cup next summer.

While Sarachan had 12 friendlies in charge, the next manager will not have that luxury before he has competitive games.

The good news, however, is that fortunes can change quickly in this sport. The U.S. national team bombed out of the 2006 World Cup and afterward fired Bruce Arena. Instead of playing friendlies the remainder of the year under an interim head coach, U.S. Soccer essentially shut down the national team while it tried and failed to hire Jurgen Klinsmann as the head coach.

Bob Bradley came in as a second choice in December 2006 and coached his first game the following month. The team looked energized from the start under Bradley and won the Gold Cup that year in an epic win over Mexico in the final.

The next coach will need to try to replicate that level of success and the team’s supporters could use a boost. The team hasn’t been particularly fun to follow since the 2014 World Cup and the men’s program could use a boost.