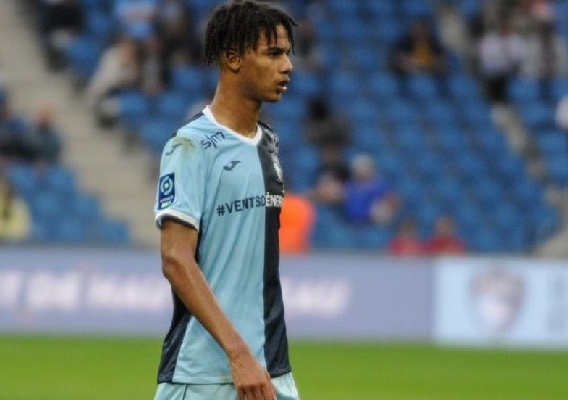 Amir Richardson, son of former NBA great Micheal Ray Richardson, has become an anchor in the defensive midfield for Le Havre and he has made some important strides in his career. In the years ahead, he will have to make some big decisions - one of which could be his international affiliation. ASN's Brian Sciaretta spoke with both Amir Richardson and his father about his past, present, and future.
BY Brian Sciaretta Posted
December 06, 2021
11:00 AM

AS THE UNITED STATES has progressed in the sport of soccer over the past four decades, the number of American players has increased dramatically – with many coming from unique and interesting backgrounds. Amir Richardson is a prime example and his love for sports stems from his father, former NBA great Micheall "Sugar" Ray Richardson.

Richardson, 19, was born in Nice, France when his father was concluding his basketball career in France. This season Richardson began making impressive strides in his soccer career where he has locked down his starting midfield job with Le Havre, which is among the six teams vying for promotion to France’s Ligue 1.

Like his father, Richardson stands at 6’5". But unlike basketball, this places him among the taller players in the game. This height has also given him a unique advantage playing mostly as a defensive midfielder. He has become an important part of Le Havre’s success helping to be a disruptive defensive presence who can cover a lot of ground playing in front of the backline. 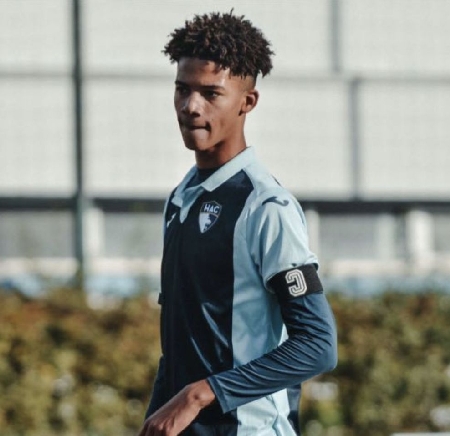 “This is my first season as a starter,” Richardson told ASN with the help of his mom translating. “I have to keep working because this is what I want and I want to stay on the field and keep this job. I actually liked to play all across the midfield, and I can play either as the No. 6 or the No. 8 and I love to play defense.  I've been playing mostly as the No. 6 but sometimes the coach pushes me forward more into the attack where I can carry the ball.”

Indeed, a lot has happened very quickly for Richardson in 2021. He transitioned between being a youth player to a first team starter, he has played for two different national teams, and he has found himself in the middle of an intense promotional race – which few expected of Le Havre this season.

“We didn't expect to be in the top five, where we are now because we have so many young players,” Richardson said. “But now that we are there, our big goal is to get promoted and move up.” 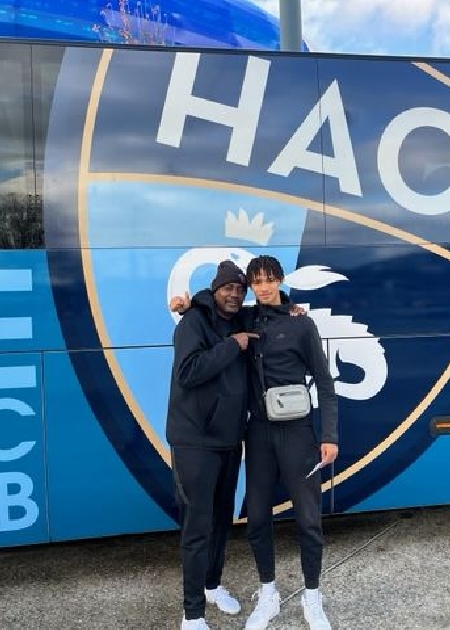 On this day, Richardson has been joined by a visit from his father – who tries to make the trip to France once or twice a year. Back home in Oklahoma, he watches all of Amir’s games with Le Havre online.

This visit, however, is particular significant because Micheal Ray is getting to watch Amir play not just as a youth or academy player, but as a first team professional.

“This year is a dream come true for me,” Micheal Ray Richardson said. “Just to see your son take these steps. I remember when he was a little kid and we would play with the small sponge ball, we were playing between each door. He was kicking it and I was trying to block it. Now see him fulfill his dreams is unbelievable for me. I am so proud of him.” 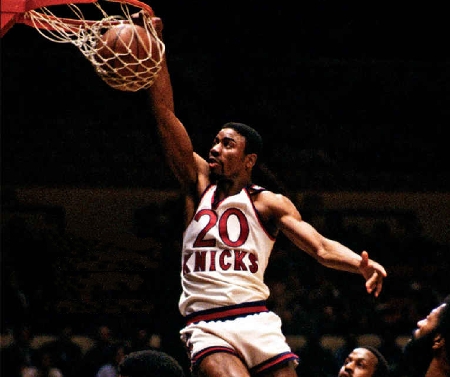 For long-time fans of the NBA, Micheal Ray Richardson needs no introduction. In 1978 after a standout career at the University of Montana., he was selected by the New York Knicks with the fourth overall pick – two picks ahead of Larry Bird. In his second season, Richardson became the third player in NBA history to lead the league in both assists and steals, setting the Knicks' records in both categories. Between 1980 and 1985 while playing for the Knicks, the Golden State Warriors, and the New Jersey Nets, he was a four-time NBA all-star, was twice named to the NBA All Defensive First Team, led the league in steals three times, and led the league in assists once.

Of course, basketball and soccer a very different but there is a lot that links professional athletes regardless of sports. Characteristics such as work ethic, the competitive drive, and the need to overcome adversity and setbacks are common across all sports at the highest of levels. 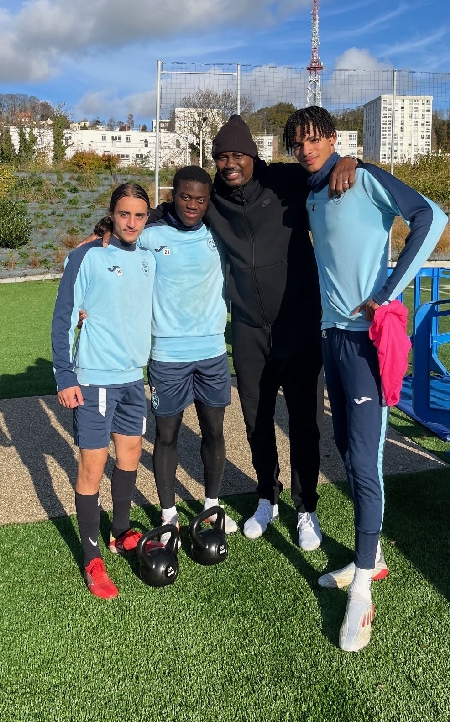 “What I try to do is just instill the work ethic,” the elder Richardson explains of how he works with his son as he progresses in his career. “Because if you work hard, it will pay off. I just tell him to keep a level head and just work, then everything else will fall into place because he's really, really talented. He has unbelievable talent… What I try to explain to him also is that in professional sports, anything can happen because a lot of times, it's out of your hands. All you can do is do your job. If you do your job, the rest will take care of itself.”

When asked if basketball was ever in the cards for Amir, his father chuckles. He quickly points out that his son loves basketball, but that he chose the right sport in soccer.

“He loves basketball,” Micheal Ray Richardson said with a smile. “During the summer when I do my camps, he would come with me in Patterson, NJ or Florida and he loved it. I used to tell him, you're good with your feet, not with your hands. I told him he has great feet, but I have great hands [laughs].”

As Amir continues to make bigger and bigger strides in soccer, there will be important decisions ahead – both at the club and international level. At the club level, his unique physical attributes and his skillset combined with his success at Le Havre could potentially attract transfer interest from bigger clubs.

On the international level, Amir received his first international callup in October when he accepted an invitation to participate in a camp with Morocco’s U-23 team, which he holds eligibility through his mother. Then in November, he played with France’s U-20 team for a week. 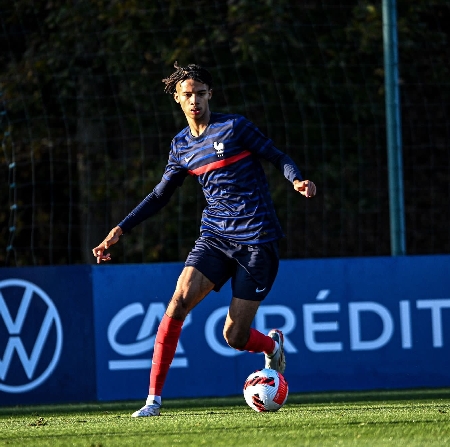 “They were both very good experiences but the experience with Morocco was a bit short because of quarantine requirements,” the younger Richardson said of the recent call-ups. “I could only play for a few days. I was able to play the entire week with France and I enjoyed. I got to mee the staff and play in a scrimmage game with Germany.”

Of course, Richardson also holds an American passport through his father but has not heard from U.S. Soccer. He is comfortable with France’s U-20 team and notes that his club is happy with the reduced travel of playing for France. While he was born in France, he was quick to point out that he is definitely not ruling the United States out should the opportunity present itself.

“I am open for everything,” Richardson said.

Richardson connection with the United States is not distant. He visited the country often growing up and still tries to make it over stateside when he can. But as he became a top young player, it became harder to come over often or for long periods of time. 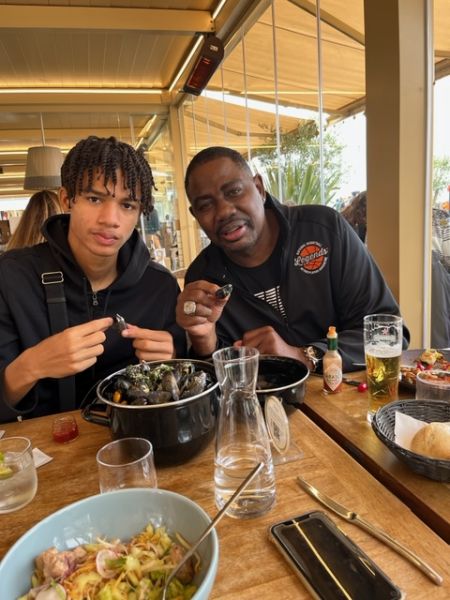 “When I was growing up, most of the time I would spend in France, but I went back and forth to the United States quite a bit and stayed sometimes four or five weeks,” Richardson said. “I've always played in high-level French academies since the age of 10, so the summers would get shorter, and I would have too many games.”

As for a potential national team choice, Micheal Ray Richardson acknowledged the decisions will be made by his son, but he is hoping that it is the United States.

“Of course I am! Of course,” the father answered when asked if he is hoping his son plays for the United States. “I am American, and America can always use great soccer players. It would be a dream come true for me.”