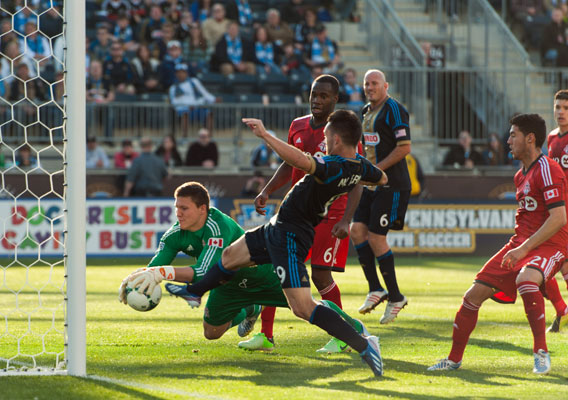 Is Jack McInerney the American Chicharito?

Blessed with a poacher's instincts and the ability to process—and act upon—nearly imperceptible shifts in the attacking third, 20-year-old Jack McInerney is primed to take his game to the next level.
ASN Slideshow

BY Will Parchman Posted
April 18, 2013
11:36 AM
OF ALL THE INNOVATIONS Ajax's Total Football introduced for the modern striker, one of its most important was demystifying the idea that the striker is a mindless whirling dervish. For decades in the early part of the 20th century, the striker and the midfielder were only nominally different, with position (not mindset and rarely out-and-out ability) being the only thing to separate the two on the field. Ajax, with all its attacking panache and position swaps, came to embody something rather different. Instead of asking its forwards to be an engine, Ajax asked its forwards to think. "Our standpoint was that we were not protecting our own goal, we were attacking the halfway line," former Ajax defender Ruud Krol once said. "That's why we played offside. You don't want to run back to defend because you are trying to save energy. Instead of running 80 meters back and 80 forward it's better to run only ten in each direction. That's 20 meters instead of 160." Ajax distended the rulebook to fit its own style, not the other way around. This wasn't the norm in a game that was still embryonic in its tactical evolution and still pervasively copycat in the way it deployed formations. Its strikers, instead of chasing balls and ducking into challenges, played offside. They jumped through the picket lines during buildups, looking to dive into channels they created themselves with their own movement. It was a radical ideal at the time, asking strikers to do physically less work to pick up more chances. But, as Ajax and subsequent teams have learned, having a forward with the ability to tag along on outside shoulders of the back line instead of constantly looking to stretch both end lines has its benefits. That lineage is strong today, and American strikers have carried the banner with particular verve. In the absence of superior foot skills, American forwards naturally took a Darwinian track toward this kind of calculating, perceptive, reactive soccer. Right place, right time, tidy finish. I'm not sure that anyone in MLS is doing it better this season than young Jack McInerney. It's easy enough to call McInerney the American Chicharito, even if it's a comparison McInerney is reticent to accept. But there is some truth in it. Chicharito has a habit of popping up in wide open positions just feet in front of empty nets. So does McInerney. Chicharito at times seems like a dogged terrier winched upright by iron cables, even in tight spaces. So does McInerney. And, most importantly for strikers, Chicharito scores big goals at big times. Even though he's just 20, McInerney has begun doing this with noticeable regularity. In six games so far this year, McInerney has four goals. That's just one off the league pace set by Mike Magee and Robert Earnshaw. But even that doesn't tell his full value for a Philadelphia Union team that has struggled to put a viable creator in midfield for quite some time. McInerney scored game-winners in back-to-back games in March, and his four goals have resulted directly in all eight of the Union's points this year (two wins and two draws won on the back of two McInerney goals). In Philly's 1-1 draw against Toronto last weekend (a game in which he ostensibly scored twice after one goal was disallowed), McInerney was directly involved with each of Philly's six best chances on goal. Earlier in his career (like, basically last year) you saw McInerney display these qualities but only in flickering strobes. He'd spin into open space and flub a chance. Or he'd have acres in front of him and not process it quickly enough. Six games into his fourth MLS season and you're already seeing his old skin molting. Here, aided by visuals, we'll take a look at critical moves in a few of McInerney's goals this year. Much like when I looked at games for a profile on Chris Wondolowski last year, you realize most of McInerney's technical prowess is surreptitious. The great lie about his game (and that of those like him) is that there is nothing more at work than being in the right place at the right time. As you'll see, there's so much more. We start here with McInerney's most recent goal, his poacher's effort that allowed Philly to salvage a draw against TFC last weekend. It's important to note that just minutes earlier, McInerney had a goal disallowed that illustrated in equal measure his predatory value. Philly had hammered away at TFC's back line all day with no release. McInerney continued to spin into space, dive into crevasses and generally pester TFC's rear guard all afternoon with no discernible effect. Until, as so many teams do, the pressure finally allowed Philly to knock the Reds over with a feather duster applied liberally by McInerney himself.

What you see here is the product of McInerney's shrewd positioning, one of the things that defines strikers of this ilk. Keon Daniel earned a deep throw-in to start this movement, and a bouncing ball is about to fall to Conor Casey, who will then shuttle in a pass that McInerney will hammer home without a defender within three feet. I thought it was so apropos that McInerney immediately whips a look to the side judge to assure he wasn't offside. He lives in that viscera between the on and offside positions to such a degree that he stretches his own credulity at times. Rinus Michels would be proud. There was some fortune in his goal. The bounce of Brian Carroll's initial swing, TFC's inability to pick McInerney up, etc. But there is a very small subsection of strikers in the world who seem to harness this "fortune" and bend it into a malleable form that fits in their game. McInerney seems on pace to join them. Next is McInerney's goal against Columbus earlier this month that helped Philly take a point on the road.

This was set up by a deft one-touch flick-on by Conor Casey, which Danny Cruz sees and turns into a break. As soon as Cruz latches onto the ball, McInerney is ahead of his marker, Josh Williams, who is beyond the point of playing the ball offside. The following still captures that perfect quick-twitch moment where the predatory players can deconstruct the organs of the play and then fit them back together again in a way way defenders cannot. McInerney is ahead of Williams. His defender is reading Cruz, who can see McInerney vibrating with kinetic energy controlled into bursts. Williams has no chance. McInerney can see it first (another trait of his that seems to be getting sharped every week), which leads to this.

It looks so simple, doesn't it? Ah, but you know better. An exploitative ability to manipulate situations is a paramount trait if you're not planning to dribble by. McInerney continues to display this ability in spades. Finally, we go back to a chilly Colorado afternoon in March when McInerney got his first goal of the season and his first game-winner. I think this entire movement sums up the progression of Jack McInerney as well as any goal he's scored.

By his position on the field in relation to McInerney, Antoine Hoppenot has options. As McInerney flashes in front of him, flanking him like a wingman, Hoppenot begins galloping forward to start the movement. Hendry Thomas has already stepped toward Hoppenot to challenge his run, and Hoppenot skipped right through as Thomas clanged clumsily to the ground. This forced center back Diego Calderon to challenge Hoppenot's run, cinching up his push forward and forcing him to make a play inside. Immediately (and I do mean immediately) sussing out the trend — Thomas is down, Calderon is too high, Hoppenot is pushing—McInerney flicks on the green light and cuts into the space underneath Calderon.

The next movement seems simpler than it is. Hoppenot is moving to his left with the ball on his favored right foot. He either has to open up his body and lead McInerney with his right or trust his weaker left, a more enticing option and what he ultimately does. As a teenager, McInerney (in addition to most hold-up strikers) almost always took the easier approach and fell back for an easy touch to assure the attack continued. Especially knowing Hoppenot's course, McInerney would have a much easier time dropping back into the architecture of the build-up and acting as part of the scaffolding. This is not what McInerney does.

It should not surprise you that a goal sliced to the opposite post was to come just seconds later. What makes Chicharito and others styled similarly so unstoppable is that they are able to make a series of incalculably atomic decisions in an infinitesimal amount of time. This kind of skill crushes these goal-scoring moments into impossibly small subsections of space that make everything except the goal almost imperceptible. You see the run of play, you see the pass and then suddenly McInerney is open, wide open, and dude, how did he get that open? It almost doesn't make sense because it looks so easy. Surreptitious. It's all subterfuge. And McInerney is, at 20, somehow well on his way to becoming a Jedi knight in these dark arts. I can hear the doubters crowing about the sustainability of this type of play. I can hear them as though they are shrieking in my ear. As the goals build, the puzzlement grows. "Yeah, the guy seems to get a lot of bounces, but if that's all it is, why does he have so many freaking goals every year? Shouldn't it vary with the bounces?" Chicharito's laugh echoes down Old Trafford's concrete battlements. He may not see it yet, but Jack McInerney is beginning to join in. Thoughts? Comments? Objections? Is there another U.S. striker who warrants the Will Parchman analysis? Tell us below.