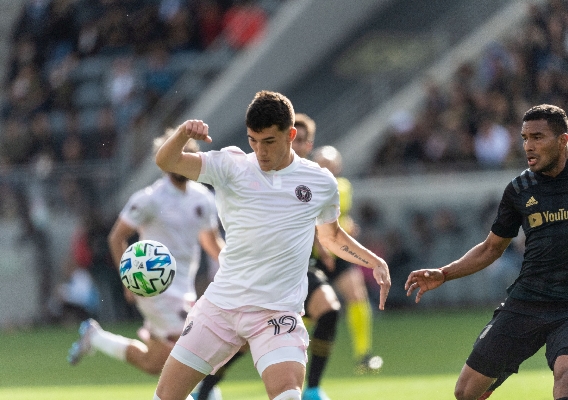 Robbie Robinson's entry into the professional game has come through two paths that are now in decline: college soccer and the MLS draft. But the South Carolina native impressed in preseason and at the start of the season. Now in Orlando for the league's restart, the U.S. U-23 eligible forward is hoping to boost Inter Miami's chances while also showcasing his talent. Brian Sciaretta spoke with the 2020 first overall pick about his path to the pros and the wild 2020 year in soccer.
BY Brian Sciaretta Posted
June 29, 2020
4:05 PM

IN A FEW DAYS, the MLS season will resume in Orlando and the hope is that this tournament will kickoff the remainder of a 2020 season that will continue into December. No one knows exactly what to expect but this is actually shaping up to be a big opportunity for the league’s younger players. Mangers will have to use squad rotation and an increased number of substitutes during their time in Orlando. Combined with the fact this is a chance for a player to make a name for himself with a lot of people watching, the enthusiasm to return to the field is high among these players.

Robbie Robinson, 21, is one such player who is eager to get on the field in Orlando next week. The South Carolina native was selected as the the number one overall pick in the MLS draft in January by Inter Miami and he looked promising starting in the season’s first two games – a 1-0 loss to Los Angeles FC and a 2-1 loss to DC United.

The COVID shutdown actually worked to his advantage as he was injured late in the first half of the second game against DC United. During the shutdown, he returned to health and is ready to go for the team’s group stage games against Orlando SC, Chicago Fire, and Philadelphia Union.

“All of us want to get back onto the field and start competing again,” Robinson told ASN from Florida. “I want to get back out there and see how we do in these games….I honestly don't know what to expect. I couldn't even tell you what to expect. They will be hard-fought and physical games. I don't know about the living arrangements but I think it will be difficult with this whole thing. We have to be very careful. It's still affecting a lot of time. I don't like to see that and I like to take precautions. That probably involves not leaving the room much, always having a mask on.”

“It's been super-difficult,” he added. “I'd be lying if I said it was anything else. You're playing and then it just stops all of a sudden and you're out of that groove. Then you're just sitting for a couple of months. Then you go back to training. I think everyone is feeling a little bit tired but it feels alright now and I think everyone is going to be ready.”

This first season as a professional has been extremely trying for Robinson and he has dealt with situations that are both in his control – and out of his control. What has come within his control are matters that involve being challenged when making the transition to the professional level.

Inter Miami is a demanding environment. The club’s ownership, led by David Beckham, attracts a lot of media attention. General manager Paul McDonough has been given a green light to spend money on young and up-coming stars like the Argentinian duo of Matias Pellegrini and Julian Carranza as well as current Mexican international Rodolfo Pizarro who is in his prime at 26. The club has also brought in Uruguayan manager Diego Alonso who has won Liga MX and the CONCACAF Champions League twice.

But while the club has spent money on foreign talent, it still views Robinson as a valuable player – although one that is still a work in progress. McDonough has challenged Robinson to spend more time in the gym. Alonso is also pushing Robinson on his work-rate and his decision making while also showing confidence to start him in the season’s first two games over players such as veteran Juan Agudelo.

“It's with men now,” Robinson said of the adjustment. “It's with men that need to provide for their families. It's different now. It's competitive but it's very fun…I learned a lot in my first few games. The speed of play is a lot quicker and you have to think fast and know what you want to do before you get the ball. It's more physical. Everything is just better - technical and tactical. For every game, I will learn a lot more by just playing and adjusting to the speed of play and having everything slow down for me."

Here are just 18 of the many reasons why Robbie Robinson is your 2019-20 ACC Male Athlete of the Year!#ClemsonUnited pic.twitter.com/twO9TdEEQa

While Alonso has been one of the key figures pushing Robinson constantly to raise his game, he has also been a huge source of support for the rookie.

“He's been very, very helpful with me,” Robinson said of Alonso. “I've had so many one-on-one talks with him - maybe if I'm not doing well or if I am homesick. He helps me with that. He's there for all of us.”

While Robinson has shown promise early in his career, young American players in attacking positions have generally found it hard to earn minutes in MLS as teams spend more money on veterans in those positions. On top of that, Robinson is also part of a declining number of promising American players who have played college soccer and entered into the league via the draft. The current trend has seen most domestic players come into the league at younger ages via the homegrown path.

Robinson was a star for a Clemson University team which has produced key U.S. players in Oguchi Onyewu and Stuart Holden. Robinson played three years for the Tigers and won the Hermann Trophy as the best player in the NCAA. But unlike college players in the days of Holden and Onyewu, Robinson was able to also be surrounded in the professional game and agreed to an academy contract in the second tier USL with the Charleston Battery.

Robbie Robinson with the turn... AND THE FINISH! No. 2 Clemson leads 1-0 in the 2nd.#NCAASoccer | @clemsonMSoccer pic.twitter.com/da1nP3LAgk

“I was training with the Charleston Battery on an academy contract and I was about to sign for them…but Clemson contacted me and I went for a visit. I really enjoyed the atmosphere and I wanted to have that experience. College taught me a lot - not just about having to deal with schoolwork but other things like cooking for myself and making sure you're doing the right things day-in and day-out.  Having that responsibility had a huge impact on me and I am very happy I went.”

For now, Robinson sees opportunity in front of him and that starts with positive steps in Orlando at the MLS is Back tournament. He hopes that if he is able to produce for Inter Miami in 2020, he can make the U.S. U-23 team for Olympic qualifying once new dates for that tournament are decided.  To this date, he has never played for the United States at the youth national team level.

His ambitions remain high and he credits his drive for his sport in helping him to get where he is today. He is a native of Camden, South Carolina – which is part of a Columbia metropolitan area that has produced very few professional players. Robinson was inspired by his older sister India who played for Furman University and led the NCAA in assists her junior season. Eventually Robinson’s love for the sport would blossom and he would watch as many Manchester United YouTube videos as he could find and admire his favorite player Cristiano Ronaldo.

But it was playing with India (who is now enrolled in medical school in Charleston) when he was a young boy which started his drive to become a player – despite playing in an area of the country that was not a hotbed in the sport .