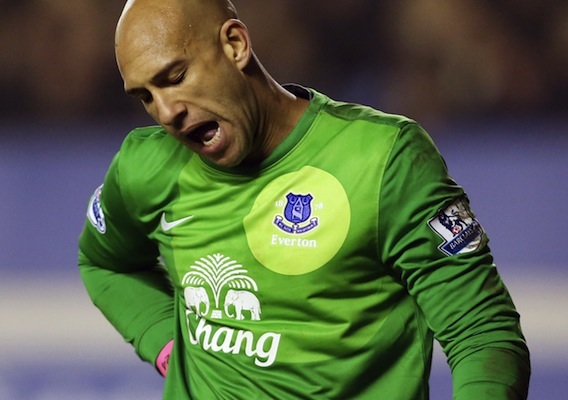 The American head coach calls 23 players into camp ahead of the United States national team's World Cup qualifiers against Costa Rica and Mexico. The team is missing some big names due to injury.
BY John Godfrey Posted
March 18, 2013
2:10 PM
Fill out your Starting XI here and earn a chance to win a trip to the World Cup in Brazil. WE'LL BE DISSECTING this roster from all sorts of angles throughout the week, but first things first: Here are the 23 names Jurgen Klinsmann called in for the U.S. World Cup qualifying matches against Costa Rica (Friday) and Mexico (March 26). GOALKEEPERS (3)
Brad Guzan (Aston Villa), Sean Johnson (Chicago Fire), Nick Rimando (Real Salt Lake) DEFENDERS (6)
Tony Beltran (Real Salt Lake), Matt Besler (Sporting Kansas City), Geoff Cameron (Stoke City), Omar Gonzalez (LA Galaxy), Clarence Goodson (Brondby), Justin Morrow (San Jose Earthquakes) MIDFIELDERS (9)
DaMarcus Beasley (Puebla), Kyle Beckerman (Real Salt Lake), Michael Bradley (Roma), Joe Corona (Club Tijuana), Maurice Edu (Bursaspor), Jermaine Jones (Schalke), Sacha Kljestan (Anderlecht), Brek Shea (Stoke City), Graham Zusi (Sporting Kansas City) FORWARDS (5)
Jozy Altidore (AZ Alkmaar), Terrence Boyd (Rapid Vienna), Clint Dempsey (Tottenham Hotspur), Herculez Gomez (Santos), Eddie Johnson (Seattle Sounders FC) IN GOAL, we got what we expected. The injured Tim Howard will be missed but the three men called in should do a good job in his stead, with Brad Guzan the likely starter for both matches. The big story is the DEFENSE. Five top American defenders—Edgar Castillo, Timothy Chandler, Steve Cherundolo, Fabian Johnson, and Jonathan Spector—will all miss the Hexagonal matches due to injury. Despite being healthy, one-time captain Carlos Bocanegra was left off the squad—presumably due to inactivity. This places a huge burden on a young, inexperienced defense corps that features four combined international appearances between them: Beltran, Besler, Gonzalez, and Morrow. Unless a midfielder slots back into defense, at least two of these players will be starting in these crucial matches. It's a frightening prospect for American supporters. Even the perennially optimistic Jurgen Klinsmann has got to be feeling a little uneasy about this group too. The only natural fullbacks here are Beltran and Morrow, and both Costa Rica and Mexico are sure to target them early and often. Will they step up? Will they take a back step? It will be fascinating to see. THE MIDFIELD is missing two key players too, as Torres (hamstring) and Williams (illness) will miss the Hex contests. In their place, Klinsmann called up Beckerman and Corona, probably to serve backup roles. Torres' ability to provide width will be missed, and Williams' strength in front of the (depleted) back line might have come in handy. Beckerman is a solid No. 6, but the veteran has lost a step and may no longer be up for the speed of the international game. In terms of wide players, Klinsmann has plenty to call on within this roster. Beasley, Kljestan, Shea, and Zusi are all capable on the wings, and Klinsmann will have to craft a gameplan that 1) incorporates all-but-certain starters Jones and Bradley and 2) allows for some width. AT FORWARD, all is well. Great, actually. But with Landon Donovan out of the picture—more on that later—will the forwards receive enough service? And most importantly, how is the United States going to stop the Costa Rican and Mexican offenses with that back four? What are your thoughts on the roster? Confident? Petrified? Please tell us below.