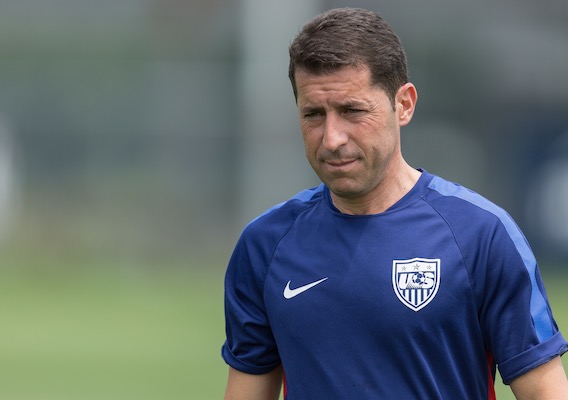 The United States under-20 national team made history by winning its first-ever CONCACAF Qualifying Tournament in March. It will need to improve on that effort to make any noise in South Korea.
BY Brian Sciaretta Posted
May 17, 2017
7:00 PM

THE UNITED STATES U-20 TEAM is now in South Korea for its final preparations ahead of its World Cup opener on Monday against Ecuador. There are reasons for American fans to feel both optimistic and pessimistic about this team. At its recent camp in Japan, Tab Ramos' squad defeated Japan 2-1 behind two goals from Lagos Kunga and then it lost to Portugal 2-1 with the lone American goal coming from Tyler Adams.

This team will participate without its best players. In 2009, Thomas Rongen’s U-20 side went to Egypt without Freddy Adu and Jozy Altidore. This team is even more shorthanded, missing the likes of Christian Pulisic, Weston McKennie, Joshua Perez, Nick Taitague, and injured right back Marlon Fossey. There is also the chance that central defenders Cameron Carter-Vickers and possibly Justen Glad will also be ruled out due to injury.

On the bright side, the Yanks will not be in the group of death this time around. In 2013 the U.S. paired with Ghana, France, and Spain, and with four third-place teams advancing out of the first round, it is very possible that the Americans will advance.

So for you American fans set to wake up at odd hours to watch the next generation of U.S. players, here is what you need to know.

In March, when the United States won the CONCACAF U-20 title for the first time in its history, it mostly played in a 4-3-3 setup, occasionally shifting to a very similar 4-2-3-1. Expect more of the same in South Korea.

Additionally, Ramos has two central midfielders, Gedion Zelalem and Eryk Williamson, who can either play in an attacking role or in a more withdrawn position.

Finally, midfielders Derrick Jones and Tyler Adams have both played a lot in MLS so far this season and can give the team a more defensive edge in both breaking up plays and covering a lot of ground. Erik Palmer-Brown excelled in the defensive midfield position in qualifying but he is likely to shift back to central defense at the World Cup.

The backline is loaded with injuries. Palmer-Brown, Tommy Redding, Justen Glad, and Cameron Carter-Vickers are the central defenders. Carter-Vickers and Palmer-Brown are the likely starters but injuries will influence the Starting XI. Marlon Fossey’s injury means that Ramos will likely start Aaron Herrera at right back and Danny Acosta at left back or shift Acosta to right back and start Auston Trusty at LB.

Can the offense score goals?

A big cause of concern for this team in qualifying is its goal scoring. Ramos was quick to point out last week that his team generated a lot of shots en route to the CONCACAF title but that finishing was a concern.

Ebobisse was the leading scorer throughout the cycle but he went goalless in qualifying. Sabbi was a favorite of Ramos early in the cycle but he never was cleared to play for Las Palmas and essentially did nothing the past year and only recently began training with Columbus Crew SC to stay sharp.

The hope for Sabbi and Ebobisse is that training in a professional environment in recent weeks will help raise their game. Ebobisse was in preseason form during qualifying and Sabbi was extremely rusty.

That leads us to Josh Sargent. The St. Louis native was the biggest and most surprising inclusion of the team as he recently starred for the U.S. in the U-17 World Cup qualifying campaign. He is now getting moved up an age level.

Moving from the U-17 team to the U-20 team is a huge jump for a young athlete but Ramos and U.S. Soccer must have some sort of combination of frustration with the existing forward options as well as the belief that Sargent is a special talent.

Either way, expect Sargent to play meaningful minutes in South Korea. He is not just along for the ride. Ebobisse and Sabbi went scoreless in the two tune-up friendlies and Sargent has played more games the past month than any other forward. At this point, he seems most likely to bury a decent chance.

Can the defense hold up?

After World Cup qualifying, it seemed as if the No. 1concern was the team’s lack of offense. The truth, however, is the opposite. The defense carried the day in Costa Rica and now it faces real questions.

It's unreasonable to expect the defense to completely suffocate opponents like it did in CONCACAF and win games by only picking off a set piece goal here or there. And the team is dealing with significant injuries along the backline and first-team minutes at the club level are scarce. Glad joined the team late after passing a physical and Carter-Vickers is attempting to hurry back from a knock.

Even if both Glad and Carter-Vickers are cleared, there is the issue of rust. Neither Carter-Vickers nor Glad have played in months. While it is impressive that Carter-Vickers has frequently made the bench for Tottenham’s first team, he hasn't seen steady action either for the senior side or for the reserves.

But that is far from the only concern on the backline. Palmer-Brown, the captain, was injured in the CONCACAF final and it took him a while to return to full health. Since then he has only been seeing minutes in the USL with Swope Park Rangers.

Jonathan Klinsmann will once again start in goal in South Korea and it remains to be seen if he can make the big saves. Every successful U.S. U-20 team has had very good goalkeeping, from Chris Seitz to Zack Steffen. While Klinsmann has had some good games for the U.S. this cycle, he is not yet at the level of previous U-20 goalkeepers.

For any kind of success, the team’s offense must improve from World Cup qualifying. The good news is that it probably will.

Real Salt Lake winger Brooks Lennon, on loan from Liverpool, is the most dangerous attacker on the team and he has played well to start the season. Sebastian Saucedo struggled in qualifying but he has the benefit of being in midseason form. Luca de la Torre was on the verge of joining Fulham’s first team the past month.

But there are wild cards too that are tough to read.

Sabbi has been a mystery all cycle and arrives in South Korea after essentially a wasted year Is his recent training with Crew SC enough to elevate his form? Atlanta United academy winger Lagos Kunga was a surprise inclusion and had two goals against Japan after a solid camp in London last month. Is he going to be a game-changer? University of Maryland’s Eryk Williamson has been a mainstay all cycle and Ramos likes him but has he kept up his form in the long college offseason?

Then there is Arsenal’s Gedion Zelalem. Two years ago, at age 18, he arrived at the U-20 World Cup with a ton of hype after Jurgen Klinsmann said he was ready to help the full national team at that moment. The past two seasons produced mostly disappointing loan spells to lower-division teams. While he is typically a box-to-box midfielder, Zelalem might be asked to assume some of the playmaking responsibilities in an advanced position.

This U-20 World Cup is a big opportunity to revive his career. But is he up for it?

With the team’s defense suffering injuries and the offense needing to show improvement, Ramos must get consistent play from his central midfield. These positions were primarily where the team succeeded the most to win CONCACAF. Palmer-Brown played as a defensive midfielder and was the player of the tournament in Costa Rica although he will likely shift to the backline.

Tyler Adams is one of the youngest players on the team and could be the U-20 World Cup captain in 2019. He is now a starter for the New York Red Bulls and has shown tremendous growth in 2017. He must play with a maturity beyond his years and Ramos will need for him to play a less free-ranging role than he is used to with New York.

Similarly, Derrick Jones might also get a start alongside Adams in a 4-2-3-1 formation. The promising Philadelphia Union product from Ghana only recently became eligible to play for the U.S. team. He might slide into the position Palmer-Brown played in qualifying.

There are other options too. Eryk Williamson has been practicing in this area of the field recently and could see time in the deeper midfield positions.

The starting lineup will likely change slightly throughout the group stage but my prediction is a 4-2-3-1 formation with these players.

I think most of the lineup speaks for itself but I think Glad and Carter-Vickers are just too banged up at the moment to assume they’ll start.

The injuries and lack of first-choice players available should temper enthusiasm for the U.S. team in South Korea. There is talent on this team but there are also serious holes. Klinsmann will have to make big saves and the forwards must be more clinical with their opportunities.

Unlike 2013, it will not take a miracle to advance from the group but it will be an uphill climb. There are many players who are wild cards at this moment in their careers and most of these types of players will have to play up to their potential for success. That is asking a lot.

I think the United States will advance from its group—barely. After that, it will come down to the form of its next opponent and a whole lot of luck to return to the quarterfinals.