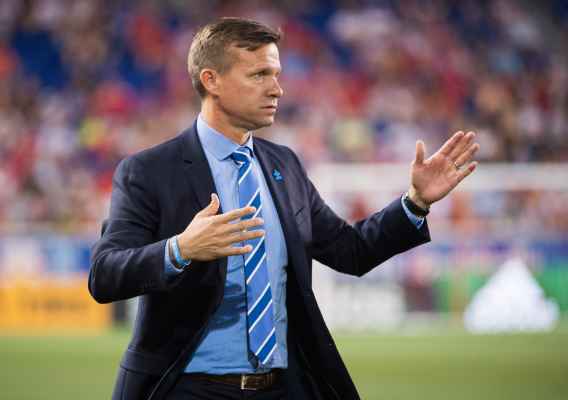 In an important step for American coaches, Marsch to take over Salzburg

In an impressive step in the history of American coaching, Jesse Marsch will take over the Red Bulls Salzburg after previously serving as the assistant of RB Leipzig and the head coach of the New York Red Bulls. The Wisconsin native will take over a team heading to the Champions League and expectations will be high for the Wisconsin native.
BY Brian Sciaretta Posted
April 14, 2019
10:30 PM
AFTER BEING RUMORED for several months, it is now official as Wisconsin native Jesse Marsch will be the next manager of Red Bull Salzburg which sit atop the Austrian Bundesliga. It is one of the most import developments ever in terms of Americans coaching the sport.

Marsch, of course, was most known to American fans as the coach of the New York Red Bulls from 2015 through the start of 2018 when he left to take the assistant coaching job at RB Leipzig in the Bundesliga.

But as Marsch’s stature grew, it became rumored he was going to leave to take a job in Europe as he was frequently traveling abroad for courses in obtaining his coaching licenses. That came to pass in the summer of 2018 when he moved abroad to take a high-ranking assistant coaching job with RB Leipzig.

Leipzig has indeed had a strong season with Marsch on its staff and the club now sits in firmly in third place with a seven-point cushion on a spot next season in the Champions League.

Marsch will now continue to remain in the Red Bull family as he takes over a very good Salzburg team that is cruising towards the Austrian Bundesliga title and should earn a spot in next year’s Champions League. To date, no American has ever coached in the group stages of the UEFA Champions League (American-born John Caulfield coached in the early qualifying rounds in 2018 with Ireland’s Cork City). Marsch will take over for a very highly regarded Marco Rose who accepted a job with Borussia Monchengladbach last week.

Like his mentor, Bob Bradley, Marsch is indeed a trailblazer in terms of American-born coaches. American coaching success outside of the United States has been limited with Bob Bradley’s brief tenure as the coach of Swansea City the most high-profile example. But Bradley’s tenure at Swansea was murky as the club was not run well in upper management. and is now in a quagmire in the Championship. Former U.S. international David Wagner also achieved a lot of success getting Huddersfield promoted to the Premier League and avoiding relegation in its first season. But Wagner was born and raised in Germany and viewed far more as a German throughout Europe.

Unlike Bradley, Marsch will be inheriting a team with more talent and direction to succeed within its own league. As the Red Bull organization attempts to keep a uniform culture and style within all of its clubs, Marsch should be comfortable in his new setting and should not need much of an adjustment period as he has been well immersed in the system in both New York and Leipzig.

But Marsch will also inherit a hefty set of expectations on him. The team will be expected to win another Austrian title and punch above its weight in the Champions League. Marsch is not a desperate pick to run a struggling team after all other options had failed but rather Marsch is hand picked to run a smooth-sailing team that expects to win silverware.

Success with Salzburg could put Marsch in-line for even bigger opportunities down the road – perhaps maybe even the United States national team someday.