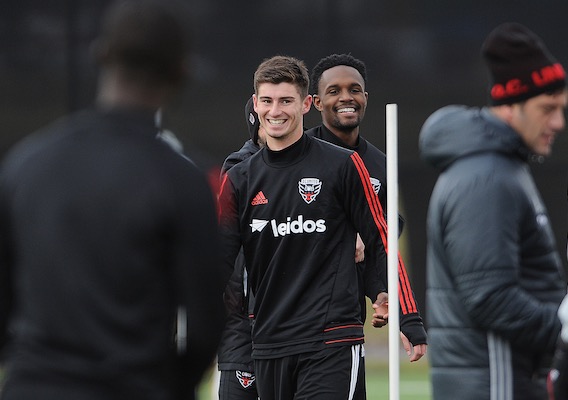 Ian Harkes: "I've Enjoyed Every Minute of It So Far"

The 21-year-old D.C. United midfielder is ready to play the role his father once played for one of Major League Soccer's original franchises. ASN's Brian Sciaretta spoke to the young talent about the coming year.
BY Brian Sciaretta Posted
March 02, 2017
12:10 PM

WHEN MAJOR LEAGUE SOCCER came into existence in 1996, D.C. United quickly became the marquee team, winning the first two championships thanks in large part to captain John Harkes and head coach Bruce Arena. The last few years have not been so kind but there is plenty of reason to believe the club is on the right track.

This week D.C. United broke ground on its new stadium at Buzzard Point and 2017 will mark the team’s final year at RFK Stadium. But as this era comes to an end, it seems very likely that a link to the past will remain as John Harkes' son, Ian, establishes himself on United's roster.

Harkes, 21, is one of the most highly touted rookies in MLS. He dazzled in college at Wake Forest, winning the Hermann Trophy in January on the strength of his outstanding senior season. Both John and Ian have won that prestigous award, the first father-son duo to make that claim.

Ian has benefitted from his father’s advice and training over the years—and certain memories from those early MLS years remain strong.

“Some of the earliest memories I had of my dad were later in his career,” Harkes told American Soccer Now. “When he was with D.C. I was one or two but I still connected with the club. I really remember his retirement match when he came back to D.C. and it was farewell match—getting to be out there on the field and see the support from people and see how much he impacted the club. That was big part of my life with D.C.

“It's always been a part of my childhood just because of how close it was and I'd go to games all the time when I was younger with my parents or friends,” he added. “I'd even have birthday parties there. It was fun watching a team you love—and now being a part of it is really exciting and a huge chapter in my life.”

Born in England while his father was playing for Derby County, Harkes grew up in the D.C. area, became a United fan, and eventually joined its academy program. He ended up staying in college all four years at Wake Forest at a time when many top American players are feeling pressure to leave school early or bypass college altogether.

“I was definitely more of a late bloomer in my high school years—I had breakout years my junior and senior seasons,” Harkes explained. “In my freshman and sophomore years, I definitely had thoughts that I could potentially go pro. My parents were a big part of me staying disciplined and getting my degree.

"They felt—and I felt—that going through my last two years at Wake helped me grow as a player and I had to develop certain areas of my game that maybe I didn't have my sophomore year. It actually turned out to be a really good decision. The college game was still enough to challenge me. I was glad that I stayed and got my degree as well.”

Following his senior season Harkes traveled to England and had a brief trial with Derby County but D.C. United had a homegrown offer on the table and there was pressure for him to make up his mind quickly. United provided an opportunity to play first-team minutes, which influenced his decision to begin his careeer stateside. Still, Harkes admits that returning to England or Europe is something he would like to do later in his career.

Adjusting to the professional game will be a different experience but there are high hopes that Harkes can fill the team’s desperate need for a box-to-box midfielder.

“I’ve known Ian nearly his entire life and have watched him develop into one of the nation’s best young talents,” head coach Ben Olsen said. “He has all the tools to succeed at the next level and I look forward to being a part of his pro career.”

MLS rookies have prospered in recent years. Cyle Larin was Orlando's top pick in 2017 and scored 17 goals for the club. In 2016, Jordan Morris proved to be an essential component for Seattle and helped the team win MLS Cup. Unlike those two players, Harkes is not a forward but he has a nice contingent of players around him including Luciano Acosta and Marcelo Sarvas in the midfield along with an established backline consisting of Steve Birnbaum, Bobby Boswell, Sean Franklin, and Taylor Kemp.

If Harkes can live up to his potential, there is every reason to think that this team could return to being among the league’s best at a time when a move to a new stadium is looming. And for one of the league’s most storied teams, United could be back on top with a familiar name leading the way.

“There is a lot of excitement,” Harkes said. “Every year the club is chasing titles. The team puts all of the pressure on themsleves and they don't worry much about outside pressure. To push ourselves to the highest position possible is always the goal. Especially to do it at the last year of RFK and into a new stadium would be tremendous for the club. A lot of people are really looking forward to that but finishing it out strong this year is something really important.

“It's been really exciting and I've enjoyed every minute of it so far.”