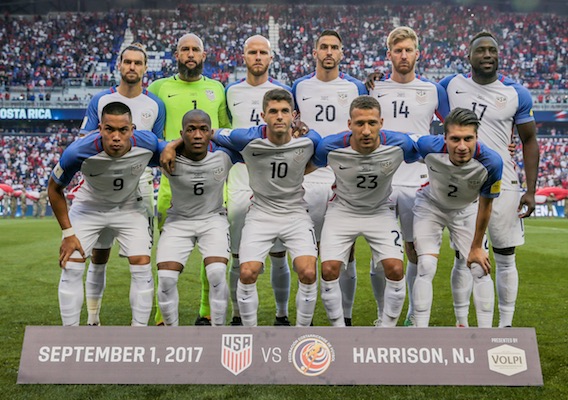 Howard, Ream & Cameron Take It on Chin in Ratings

The U.S. men's national team lost to a hungry, talented, focused Costa Rican team on Friday. Here are Brian Sciaretta's player ratings—and here's hoping that you will go create your own assessment too.
BY Brian Sciaretta Posted
September 01, 2017
7:55 PM

THE UNITED STATES MEN'S NATIONAL TEAM dropped its second home qualifier of the Hexagonal Friday night, losing 2-0 to Costa Rica. The better team won this game as the Ticos executed a perfect game plan, leaving the Yanks in a perilous predicament.

The U.S. got very little from its forward combination and allowed its best player, Christian Pulisic, to be neutralized by the visitors. But the biggest story is that the team was let down by a central defense pairing that was shaky all game long. Fulll credit has to go to San Jose Earthquakes forward Marcos Urena who was clinical with his chances and made the Americans pay—twice.

Here is how the individual U.S. players performed.

Tim Howard: The American icon didn’t make a big save in this game and was out of position on Costa Rica’s opening goal—where he was beaten on a tough angle. He is really going to wish he had that one back. Rating: 4.5

Jorge Villafana: The Santos Laguna left back didn’t make any defensive blunders but he pushed forward a lot and had nothing really to show for it. Rating: 5

Tim Ream: The Fulham central defender is having a good year for his club but had a very rough game in front of his former home crowd. Minutes before Costa Rica’s opener, he nearly gifted the Ticos a goal. He wasn’t great on the opening goal either although he did force Urena out wide to a tough angle. Overall it was a game to forget. Rating: 4

Geoff Cameron: While he has been one of the best and most consistent American players for several years, Cameron had a terrible game for the United States—perhaps the worst in his career. Not only was his positioning off but his distribution out of the back was also severely lacking. Rating: 4

Graham Zusi: It was actually a pretty good game from Zusi at right back. He swung in some dangerous crosses and generally contained his side of the field. Rating: 5.5

Michael Bradley: The U.S. captain was the best American on the field. He forced turnovers and helped create many of the best offensive opportunities for the Yanks. Rating: 6.5

Darlington Nagbe: As always, he showed some skill and nice ball possession but a final shot or a dangerous pass was non-existent. He rarely played Jozy Altidore or Bobby Wood into scoring opportunities: Rating: 5

Fabian Johnson: It was a brutal outing from Johnson, who has had a bad year for both club and country. He was invisible for long stretches and rarely part of any promising offensive maneuvers. The U.S. could have used a big performance from him but his poor showing allowed Costa Rica to concentrate on containing Pulisic. Rating: 4.5

Christian Pulisic: It was obvious that Costa Rica came into the game with the main priority of containing Pulisic. When the Borussia Dortmund attacker broke free, Costa Rican defenders fouled him hard—and the yellow cards were well worth it. Pulisic was dangerous at times but even he wasn’t able to send in an effective final ball or shot. Rating: 6

Bobby Wood: The Hawaii native was starved for service and generally unproductive whenever he was able to get involved. With Altidore drifting to receive passes, Wood needed to be better making dangerous runs. Rating: 4.5

Jozy Altidore: The Toronto FC forward did not have any chemistry with Wood. He was in a dangerous position a few times but couldn’t finish. His passing wasn’t great in the final third. His best moment came in the first half when he probably should have drawn a penalty. Rating: 4.5

Clint Dempsey: The Seattle Sounders forward tried to press hard for an equalizer and help manipulate the ball in the final third. In the end, he came up empty—just like everyone else. Rating: 5

Jordan Morris: Morris came on too late to earn a grade: Rating: NR

Paul Arriola: Arriola came on too late to earn a grade: Rating: NR

Bruce Arena: On paper, Bruce Arena made many of the right choices. But there were four main errors he made that cost the team the game.

1. Pairing Ream and Cameron in central defense was awful. There was zero chemistry. Did these two perform well in training or was Arena simply choosing his starters based on club form?

2. The Altidore-Wood pairing up top stunk. Arena seemed to be trying to get the two best forwards on the field together but they are not an ideal combination. Wood plays alone up top at HSV and Altidore is partnered with an explosive Sebastian Giovinco in Toronto. Pairing two slower forwards up top was not the answer against an organized Costa Rican defense that was a match physically for them.

3. Arena overestimated Johnson’s ability to contribute. Johnson has been out of form his entire year and dealing with an injury in recent weeks. Johnson was the worst of the four U.S. midfielders on Friday.

4. Arena made his substitutions way too late. Dempsey should have started the second half. Morris and Arriola should have come on earlier, and Johnson should have been removed.

Hopefully Arena learned a lot from this game. Rating: 4.5