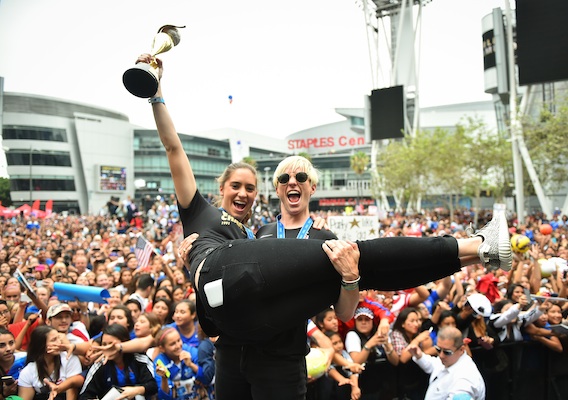 How Will the U.S. Women Approach 2016 Olympics?

They came. They saw. Carli Lloyd scored a hat trick. So what's next for the United States women's national team? ASN's John D. Halloran looks ahead to the 2016 Olympics, which are just around the corner.
BY John D. Halloran Posted
July 08, 2015
10:30 AM

WHAT'S NEXT FOR the United States women's national team?

With a third World Cup title in the books, the U.S. women will deservedly spend the next few days, weeks, and even months celebrating their win. But before long the squad will have to get back to work.

That's because the other major championship in women's soccer is the Olympics, which gets underway in Rio de Janeiro next summer. Unlike in the men's game, the women's regional confederation championships are generally not considered major tournaments and there is no Confederations Cup. The Olympics, however, which on the women's side has no age restriction (the men's Olympic tournament is essentially a U-23 competition), is considered a major prize.

Over the years the U.S. women have enjoyed near-complete domination of the Olympic games, winning the tournament in 1996, 2004, 2008, and 2012. But with only five months until qualification begins, the team will have several questions to answer in the weeks ahead. Here are three of them.

While the 2016 Summer Olympic tournament is still over a year away, qualification will take place this January.

As originally reported by Steven Goff, the U.S. women will play 10 celebratory home friendlies to close out the 2015 calendar year, much as they did following the 2011 World Cup and 2012 Olympics. While the veterans will almost certainly be a part of those friendlies and the corresponding celebration, the more immediate question is, which of them will be stepping down before the 2016 Olympics?

The short gap between the World Cup and the Olympics means that any player—even the most aged—could potentially stay in the fold. However, many of the veterans will likely take Sunday's World Cup win as a chance to go out on top and fade into retirement.

At the top of the list is all-time international goal scorer Abby Wambach, who has stated over and over that a World Cup trophy was the only missing piece of her highly-decorated career.

Speaking prior to Sunday's final against Japan, she reiterated that feeling again.

"I want to be remembered as...a World Cup champion. That is what I want my legacy to be," said Wambach.

With that goal now obtained, it wouldn't be a shock to see Wambach hang up her boots.

She will likely be joined by captain Christie Rampone, who turned 40 two weeks ago. Rampone is still the team's third best center back, but is unlikely to push her way back into the top two and may choose this time to step aside. Ahead of Sunday's World Cup final, Rampone said she still hadn't made up her mind on whether she would stay on board for the 2016 Olympics.

"I still have to think about it," she said. "I know this is my last World Cup. We'll see about the Olympics and see how [the final] pans out."

With the win over Japan, however, Rampone now has the distinction of being the only player from the 1999 squad to still be around to win the trophy in 2015. The temptation to step down with World Cup trophies bookending both sides of her amazing career may be too strong to pass up.

Shannon Boxx, who is 38 years old and was a surprise to even make the roster this time around, will almost certainly be done. In total, Boxx only played 15 minutes in the 2015 tournament.

Lloyd, the hero of Sunday's final, seemed to confirm her intention to stay around for as long as possible.

Speaking after the win against Japan, Lloyd said, "I'll be back to work and back stronger than ever."

However, Heather O'Reilly, who is just 30 years old, might be forced out of the mix. She only played nine minutes in the 2015 World Cup and has rapidly fallen down the depth chart over the past year. The Olympic qualifying roster is also tougher to make as it is limited to only 20 players (and the roster for the actual Olympics is even smaller, limited to 18), unlike the 23-player World Cup roster.

Lori Chalupny, at 31, is the last of the 30-year-olds, but may be able to stick around due to her versatility. Meghan Klingenberg appears to have a hammerlock on the spot at left back, but Chalupny can also be a dominating holding midfielder, a quality that could keep her around the national team for another year.

Another big question facing the U.S. women's team is, who will coach it at the Olympic Games? Whether Jill Ellis remains as head coach actually boils down to two separate questions:

Having won the World Cup, it seems unthinkable that U.S. Soccer would make a change, but it's also no secret that, even with Sunday's win, Ellis is unpopular with many fans and pundits and made some questionable decisions leading up to and during the tournament. To her credit, she got it right when it counted, but there a number of reasons the federation might want to make a change.

During the tournament, there were rumors that she had lost the locker room, and there has always been a feeling that Ellis was chosen because of her connection with the veteran players. With many key veterans likely to move on, the federation may want to make the change now and go in a new direction.

There is also the lingering question about the need for the U.S. women's program to evolve and whether or not Ellis is the right coach to make the needed changes.

But the bigger question may be whether Ellis wants to stay. In 2012, when former head coach Pia Sundhage stepped down, Ellis—then an assistant—didn't want the job.

Ellis said she turned the job down initially because she to spend more time at home, and less time on the road.

"I just needed to be in one place for a while, for my family, and myself. I had been on the road for too many years.”

Now, coming off a world title, Ellis may decide once again to step aside.

The real tactical revelation of the 2015 tournament was the move to a three-player midfield triangle of Morgan Brian, Lauren Holiday, and Carli Lloyd. The introduction of Brian into the starting XI finally made the move work, despite its failures early in the Ellis era when she tried shoehorning Wambach and Rapinoe into the attacking midfield role. With Brian and Holiday holding, Lloyd was finally pushed into a free attacking role—where she shined.

But with Holiday's coming retirement—confirmed Tuesday—that midfield triangle now needs to be reworked.

There are options to replace Holiday, however, starting with Chalupny, who has shown an ability to dominate NWSL games as a holding midfielder. And within the league—and even the college ranks—there are a host of midfield options that could still make a three-player midfield triangle work.
In the wide midfield positions of the 4-2-3-1, the U.S. will still have Tobin Heath and Rapinoe, as well as 2015 World Cup sparkplug Kelley O'Hara. The more pressing problem may be at forward with the cadre of out-of-form strikers. But in that case, a single-striker set may work best.

Alex Morgan, for all her ability to run at defenders and cause problems, scored only one goal in the entire tournament. To be fair, she had three long injury layoffs over the past 18 months, but the U.S. still will need its forward in a 4-2-3-1 to score goals.

Christen Press, who was widely tipped by many to be a breakout star this summer, struggled to make an impact. After starting 11 of the first 12 games of 2015, including the first two games of the World Cup, Press fell to the bench as a substitute and didn't even play in the U.S.'s final two matches. The one advantage for Press is that she has proven she can play on the wing, where she could compete with Heath, Rapinoe, and O'Hara for minutes.

Finally, Sydney Leroux, for all the pre-tournament stories about her playing a World Cup in her native Canada, never got off the mark. After starting the first two games for the U.S., Leroux logged only a single minute the rest of the way—coming on as a 93rd-minute substitute—in the U.S.'s last four games combined. If the U.S. stays in a single-striker set, Leroux would likely be in a direct battle with Morgan for the starts as the U.S.'s lone forward.