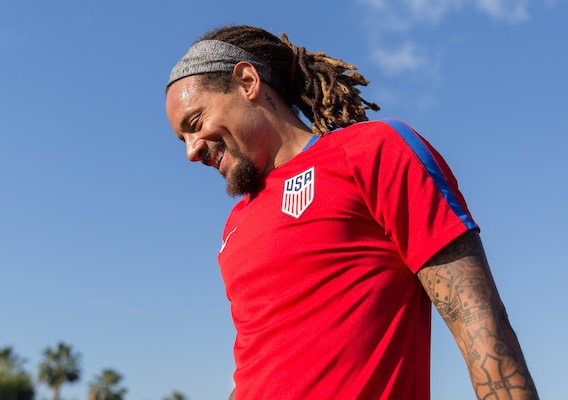 How Will Jermaine Jones Fit in with Galaxy, USMNT?

The 35-year-old midfielder struggled at times in 2016, but both of his new coaches—Curt Onalfo and Bruce Arena—seem to hold Jones in high regard. Here's a look at Jones' prospects for club and country.
BY Doug Sibor Posted
January 25, 2017
1:55 PM

THE U.S. MEN'S NATIONAL TEAM and the Los Angeles Galaxy are both undergoing major changes in 2017—no doubt prompted by disappointing finishes in 2016. Interestingly enough, both teams seem to have arrived at the same conclusion about how best to resolve their respective central midfield issues: Jermaine Jones.

Yes, the same player who prior to the national team's January Camp seemed like a prime candidate to be sent into national team exile has instead emerged as a favorite of Bruce Arena and figures to feature prominently in the team's upcoming friendlies against Serbia and Jamaica. Not only has he re-emerged in the national team picture, but last week Jones—dubbed a "relentless engine" by new Galaxy manager Curt Onalfo—signed with the Los Angeles club and figures to anchor the midfield with fellow newcomer Joao Pedro, holdover Giovani dos Santos, and national team colleagues Gyasi Zardes and Sebastian Lletget.

Clearly, Jones's age and dip in form last year have done little to scare off teams in need of an experienced central midfield destroyer. And to be fair, there are few (if any) American players who can create havoc in the middle of the park quite like the 35-year-old. His penchant for crunching tackles and an unmatched work ethic make Jones an intriguing X-Factor for both of his teams. The question now: How will the U.S. national team and L.A. Galaxy use him?

Jones on the U.S. National Team

Above all else, Bruce Arena is a pragmatist. And considering how abundantly clear the task at hand is— qualify for Russia 2018 or bust—it’s no surprise that in his first January camp the coach has started gravitating toward players who can help the U.S. win now. Based on his comments so far, Arena feels that one of those important players is Jones.

Arena spoke positively of Jones shortly after joining U.S. Soccer, and that opinion has only strengthened since the players convened for January camp. Asked after the team’s first training session last week about who he saw as the primary central midfield pairing, Arena did not hesitate in telling the gathered media that, “the starting point would be Michael Bradley and Jermaine Jones.”

Arena has long shown an affinity for box-to-box destroyers in the middle of the field who can set the tone early on in a match. There’s a reason, after all, that Pablo Mastroeni was always one of the first names on Arena’s team sheet in the 2002 and 2006 World Cups (just ask Andrea Pirlo if he remembers their ’06 encounter). To his credit, even at 35 years of age Jones is still the best player in the American pool for this role; for better or worse, when he is locked in there’s nobody on the field who can top Jones’ intensity. In the best way possible, he truly does not care about what his opponents think of him and will happily let them know.

Witnessing all of this firsthand has clearly left Arena smitten. At a recent training session, he marveled to his assistants: “It's amazing. He's just an animal the way he keeps going and going,” adding, “you know how guys need a couple games and this and that? He needs like halfway through in a practice. It's ridiculous, his engine.”

While the effort is always there, you never know what you’re going to get with Jones. Sometimes you get the hothead who picks up cards needlessly, like when he saw red against Ecuador in the Copa America Centenario quarterfinal. Other times, you get the creative engine who can play inch-perfect passes and score timely goals like his strike against Costa Rica in the U.S.’ deciding group stage match in the Copa. Or, you may recall this one from the 2014 World Cup:

While his performances against Mexico and Costa Rica did not inspire much confidence, Jones seems highly likely to pair with Bradley once again in the center of the park for the U.S. when it takes on Serbia on January 29. Arena has also stated his desire to find a No. 10 to spearhead the U.S. attack, with Sacha Kljestan an in-form and likely candidate to slot into that role. As last season progressed, Arena settled his L.A. Galaxy side into a 4-2-3-1 formation that had them playing their best soccer of the year until injuries forced them into a more conservative approach. In that same spirit, we could see a three-man midfield of Jones, Bradley, and Kljestan deployed in January as a possible preview of the U.S.’s alignment for March’s all-important qualifiers.

Jones on the Galaxy

The Galaxy have had a lot of turnover in the midfield, losing Nigel de Jong in August and then Steven Gerrard and Jeff Larentowicz this winter. Couple that with a new coach in Curt Onalfo, and it figures to be a very different squad this year compared with seasons past.

While Onalfo’s two previous head coaching gigs in Kansas City (27–29–22) and DC (3-12-3) did not quite yield the results one would hope for, the new manager is an Arena disciple who knows the team well. He was an assistant under Arena and the Galaxy II coach since 2011; this high level of familiarity figures to provide tactical continuity from previous seasons.

He won’t be asked to do anything outside of his skillset, and thanks to his strong supporting cast will not need to show much in the way of discipline or restraint. Instead, Jones will be free to do what he does best: support the attack without being the team’s primary playmaker and commit to tackles without fear of leaving his defense exposed.

When Jones was at his best for New England and Colorado, it was filling exactly those roles. In 2014, Jones’ ability to hold the ball up when needed and dominate the middle of the field helped make Lee Nguyen an MVP candidate and propelled the Revolution all the way to the MLS Cup final. Last season in Colorado, Jones was a massive difference-maker when healthy, both going forward and providing defensive coverage for a team that allowed the fewest goals (32) in all of MLS.

Whether in a 4-4-2 or a 4-2-3-1, Jones figures to fill a pivotal box-to-box role for his team behind principal attackers dos Santos, Lletget, and Zardes. The key for Jones, as always, is health. He has yet to play anything remotely resembling a full season in MLS, missing significant time in each of his two full campaigns and topping out at 18 games played in 2015. Jones knows his style of play sometimes puts him in a compromised position.

“It's more injuries where people jump in and you really cannot jump away, and they damage something on your body," he said after signing with Los Angeles. "That's my game. That's why people like to have me in the team. I have to [play my game] and hope that nothing comes this season.”

If Jones can remain healthy, 2017 figures to be a big year in his career despite his advanced age. His central midfield role in the national team, while perhaps on shakier ground than it has been in many years, still appears to be his spot to lose. Likewise, while his new club squad is clearly relying on him, Jones will also be deployed in a position that caters to his strengths and mitigates his weaknesses. An afterthought to many fans and pundits after a lackluster finish to 2016, Jones is still very much a part of the near future of both domestic and international American soccer.

Would you like to see Jones starting for the U.S. national team on Sunday? How about in the March World Cup qualifiers? Share your take in the Comments section below.

When he isn't playing or watching soccer, Doug Sibor enjoys barbecuing, snacking, and exploring all corners of New England. Follow him on Twitter.