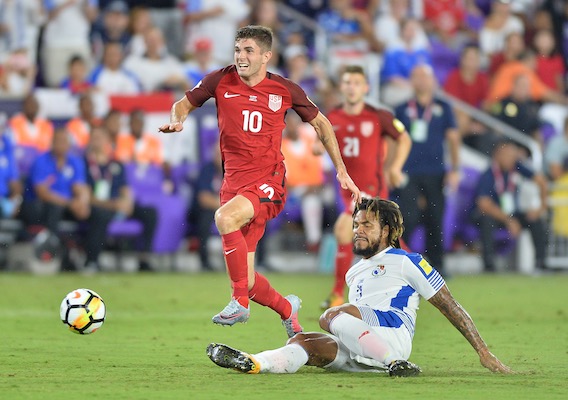 How Does the U.S. National Team Protect Pulisic?

Nineteen-year-old attacker Christian Pulisic dominated the midfield Friday night against Panama, but he took a pounding in the process and was limping visibly after the contest. How will the U.S. handle this?
BY Franco Panizo Posted
October 07, 2017
10:00 AM

ORLANDO, Fla.—U.S. national team fans saw plenty of things to be happy about on Friday. Christian Pulisic walking with a noticeable limp during and after the U.S.’s game was not one of them.

The U.S. moved one giant step closer to Russia 2018 on Friday night by posting a convincing 4-0 victory over Panama in a World Cup Qualifier at Orlando City Stadium. Pulisic, the Americans’ teenage sensation, was one of the stars of the show with the game-winning goal, an assist, and a string of exciting explosive dribbles that left Panamanian defenders on their heels more often than not.

While Pulisic sparkled on the field, his night was cut short early in the second half with the U.S. leading 3-0. Pulisic was on the receiving end of several hard challenges after the intermission as Panama began to play him more physically, and that prompted U.S. head coach Bruce Arena to yank the talented attacker in the 56th minute.

“He’s been getting beat up in these games in CONCACAF, and that’s the way it is,” said Arena. “It doesn’t look like anything is going to change. They took a few shots at him so we thought it was smart to get him off the field.”

If this is going to continue, the U.S. might be wise to bring in an enforcer to help protect Pulisic in upcoming camps. Calling in and deploying a hard-nosed midfielder that can dish out a crunching tackle would obviously change the dynamic of the Americans’ midfield, but it could also prevent opposing teams from trying to bully the 19-year-old star.

“He’s been a little frustrated recently in qualifying. Teams have been playing him really physical,” said midfielder Dax McCarty. “It was ridiculous tonight how many times he was kicked and fouled and not protected by the referee, but he just gets up and keeps going. He was almost unstoppable tonight and when he plays like that, when he’s in that kind of mood, we’re a really dangerous team.

“It’s a delicate balance because you want to protect him, you want to set the tone, but at the same time we knew that Panama, one of their tactics was to try to kick us and have us react and maybe the ref gives us a red card.”

Arena asked aloud who could be that enforcer type when pressed on the issue Friday night. Some observers might point to the aging but still bruising Jermaine Jones, while Perry Kitchen and Wil Trapp are younger players who could also potentially fill the role.

None of those players were called in for this round of decisive World Cup Qualifiers, however, and several of the ones that were summoned by Arena were a caution away from a suspension in next Tuesday’s final match on the road against Trinidad & Tobago.

“Our players can’t take a card,” said Arena. “We have 10 players on yellow cards, and for some reason the referees aren’t giving out yellow cards, too, because they realize players will be suspended the next game. We never know what kind of the mentality the referee is going to be in, what kind of posture we can take, and we have to be smart.

“We can’t lose Michael Bradley for going in and whacking someone to retaliate for Christian. We need him in this next game.”

The U.S. also needs Pulisic, arguably more so than its captain given how dynamic, dangerous, and deadly the youngster is in the final third. If the team keeps allowing Pulisic to take lumps, it is going to risk losing him to injury. He might even be forced to miss Tuesday’s match, as the kicks he took and fouls he suffered against the physical Panamanians left him with a clear limp after the match.

“At times when you can’t stop a guy you’ve got to do everything you can and that’s kind of what you’re seeing [from opposing teams],” said wide midfielder Paul Arriola.

It is not unusual for teams to try and play rough with an opponent’s star attacker, and both Pulisic and the U.S. need to keep getting used to that if he is going to continue to be the Americans’ most lethal weapon in the months and years to come. CONCACAF teams have already decided that the best way to try and limit him is by going at him whenever he has the ball at his feet, and other sides are likely to follow suit, maybe even in the World Cup, in an effort to negate the U.S. catalyst.

That said, Pulisic has proven that he can be effective when teams defend him aggressively. Panama learned that the hard way on Friday.

“That kid killed us,” said Panama head coach Hernan Dario Gomez. “He did whatever he wanted tonight.”