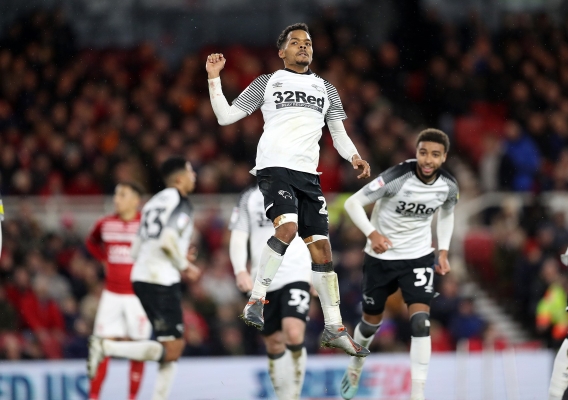 It what seemed like it would be dull weekend in American soccer turned out to be eventful across the globe. Americans scored goals in droves in Europe, and added a nice one in Mexico. A coach got hired in Australia and one of the best young American midfielders in MLS was added to the USMNT. ASN's Brian Sciaretta goes deep and breaks it down.
BY Brian Sciaretta Posted
January 12, 2020
10:00 PM
WHILE IT WASN’T expected to be that busy of a weekend with many leagues still off and several top Americans still injured, it turned into mostly a great weekend full of goals and wins. While many of the goals came in winter-break friendlies, it was still a time that offered promise for the months ahead.


Duane Holmes has played well for nice stretches this season although the goals and assists haven’t been there en masse. But that could change as the team is starting to play well and the arrival of Wayne Rooney should boost the offense, which has struggled at times.

On Saturday, Derby was trailing Middlesbrough away 1-2 in stoppage time and Holmes found the perfect time to get his first goal of the season. It turned out to be a wonder goal off a volley that helped Derby salvage a point.

If Holmes can continue to play well, it should bode well for his chances at returning to the United States national team in March. The camp is in Europe, several players could be away on U-23 duty, and Holmes will be in the middle of his season as opposed to the beginning like other players. So if he’s playing well, he has a good chance.


Borussia Dortmund faced the Eredivisie’s Feyenoord on Saturday in a friendly in Marbella.

Giovanni Reyna, 17, earned the start for Dortmund and played well. In the 44th minute he scored his first goal for the full team to give it a 2-1 lead. The game would end 4-2.

Overall, Reyna had a great winter-break camp for Dortmund and put himself into a great position to earn first team minutes in the second half of the Bundesliga season. The likely bet is that his debut is sooner than later.


Josh Sargent missed the final four weeks of the Bundesliga season before the winter break due to a hamstring injury, but on Saturday he scored two goals in the first half of a 3-1 over Hannover. Sargent only played the first 45 minutes but looked strong throughout.

Sargent is going to be a very interesting player to watch in the coming months because Werder has played very poorly so far this season and its recent four game skid now has it sit in the relegation zone, second from the bottom.

Werder is in a tough spot and Sargent will now play games for the first time in his career where there is a lot at stake. Relegation would be devastating for a big club such as Werder and Sargent is going to have to be a solution to a big problem. This is going to be a very different experience and role for the St. Louis native.


While Werder Bremen’s 3-1 win was great for Sargent, the loss was especially alarming for fellow American forward Sebastian Soto who went 82 minutes in the loss for Hannover.

Hannover manager Kenan Kocak, who was hired in mid-November, was not happy at all with Soto’s performance or effort.

"If Soto plays like he does today, he has no chance,” Koack told the media after the game. “He doesn't work enough against the ball and his aggressiveness is not present."

Soto’s situation has been murky all season. He’s had to deal with an injury but even when he’s been healthy, he hasn’t played. There have been public comments from club officials that Soto does not want to sign an extension with the club and that his contract is set to expire this summer.

Is this outburst related to Soto’s refusal to sign a contract? Is the relationship between Soto and the club fractured? Is Soto playing poorly enough to justify such comments? Is Soto on the verge of signing a precontract with another club that will go into effect this summer?

Soto was not good in the game against Bremen. That is obvious to anyone who watched. It is rare for a coach to express such harsh comments towards a player on one outing. If this was just one poor outing from Soto and he’s been satisfactory most other times, then such an outburst reflects poorly on the club. If Soto has been playing poorly for a long stretch and the coaches have met with him privately before this? Then it reflects poorly on Soto and the club might be justified in trying to send him a wake-up call.

But regardless, Soto should not be thinking about his next club. He’s a young player who hasn’t done anything of substance at the professional level yet. At this stage, he should be giving his best every single game and every single opportunity. He is not beyond a club like Hannover, even if it is struggling. Besides, strong performances only increase a player’s value.

Regardless of whether the player or the club are at fault here, Soto has essentially lost a year of his development – and at 19 years old, is a bad time to lose such a year.


Brandon Servania, 20, was added to the United States national team roster over the weekend. It was a smart move to add one of the more talented players from the 2019 U.S. U-20 World Cup team.

Servania was good at the U-20 World Cup in May and early June but did not play much for Dallas before that tournament. When he returned form Poland, he was a Dallas starter and that’s where he started to take off. In the end, he was critical in getting Dallas and its youthful roster into the playoffs.


MLS 2019 individual player xG +/- per 90 is largely influenced by team, but two outliers caught my eye:

His addition to this team likely means he has a good chance of making the U-23 team for Olympic qualifying in March. That team is short on No. 6 players and Servania could emerge as a very suitable starter.


Sebastian Saucedo, 22, made the move from Real Salt Lake to Pumas in December. He had been with Real Salt Lake since 2014 but spent part of a season on loan to Veracruz in Liga MX in 2016 where he made just four appearances.

Saucedo earned the start for Pumas on Sunday in the Liga MX Clausura opener against Pachuca and scored the opening goal in the 25th minute of a 2-1 win.


U.S U-23 attacker Bofo Saucedo scores in his Pumas debut. A nice goal, similar to many he scored for RSL. His goal opened the scoring vs Pachuca. Game is now over, Pumas won 2-1 pic.twitter.com/cGPvA092BK

It was a very nice goal and it was a move that he used to score many goals for Real Salt Lake – where he cuts in from the wing on the left side, cuts back, and fires a shot to the far post with his right foot. It’s his signature move. MLS defenders eventually adapted, but will the Liga MX defenders do the same? Saucedo brings with him a higher degree of athleticism and he is off to a nice start with his new club.

Saucedo has been part of the U.S. U-23 team in 2019 and his involvement in the Olympic qualifying team will likely come down to whether or not he is released by Pumas to take part.


Lynden Gooch has been on a roll lately and his rise in form is a reason why Sunderland is climbing the League One standings.

In Saturday’s 4-0 win over Wycombe, Gooch assisted on the opening goal. The Santa Cruz, CA native now has three goals and an assist in his last four games. During that stretch, Sunderland has three wins and a draw.

Most importantly, with the win Sunderland climbed into sixth place and the promotional playoff positions.


If you turn your head sideways or turn your computer, you can watch Santa Cruz native Lynden Gooch getting an assist for Sunderland here. He's on fire as of late trying to get his club back into the Championship. Sunderland up 3-0 on Wycombe Wanderers in the first half. https://t.co/e1xcCIO8T3


In a battle of teams who have American players as part of their core, Fulham came away with a big 1-0 win over Hull City on the road. Tim Ream was very strong for Fulham in the win where he anchored the backline. Eric Lichaj, Hull’s captain, was steady in the loss.

But Fulham is once again in a promotional race to get back to the Premier League and Ream is the perfect player in this situation. He’s been part of successful promotional races before he’s excelled in this league before.

With the win, Fulham sit in fourth place and are just a point behind third place Brentford. It should be an exciting few months ahead at Craven Cottage.


Alejandro Bedoya, 32, has been with the Philadelphia Union since 2016 and has been an asset to the club as it has grown into one of the East’s better teams.


But Bedoya’s previous team, Nantes, just gave the former U.S. international a tremendous honor naming him to its team of the decade for his time there from 2013-2016. Bedoya made 87 Ligue 1 appearances for Nantes and scored 11 goals for the club.


American forward/winger Haji Wright has had a frustrating first half of the Eredivisie season where he is without either a goal or an assist in 1147 minutes of action.

On Saturday, the California native scored a late equalizer in a 1-1 friendly draw against Belgium’s Kortrijk. It remains to be seen if it will be enough to give him the momentum he needs to get on the scoresheet in Eredivisie games but Wright does need confidence and this can’t hurt.

After being born in England, Alex Smith moved to Texas before his first birthday and was raised in the Lone Star State. He went to college at Southern Methodist University and had a brief stint with FC Dallas in 2006. About 10 years ago, he moved to Australia and resumed his career there. From 2013-2016 he played for the Wellington Phoenix (the A-League team in New Zealand) before playing and coaching at the lower levels in Australia.

ASN has learned that the former American forward has been named the new Academy coach for Melbourne City of the A-League. Melbourne City is also one of the teams owned by the City Football Group so it will put him under a rather significant umbrella.