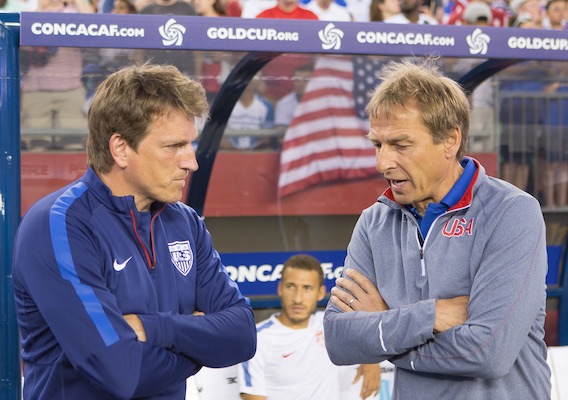 In October the U.S. men's national team will attempt to qualify for the 2016 Olympics in Rio, and today's announcement suggests that federation officials are still looking for the best talent available.
BY Brooke Tunstall Posted
July 28, 2015
8:30 PM

IN A MOVE that shows both a willingness to expand the player pool and an acknowledgment of the reality that some of the top youth national team eligible players in this country still play college soccer, United States U-23 men’s national team head coach Andi Herzog has summoned 28 of the top players from the NCAA ranks for an identification camp next week in Carson, Calif.

This is the first U-23 camp this cycle to feature just college players.

The U.S. U-23 team will begin CONCACAF qualifying for next year’s Olympics this October and while the bulk of the team Herzog uses for that tournament will be established pros, he is looking to the college ranks for some other options, especially since pro clubs are not obligated to release players for a youth national team event and many of the European-based Americans aren’t expected to be available.

If Herzog can find one or two players who at this camp who can help in qualifying, the week will be a success.

Of the 28 players invited, only one—Sam Strong, a red-shirt freshman from U.C. Santa Barbara—has been looked at by Herzog and his U-23 staff this cycle and, according to U.S. Soccer, the majority of the players invited are being looked at by the youth national team system for the first time.

For most of their existence beginning in the early 1980s, the vast majority of American youth national team players at the U-23 and U-20 ranks came from the college ranks. But as more and more American players turn pro either as teens or before playing four years of college soccer, the youth national teams have become mostly professional. For instance, on the U.S. team that competed in last month’s U-20 World Cup, the only current college players on the roster were the team’s two backup goalkeepers.

“It’s very exciting for college soccer," Stanford coach Jeremy Gunn, who had three players picked for the roster, told American Soccer Now. "In a time where there are lots of thoughts on what the best paths are for player development, it’s great to see that this path is available for college players.

“Without trying to win an argument here, I think it’s quite clear there can be many different paths. And in the U.S., especially, there are different paths available for a player to take so it’s a good thing the national teams are recognizing this.”

One college player expected to be on the U.S. qualifying roster is forward Jordan Morris, who will be a junior at Stanford this fall. Morris, who had a goal and an assist for the senior national team this spring in wins over Mexico and the Netherlands, has become the poster boy for college soccer, particularly as it pertains to the national team since he has chosen to stay in school rather than turn pro. However, he will not attend the college identification camp as he recovers from minor knee surgery.

“I can’t speak on behalf of the national staff, but you would think his success would certainly help pave the way for an open mind looking at players, no matter what environment," he said. "But I think coaching staffs always keep an open mind because you want to find the best players, period.”

One of Gunn’s players will likely get some of the closest scrutiny at the camp. That’s Cardinal left back Brandon Vincent, an All-American last season who some MLS scouts have told American Soccer Now might be the first senior to go in this winter’s Major League Soccer draft.

Left back is a major question mark for Herzog as it wasn’t a position of strength on either of the last two U-20 national teams—the players from which make up the current U-23 pool. Vincent and UCLA sophomore Chase Gasper will both have a chance to earn a longer look.

While it’s tough to handicap the rest of the players invited, the U-23 forward pool—aside from Morris—hasn’t been spectacular. This could leave the door open for crafty and productive strikers like Wake Forest senior Michael Gamble and Penn State junior Connor Maloney. In the rough-and-tumble world of CONCACAF qualifying, a big target striker could come in handy, opening the door for Providence’s Mac Steeves, a six-foot-three forward who was outstanding for the Friars in December’s College Cup.

With qualifying looming in just over two months, Herzog appears to be emphasizing older players more likely to step in and help immediately. Of the 28 players invited, 20 will be upperclassmen this fall.

The only true freshman invited has a familiar name.

Meanwhile, Gunn expects Morris to be ready when the Cardinal begin preseason in mid-August. The prodigal Morris was named to the U.S. preliminary 35-man Gold Cup roster in early June but then underwent surgery for a stress fracture in his knee in late June, a procedure that was expected to shelve him for six weeks.

Gunn acknowledged that Morris may have benefitted from the unplanned break.

“I don’t think Jordan, or any player, would look it at that way but he’s had a really busy year. Sometimes your body starts to have a voice in things and maybe his body said it needs a rest. You have physical demands, but the mental demands, too. I’m sure the break not only will fuel him bit get him more excited to get back on field.”