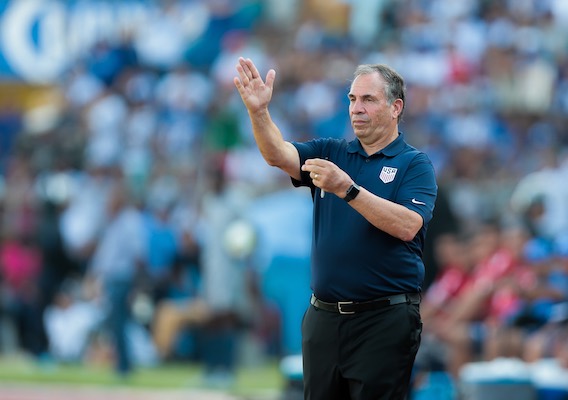 Here's What to Make of the Two September Qualifiers

The U.S. men's national team secured just one point out a possible six during the recent World Cup qualifying window. While disappointing, the team still has time to fix problems before October arrives.
BY Brian Sciaretta Posted
September 06, 2017
7:00 AM

WHILE MOSTLY DISAPPOINTING, it was not an entirely bad performance last night as the U.S fought very hard until the end and secured an away point.

The team is not on life support either. It has a favorable draw in October and, even more importantly, might have a little confidence after ending the Honduras game on a high note.

That doesn’t mean everything is rosy. This team still needs a lot of work—particularly along the backline. Here are some key takeaways from the match.

In Defense of Matt Besler

Matt Besler should leave this camp feeling good about himself. Not many players improved their stock during this window but the Sporting Kansas City veteran performed well and that was quite an accomplishment given how poorly Omar Gonzalez, DaMarcus Beasley, and Graham Zusi played on Tuesday. Four days earlier, against Costa Rica, Tim Ream and Geoff Cameron also struggled badly.

Cameron was much improved against Honduras and perhaps his Costa Rica game was just a blip on the radar. But with John Brooks likely out for the remainder of 2017, Besler should absolutely be the starter for the October qualifiers. As the Premier League season inches toward midseason, Cameron should be in good form come next month. Combine that with DeAndre Yedlin’s pending return, and Arena's backline could be OK.

The big concern, however, is why the U.S. central defenders are not playing up to their capabilities. Ream and Cameron are better than they showed on Friday. Gonzalez, a consistent contributor for Pachuca, is better than what he showed on Tuesday. Some of the mistakes the players made over these two games were inexcusable.

The mobility of Morris

When Bobby Wood and Jozy Altidore struggled on Friday, Arena opted to go with Jordan Morris up top with Clint Dempsey slightly behind him. (Altidore's suspension factored into this as well.) The U.S. attack was starved for service for long stretches but when things started clicking, Morris' speed proved to be a vital asset.

Altidore and Wood are the two top forwards but they did not combine well together in a two-forward set against Costa Rica. Morris might just bring something different to the table with his ability to make dangerous runs that draw defenders.

Acosta remains a work in progress

Though invisible in the first half, Kellyn Acosta stepped it up and made an impact after the break. His late free kick created was first rate, and led directly to Wood's equalizer. So far this year Acosta has been inconsistent for the national team—plenty of highs and lows. But even with the lows, you get the sense that he can be a very effective player at some point down the road.

There are other players in the midfield mix. Bruce Arena has hinted that he wants to look at Danny Williams, and he should. Michael Bradley was not great against Honduras but he still made some important defensive plays and was the best American player against Costa Rica. But even if Williams makes it into the U.S. team, it is well worth keeping Acosta around as opposed to older options like Dax McCarty or even a return of Jermaine Jones.

What will Arena do come October? Beyond selecting the best players, the coach must build an effective unit. Injured players, like Yedlin, should return to the fold and Arena might also opt to call-up options like Matt Miazga or even Sacha Kljestan. But there will not be many surprises.

So without significant changes to the player pool, how does Arena go about getting the most out of his team? He has to examine combinations of players that have played well together and which players bring something to the team that is lacking. A player like Paul Arriola, for example, might not always fit but he does bring speed to the wings and effective defense.

Where does Altidore fit if Wood is the first-choice forward? If those two can’t play well together, how will Altidore react to being a bench player?

Darlington Nagbe clearly has skill on the ball but his defense is not ideal and he has not been part of many dangerous chances. Can Arena find a way to get him more involved or are there other options?

These questions will continue to linger for the remainder of qualifying and perhaps beyond. But based upon what we’ve seen, a lineup like this seems to be the most promising next month.