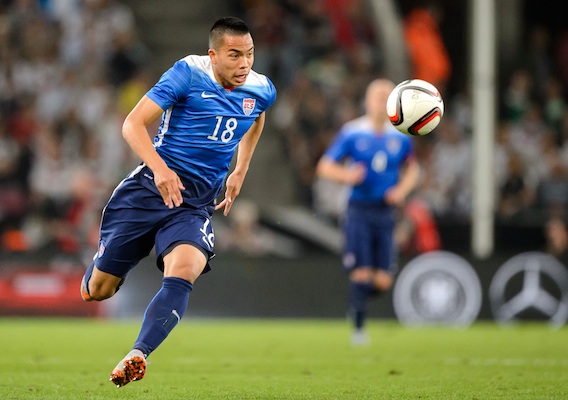 Here's What People Are Saying About Bobby Wood

What started off as a disastrous 2014-15 season for Bobby Wood turned into a triumphant display in recent weeks, so Laura Greene decided to track the chatter about the Hawaii native.
BY Laura Greene Posted
June 11, 2015
11:00 AM

TO SAY THAT BOBBY WOOD has had an eventful season would be something of an understatement.

To suggest that opinions of the 22-year-old striker range wildly from open ridicule to hopeful regard, well, that’s a little closer to the mark.

The Hawaii native recently scored his first goal for the United States men’s national team, a 90th-minute winner in a 4-3 meeting with the Netherlands in Amsterdam.

Not content with providing the decisive goal in the USA’s first-ever victory against the Dutch, Wood followed this up with another late game-winning strike against Germany—giving the U.S. its first scalp against Die Mannschafton German soil.

This all comes less than a fortnight after Wood was relegated from the 2. Bundesliga while on loan with Erzgebirge Aue. Two very different stories; one polarizing and relatively unknown player.

In this edition of On the Record, we take a closer look at the Honolulu-born forward and bring you the lowdown on the ebb and flow of his 2014-15 campaign.

WOOD BEGAN THE SEASON at the Allianz Arena with 1860 Munich, the club he joined as a 14-year-old. Under then-manager Ricardo Moniz, he started Die Lowen’s first four games, registering two assists across two defeats and two draws.

Over the following three fixtures, the out-of-favor Wood would see just 13 minutes of action. Yet things were about to take a turn for the worse.

When Moniz was relieved of his managerial duties on September 24, Markus von Ahlen took the reins at 1860 for the second time in his career.

With two fixtures spent on the bench and just four minutes of play under Von Ahlen, Woods was soon omitted from the first team altogether. Suspended from the senior squad for the following nine games, Wood was sent to train with the reserves, due to an alleged training session bust-up with the German coach.

As reported on abendzeitung-muenchen.de, “Wood had fallen out completely. A clearly audible ‘Kiss my ass' cost the 22-year-old not only his squad place, but his short-term future at 1860. Even sport director Gerhard Poschner could not protect him.”

As the Guardian’s Jack Kerr wrote in a May 12 interview with Wood, “Did he really tell the coach to kiss him where the sun don’t shine, as the Munich press has reported? ‘No, no, no. I did not say that,’ he responds, resolutely. ‘I did not say that.’”

“What did happen, he says, was that he and a group of players stayed out on the training pitch to do some extra work one day. There was six of them out there, ‘but the coach just decided to really yell at me in front of everyone, and in front of the fans, for really no reason.

“‘They made a big deal of it. They told stories that I cussed at the coach, the biggest lies in the world. It’s whatever. That coach got fired. I really don’t care about that. I was laughing when he got fired to be honest. It’s whatever, it happens.’”

Without playing a league game between October 9 and the start of the winter break on December 22, Wood’s punishment turned out to be anything but temporary.

On the international front, however, Wood was getting opportunities with Jurgen Klinsmann’s side.

“I think the first part of 2015 where we have some friendly games leading up, we want to see a couple younger players breaking through or at least making a mark.

“Bobby Wood is on his way, even with his struggles at his club team which is similar to John Brooks a couple of months ago, he’s shown that he can make it.” Klinsmann said on U.S. Soccer’s PR site.

Back in Germany, Wood was on the lookout for a move during the January transfer window.

“Hopefully something will change," he told Goal.com’s Jon Arnold on January 19, when asked if he was looking to leave 1860. "That’s what I’m trying to do right now but we’ll see. It’s hard to say.”

Klinsmann was there to help.

As reported by Freie Presse on January 25, “Today FCE President Helge Leonhardt led a lengthy telephone conversation with former national coach Klinsmann. ‘He would appreciate it if Bobby Wood joins us at Aue. As national coach Klinsmann has naturally a great interest in ensuring that his protégé regularly plays in the second division.”’

“It’s always an awesome feeling when you have someone in your corner, and someone like Jurgen as well. It helped me mentally a lot, it helped me stay positive and that’s what’s pretty much what I’m trying to do. Hopefully things will figure themselves out,” Wood added on Goal.com.

In his second game for the club, against Fortuna Dusseldorf, Wood scored two goals in a 3-2 away win.

As written on Bundesligafanatic.com at the time, “After falling out with Markus von Ahlen, the U.S. international was allowed to join fellow relegation rivals Erzgebirge Aue. In the space of two games, Wood has shown that 1860 Munich made a foolish decision to let him go. After a strong debut against Leipzig, Wood grabbed his first goals for his new side in their remarkable victory over Fortuna Dusseldorf. F95’s defence couldn’t handle the movement and pace of the young striker but he also did a lot of good defensive work for his side.”

One more outing was to follow until injury struck, with Wood going 54 minutes in a 1-0 defeat against SV Darmstadt before suffering a tear to the meniscus and ligaments in his right knee—an area in which he has had recurring problems since 2011.

"Bobby faces an expected eight weeks out. This is obviously not good news for us. But we do not give up hope that the will be available to help us in the final sprint,” Stipic told the club’s official website.

Wood’s recovery time was speedier than first thought and he was back in action after just six games on the treatment table.

The young attacker played a big role for Aue in its final bid to avoid the drop to Germany’s third tier, starting the final six ties of the season. He scored once against Eintracht Braunschweig and bagged an assist against Union Berlin.

In the 2.Bundesliga, Aue pick up a huge away win over Union Berlin. #USMNT fwd Bobby Wood continues to play well - assists on Aue's 1st

Unfortunately for Wood, three wins, one defeat, and two draws were not enough to prevent Aue’s slide and the club was relegated on the final day of the season.

One week later, Klinsmann announced his squad for upcoming U.S. friendlies against the Netherlands and Germany. Woods’ inclusion prompted some choice words.

Bobby Wood was atrocious for a Bundesliga 2 team and now he's playing in the third German league, that's nowhere near good enough

The fact that Bobby Wood is on the #usmnt again is both mind blowing and annoying. Nothing against the kid but he's done NOTHING to earn it.

Can we all agree with Bobby Wood is not good?

Bobby Wood...please do more than absolutely f*** all in a USMNT shirt. Thanks in advance.

But then, THIS happened:

“Bobby Wood the hero as USA fight back to sink sorry Holland,” read a headline in the Guardian.

Only a friendly, but a memorable one. USA beats NED for 1st time ever in crazy 4-3 win in Amsterdam. Bobby Wood & Gyasi Zardes 1st US goals.

MLSSoccer.com’s Matthew Doyle added this: “He was the game-changer, pushing the Netherlands defense back with his speed and aggression in his runs. He will never be a fan favorite because he will never be a clinical finisher, but it's pretty obvious why Klinsmann rates him. Wood made the game better for everybody around him.”

And, as ESPNFC.com’s Jason Davis put it. “Fearless on entering, he created several good opportunities for himself and made himself available with runs off the Dutch back line. In a stunning turn, Wood scored the winner after the game devolved into a bunch of chances toward the final whistle.”

It felt like a turning point for Wood, who was making his second international appearance of 2015.

Am I dreaming or does Bobby Wood look good? This Dutch defense is asleep at the wheel. #USMNT

Thumbs up from Bobby Wood. His game-winning goal was his first for the #USMNT. #USAvNED pic.twitter.com/YeZJZymUGZ

Next up was a meeting with reigning world champions Germany and a momentous week for Wood was about to be capped off in style.

With the score level at 1-1 following Mario Gotze’s opener and Mix Diskerud’s equalizer, late substitute Wood scored the winner in the 87th minute. It was his second international goal and the U.S.’ second win in five days—against none other than the world’s No. 1-ranked side.

GOAL!! Bobby Wood w/a SPECTACULAR turn in the middle of field to beat defender & sink a fantastic strike to put the USA up 2-1! 87' #USAvGER

EASILY the best 2 games back to back of Michael Bradley's career. Bobby Wood should bottle up that turn/touch/hit and REPEAT! #GERvUSA

“It's amazing," Wood told MLS Soccer’s Greg Seltzer after the game. "We don't get these opportunities so often, especially in Germany. Our whole team was excited. Before this game, we said we were going to win it and we did.”

So what’s next for Wood? With a loan spell that expires on July 1, 1860’s interim head coach Torsten Frohling has already told the German press that he would welcome Wood back in Munich.

Considering his recent exploits for the United States, it won’t be long before Wood’s suitors start forming an orderly line.

It has been improbable, it’s been fun, and we can’t wait to see what happens next.