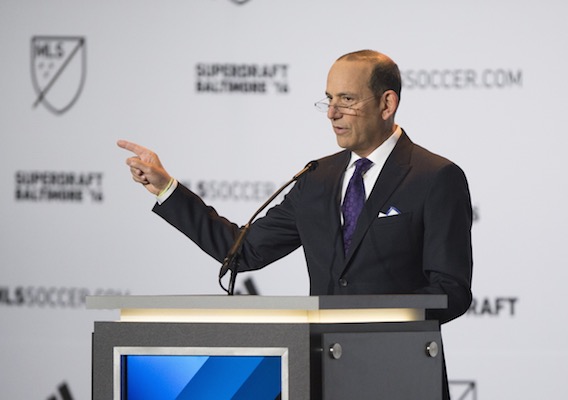 You can read the new MLS collective bargaining agreement in its entirety online, but before you do we recommend this insightful piece by UCLA Law Professor (and ASN contributor) Steven Bank.
BY Steven Bank Posted
February 17, 2016
10:00 AM

For the most part, the agreement is what we expected. It contains a fair amount of the legalese, or “boilerplate,” that is common in such agreements. Of course, that’s not to say that such language is unimportant. For example, as the kerfuffle over the U.S. Women’s National Team Players Union demonstrates, seemingly dry details such as the duration of the agreement and whether it continues on the same terms after the expiration of the original period can matter greatly. The CBA also outlines the single-entity version of free agency agreed to during the negotiations, including its controversial age and service year requirements for determining which players are eligible to become free agents and its restrictive caps on the permissible rise in salaries.

What insights, though, can we glean from the new CBA? It’s always dangerous to read too much into a legal document since some of the provisions may have been inserted by an overly cautious lawyer, rather than by the parties as a result of the negotiations. With that caveat aside, however, there are some aspects of the new CBA that may provide a deeper understanding of the thinking of the parties and the direction the league may be heading. These include the sections dealing with Allocation Money and Options.

At the beginning of each MLS season, teams start with a salary budget, which is effectively the maximum amount the league will pay for the first 20 players on each team’s roster. Under certain circumstances, however, the league allows a team to buy down the salary budget charge of an individual player, effectively raising that team’s salary budget. In theory, that translates into the ability to sign better players so as to allow the team to be more competitive either in MLS play (for an expansion team or a team that failed to make the playoffs the year before) or in outside competitions (such as in the CONCACAF Champions League where MLS teams compete against deeper squads). The league does this by providing teams with what is called “Allocation Money” that it can use to make up the difference between the salary budget charge of the players on the roster and the maximum salary budget permitted (or the maximum amount permitted an individual player before they are subject to the Designated Player rules).

MLS has always been reluctant to publicly reveal the amount of Allocation Money made available to each team because that information might provide ammunition to players and their agents in salary negotiations. So, naturally, most of the attention paid to this section of the CBA thus far has focused on the specified minimum dollar amounts disclosed in the agreement. Perhaps more interesting, however, is the extent to which MLS reserves the right to allot, or strategically invest, the Allocation Money.

For example, MLS has agreed to provide teams with additional Allocation Money in an amount equal to $250,000 times the number of teams that fail to qualify for the MLS playoffs. The implication is that each team that misses the playoffs will receive an additional $250,000 in Allocation Money. That, however, is not required under the CBA:

What does this mean? MLS commits to injecting additional Allocation Money into the system each year, but not necessarily to the weaker teams to help them get better. The Players Union doesn’t really care so long as the salary-bumping effect of an infusion of Allocation Money isn’t diluted by spreading it among too many teams.

Why might MLS want to carve out the right to distribute the money somewhere other than to the weaker teams? There is no similar hedge language for allotments of Allocation Money to participants in non-MLS competitions. It may be that it wants to guard against teams trying to sandbag at the end of the season because of a preference for Allocation Money over a first round playoff exit. It could also be that MLS foresees the possibility that the more ambitious owners will win the battle to move away from a strict emphasis on competitive balance and the league will instead focus its investment in creating super teams that can contend for the CONCACAF Champions League title (if that isn’t happening already). That would convert not making the playoffs into a soft form of promotion/relegation-style financial penalty. In either case, the notion that MLS is inalterably committed to maintaining parity is not exactly enshrined in the CBA.

In many sports, contracts include option years. Sometimes these are mutual. If both parties are happy with their relationship, they can each exercise their respective options to continue the contract for a year at a compensation amount agreed to under the option. Other times, the option is either a team or player option to extend the deal.

One of the unique features of the MLS Standard Player Agreement is that it only contains what are called “unilateral options” and it is exclusively a team (actually MLS) option. A typical player’s contract with such a unilateral option is automatically extended unless the team notifies the player some reasonable time prior to the expiration of the original agreement that it will not be exercising its option.

Unilateral options are quite controversial in the rest of the world. FIFA disfavors them and FIFPro, the umbrella group representing football players associations worldwide, contends that unilateral options are illegal except under special circumstances. According to some rulings in the Court of Arbitration for Sport (“CAS”), they violate the principle of stability of contract, although they were approved in at least one case involving the Greek club Panathinaikos in 2006. At the extreme (where there is no limit on the number of unilateral team option years), they are antithetical to a post-Bosman Europe because they effectively allow a team to hang onto a player without ever letting them reach the open market. The U.S. equivalent would be Major League Baseball’s reserve clause, which Curt Flood attacked before players were eventually granted the right to free agency.

MLS’ use of unilateral options was recently challenged when Camilo Sanvezzo of the Vancouver Whitecaps, who had won the 2013 Golden Boot the previous season, refused to show up to Vancouver for the 2014 season despite the fact that the team held an option on him. He instead showed up in Mexico, having reportedly signed a deal with Queretaro. Rather than risk a fight with FIFA and the CAS, MLS backed off and hastily arranged a face-saving transfer deal with the Mexican club.

If there was ever a time for the Player’s Union to fight back against the inclusion of unilateral options in the Standard Player Agreement, this would have been the time. During a CBA negotiation where free agency was at the heart of the impasse, the Players Union could have argued that such options unfairly tie a player to a team situation that might be less than ideal for them. This might have been a painless way for MLS to remove one of the obstacles to player movement, while still deferring free agency until the player had reached the age and years of service requirements.

Instead, MLS stood its ground on unilateral options. Perhaps the only concession to the Sanvezzo situation is that MLS will now require that players sign a form acknowledging the existence of the specific number of unilateral options in the player’s contract. This is redundant since players already sign their contracts, but it operates like having the players initial a provision in the contract to make sure they really have read it when MLS tries to enforce it.

Why might the Players Union not have fought particularly hard against the unilateral option (although it did secure some modifications to them and protections against their abuse)? One possible reason is that they are mostly problematic for a player like Sanvezzo who has international options. If you are an MLS player who is going to stay in MLS, the unilateral option is mostly symbolic of a greater problem. Until you are eligible for free agency, you can’t choose your team anyway. Thus, for most members of the Players Union, the bigger issue is pay raises under the options, not the options themselves.

If they were mostly a symbolic problem for players, why wouldn’t MLS just get rid of them?

Two reasons: First, in the case of foreign players, they give MLS the upside potential without the downside risk. If the player can’t adapt to the league, then MLS can decline the option. Second, in the case of all players, the unilateral options delay free agency even if a player has become eligible under the age and service requirements. This is just one more way that the free agency the players bargained so hard to achieve is undercut.

Steven Bank is Paul Hastings Professor of Business Law, Lowell Milken Institute for Business Law and Policy, UCLA School of Law. He teaches courses in tax and business entity law, including a soccer law seminar entitled “Law, Lawyering, and the Beautiful Game." Follow him on Twitter.