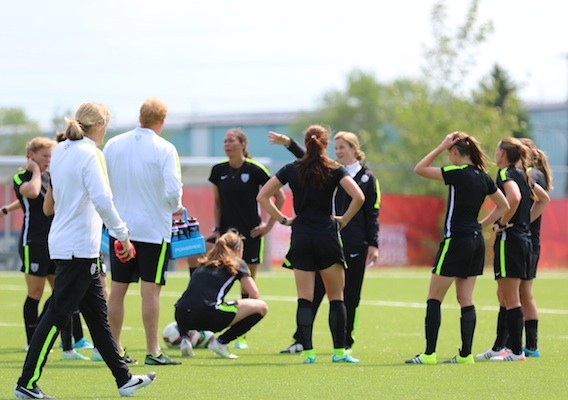 Here's How the U.S. Women Can Defeat the Swedes

AFTER PICKING UP A 3-1 WIN over Australia to open up play in Group D on Monday, the United States women’s national team will now turn its World Cup focus to Sweden (Friday at 8pm ET, Fox).

Here’s everything you need to know about the match, including a preview of the fifth-ranked Swedes, what the U.S. needs to do to secure a win, and the implications of the match for the Americans' World Cup hopes.

In its opener the Swedes tied Nigeria 3-3 in a grueling 90-minute battle. Pia Sundhage's Swedish side pulled ahead on two separate occasions before the Nigerians worked their way back into the match. The good news for the U.S. is that the two teams split the points and seemed to do a good job beating each other up in the process.

Sweden also looked to be physically fatigued in the game, with several players having to stop and stretch their calves—usually a sign of cramping—in the second half.

The most fascinating aspect of a matchup with Sweden, from a U.S. perspective anyway, is the Sundhage component. The 55-year-old coach led the U.S. to Olympic gold in 2008 and 2012, as well as  to the World Cup finals in 2011. While she faced her fair share of criticism as U.S. coach—much like current head coach Jill Ellis does today—Sundhage proved her worth when it counted in big tournaments.

Sundhage was never one to pull punches—even when she coached the U.S.—and even offered some criticism this week in an interview with the New York Times. In it, she questioned American midfielder Carli Lloyd’s mental toughness.

Got a message from Carli Lloyd on SWE coach Pia Sundhage's critical comments on her ahead of USA-Sweden: "I plan to respond on the field."

On the field, the Swedes are led by a cohort of top players running through the spine of team. Starting with Nilla Fischer at center back, running through captain Caroline Seger in the center of the midfield and finishing with Champions League winner Lotta Schelin up front, the Swedes can cause problems for the best of teams.

The last time the U.S. and Sweden met was at the 2014 Algarve Cup. The U.S. lost 1-0 and head coach Tom Sermanni was fired shortly after the tournament.

The U.S. is so talented that it can defeat good teams even when it is not firing on all cylinders—which is what happened against Australia to open group play.

Unfortunately for the U.S., Sweden is a great team, and a mediocre showing likely will result in a loss.

To avoid defeat the U.S. needs to do a better job playing through—and not over—its midfield. Against Australia, the U.S. repeatedly, and aimlessly, smashed the ball forward with little emphasis on possession. The result was an ugly game that the U.S. won only through superior fitness, great goalkeeping, and the offensive stylings of Megan Rapinoe.

Second, the U.S. needs to be more productive up top. Abby Wambach and Sydney Leroux started against the Aussies and both went scoreless. Many blame the U.S.’s more direct play on Wambach herself, who tends to prefer balls played to her head, not her feet. Still, when Wambach did get chances in the area on flighted services (both happened to be on set pieces, not in the run of play), she missed the goal completely.

One option would be to move Christen Press up top, bench Wambach, and slot Tobin Heath in on the wing. Most pundits and fans seemed to agree that Heath looked good in her limited minutes against Australia and Heath does have the type of creative flair the U.S. seemed to be missing against the Matildas. Still, one worry with Heath is her propensity to be a defensive liability, a trait not encouraging considering some of the recent performances of the U.S.’s outside backs.

Other than moving Press up top, head coach Jill Ellis could start Amy Rodriguez or Alex Morgan. Rodriguez has shown flashes over the past six months in limited action, but she has never done quite enough to merit a regular starting spot.

For her part, Morgan is still recovering from a bone bruise suffered back in April and came off the bench late against Australia for her first action in two months.

With the U.S. at the top of Group D entering the match, a poor result against Sweden certainly won’t spell disaster for the U.S.' World Cup hopes. But it will certainly make life more difficult.

The second-place team in Group D could face Brazil in the Round of 16, Japan in the quarterfinals, and host-nation Canada in the semifinals. Finishing first in Group D, however, would put the U.S. in a position to not have to play against another group winner until the semifinals.

That should be the goal, and beating Sweden should be a huge priority.