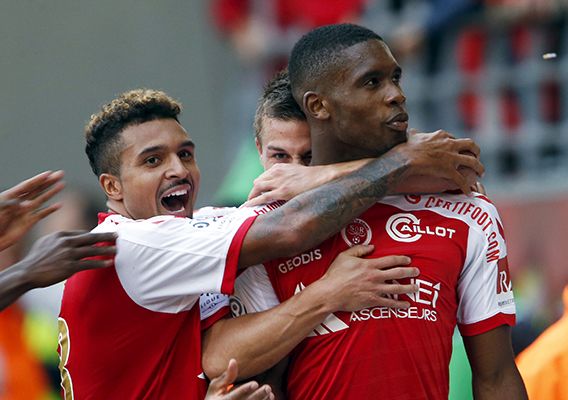 The 19-year-old forward is off to a blistering start for Ligue 1 side Stade de Reims. Also relevant: He was born in Washington D.C. and is a U.S. citizen. Brian Sciaretta has more on the six-foot-three dual-national.
BY Brian Sciaretta Posted
October 19, 2015
8:15 PM

EVERY FEW YEARS, it seems, a soccer player raised abroad makes a name for himself and it is later revealed that he is an American citizen. Some of those finds have become major additions to the U.S. men’s national team, and Theoson Jordan Siebatcheu could be the latest.

Siebatcheu has earned massive accolades after a string of impressive performances to start his professional career at Stade de Reims in Ligue 1.  Born in Washington, D.C., he moved to France at an early age and grew up in the soccer-mad country.

Last year the 19-year-old forward played for the reserve team at Reims, scoring two goals in 12 games. In January, he made one appearance for the first team, playing 23 minutes in a 1-0 loss to Toulouse—his professional debut.

Siebatcheu broke into the first team this season and has scored three goals in nine appearance. The six-foot-three forward is remarkably strong on the ball and has proven to be exceptionally difficult to defend.

Those three goals have come against impressive competition, too. Siebatcheu’s first Ligue 1 goal came Aug. 9 at Bordeaux (at 2:38 mark in video below), where he scored an 87th-minute gamewinner.

On Sept. 12 he scored his second goal for Reims, a 56th-minute strike that ignited a comeback and led to a 2-2 draw at Toulouse (1:58 in video below).

One week later he scored his most memorable goal to date, an 83rd-minute equalizer against French powerhouse Paris Saint-Germain that secured an impressive 1-1 draw (1:55).

Now that Siebatcheu is a bit of a hot commodity, where does all this leave him internationally? The teenager is eligible to play for France, Cameroon, and the United States, but he has yet to represent any of the three—not even at youth levels.

Siebatcheu recently tweeted out his interest in playing for the U.S., though, and Jurgen Klinsmann could use some fresh blood at the forward position. First-choice attackers Jozy Altidore and Clint Dempsey both struggled in the CONCACAF Cup.

After lengthy discussions, Siebatcheu declined an interview with American Soccer Now, citing both that his English was not strong and that his professional career was only 10 games old. But Siebatcheu’s agent, Francis Laurent of the Sports Entertainment Group, confirmed his client’s interest in the U.S. national team.

“He doesn’t want to speak to journalists for now, but sure, he really likes the idea of being called by the USA national team,” Laurent said in a written statement. “He and his family would be very proud of that.”

Undetected by the United States in time for this past summer’s U-20 World Cup (he turned 19 this past April), Siebatcheu would be eligible for the current U.S. U-23 team ahead of its Olympic-qualifying playoff against Colombia in March.

U.S. youth national teams have certainly welcomed dual nationals in the recent past. The last U-20 World Cup team, for example, featured Gedion Zelalem just months after he acquired his American citizenship, and Desevio Payne and Cameron Carter-Vickers also shined in defense after spending little actual time in the country they were representing.

Siebatcheu, however, appears to be on a completely different level with his play. He is not only earning minutes but scoring in one of Europe’s biggest leagues—and against Champions League-quality opponents.

With Klinsmann searching for younger players capable of helping an aging national team, Siebatcheu could very quickly jump to the top of the list.