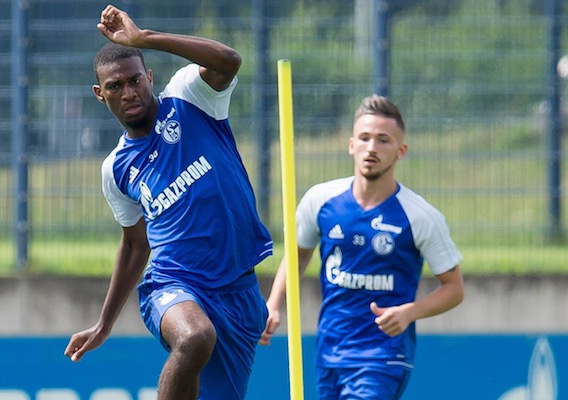 The 19-year-old California native made his professional debut last weekend, coming off the bench to score for Sandhausen shortly after joining the 2.Bundesliga club on a season-long loan deal.
BY Brian Sciaretta Posted
August 28, 2017
8:00 AM

FOR A YOUNG AMERICAN in Europe, a good debut performance can be crucial to establishing confidence and earning the trust of teammates and coaches. For Haji Wright, it is hard to imagine a better European professional debut.

Fresh off securing a season-long loan from Schalke to Sandhausen of the 2.Bundesliga, Wright began his first game on August 19 against Dynamo Dresden on the bench. But Sandhausen coach Kenan Kocak subbed Wright into the game in the 53rd minute, giving the California native his professional debut.

In the 79th minute, Wright opened his account when Teammate Nejmeddin Daghfous stripped the ball from a Dynamo defender in a dangerous position and fed Wright, who was clinical with the ball.

“It's always good to get off to a good start,” Wright told American Soccer Now from Germany. “It's good for the confidence and for the team. Now I can play a little bit more and get into competitive games where it actually counts to help my team. Everything is going well, I am enjoying the move.”

Sandhausen will take all the help it can get. The club has finished in the lower half of the 2.Bundesliga in recent years but is off to a strong start with seven points through its first four games.

Wright, 19, is one of several young American players looking to establish themselves in Germany. Christian Pulisic is already a star at Borussia Dortmund but Weston McKennie and Nick Taitague are with Schalke; Brady Scott is with FC Cologne; and Jonathan Klinsmann is with Hertha Berlin.

Wright acknowledges that his move was made easier since so many young Americans are in same situation. He has played with many of them on U.S. youth national teams going back to the U-14 level.

“We're really close,” Wright said. “We kind of grew up together in residency and through the U.S. youth national teams at the U-14, U-15, and U-16s. We always played together and we know each other very well.”

Wright has helped adjust to life overseas by learning German within his first year of joining Schalke. His dream is to play in the top leagues at a young age and follow in the footsteps of his favorite player, Thierry Henry, and favorite team, Arsenal.

“What drew me to football was how much fun it was and how much fun it was when people scored,” Wright said. “I always wanted to play in Europe with the big stars, in the big leagues, in the stadiums. It's an ambition of mine. In the beginning Germany is a little bit tough for an American because of the language and it’s completely different. But we had family and friends in the area and that definitely helps a young person adapt to the culture and everything.”

Wright performed well in 2016-17, his first year at Schalke. Wright emerged as starter and key player for the club’s U-19 team which advanced to the final of the U-19 Bundesliga. Wright made the bench for the senior team’s season finale. His season-long loan to Sandhausen is designed to get him first-team minutes.

"Haji is on a very good path," Schalke sporting director Christian Heidel said. "What he needs most now is game time in professional football, and he can do that at Sandhausen now.”

And at Sandhausen, he found a very willing taker.

"I am delighted we've signed Haji,” Sandhausen coach Kenan Kocak said. “I am convinced that we can profit from his pace and his good training at Schalke."

Wright agreed the loan was necessary and eventually he hopes it leads him to the full United States national team.

“I talked to the coach and we decided that it would be best if I went on loan to a different team for the season so that I could get more game time,” Wright explained. “It was something I wanted to do. I always wanted to play. If I am going to sit a season on the bench [at Schalke], then I would rather go somewhere else and play there."

“I am only focused on the club part of my game right now,” he said when asked about U.S. national team ambitions. “That is where I am going to be a better player and make my career what it is. But of course I want to play for my country."