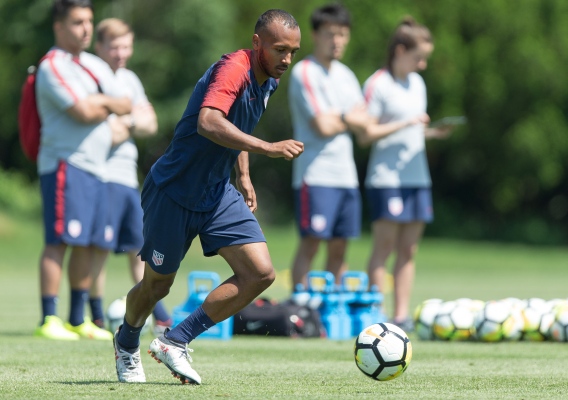 Green and Miazga bringing veteran leadership to a youthful USMNT

Matt Miazga and Julian Green have a lot of similarities and differences in their backgrounds as players. But both are currently with the U.S. team in Philadelphia hoping to build a case to be part of the team's future while serving as experienced veterans - despite their young age.
BY Brian Sciaretta Posted
May 22, 2018
3:00 PM
PHILADELPHIA – When United States national team interim head coach Dave Sarachan announced his roster for Monday’s friendly against Bolivia, the first thing that stood out was youth and inexperience. The average age of the group was 22 and several players had played only handful of professional games, if that.

Two of the more experienced players on the roster, however, are central defender Matt Miazga and forward/winger Julian Green.

The two players have similarities: both are 22 year old dual nationals, both have fewer than 10 national team caps, both have experience of being signed to two of the biggest clubs in the world, and both arrived in camp on the heels of successful conclusions to their respective loans.

Now both are in camp to make a case to be part of both national team’s present and future following the bitter disappointment of a failed World Cup qualifying campaign.

Green in particular is the only player on the team with the experience of having played in a World Cup. Four years ago he came into the team with tremendous publicity and hype after dominating with Bayern Munich’s second team. After a troubled loan to Hamburg, he was sold to Stuttgart where he also found playing time hard to come by.

This past season, however, Green came into his own on loan with Greuther Furth in the 2.Bundesliga. At the start of the 2017/18 season Green had only played 772 minutes of first team minutes in all competitions. But for Greuther Furth, Green played 2049 minutes in 24 appearances.

While he finished the season with a relatively modest three goals and an assist, what’s more important is that he was part of an intense relegation battle and it was his goal the clinched Furth's survial. Entering into the season’s final game it appeared as if Greuther Furth would be relegated to the 3.Liga. But Green's strike from distance in a 1-1 draw against Heidenheim lifted the team out of the relegation zone.

“It made me stronger,” Green added on the importance of playing in a relegation fight. “First of all, I played every game in the league and we [clinched survival] it in the last game. It was very important for me and as a player it gave me a lot. Now I am happy to be here.”

For Miazga, his career has been smoother. After winning the Supporters’ Shield with the New York Red Bulls, he was sold to Chelsea and made two first team appearances. He was then send on two consecutive loans to Vitesse in Holland and in his first season he won the Dutch Cup for Vitesse’s first major trophy in its 126 year history.

Most recently, he completed his second season at Vitesse after helping the club win a playoff for the Eredivisie’s last Europa League berth - which included scoring a goal in the second leg of the final against Utrecht.

Like Green, he is hoping to ride the momentum of a successful end to a loan into a U.S. national team camp where he is one of the more experienced players.

“It did a lot for me in terms of personal growth both on and off the pitch,” Miazga said. “I learned a lot playing consistent football for over two years, playing over 70 games, winning a cup, and winning another prize by helping the club qualify for the Europa league - which is important for Vitesse. So you play a lot of important games, games that mean something. You have to be fully ready to play in games like that. It's great experience. Now I am here with the national team. Hopefully I can translate my form to here.”


Matt Miazga scored for Vitesse today against Utrecht as Vitesse secured a spot in the Europa League! pic.twitter.com/v3lYTaIw8W

In comparison with Green, Miazga’s path into the national team has been far more gradual. After a standout performance at the 2015 U-20 World Cup he made his full national team debut in 2015 in a cap-tying World Cup qualifier. After only sporadic appearances since then, he looks set to cement his place in the team’s backline where he has an established chemistry with teammates Cameron Carter-Vickers and Erik Palmer-Brown dating back to when the three were on the 2015 U-20 World Cup team.

“We've been playing for a quite a bit now for four years,” Mizaga said. “Cameron and I were together for the U-20 World Cup and then with Olympic qualifying. With Erik as well, we've developed a good chemistry. We're all friends and that translates well here at the national team on the pitch.”

“On the international stage, there is not a lot of experience for us in this group,” he added. “We're all hungry and ready for the opportunity ahead. A lot of these guys can establish themselves within the next wave of U.S. national team players - including myself. It's going to be a challenge.”

The future is wide open for both Miazga and Green at both the club and international levels. Miazga will report to Chelsea’s preseason camp in early July but another loan potentially awaits. He remains optimistic regardless of his uncertain status heading into next season saying that so long as he continues to play well, everything else will fall into place.

Green, on the other hand, said nothing is determined yet regarding his future at Stuttgart. Still, there should be plenty of opportunities for him beyond Stuttgart and the upcoming games for the U.S. team offer another chance to showcase himself. This will be his first team back at the international level since 2016 and it will give him the chance to remind everyone why he was once so widely considered to be a big part of the team’s future.

But Green’s history also allows him to identify with many of team’s newcomers like Tim Weah, Josh Sargent, and Keaton Parks who are signed to big European clubs and are adjusting into the full national team at a time when they have very limited or no professional experience.

Sarachan has indicated that he is eager to see which players will step up and provide leadership within this group. As the youngest player on the 2014 U.S. World Cup roster, Green is the only player on the current team from that era. While he is reluctant to give advice, he now speaks in the tone of an experienced veteran who has seen both highs and lows in his still young career.

But looking at his teammates in Philadelphia, he sees a group that is ready and echoes Miazga's eagerness to accept the challenge at the start of this new cycle.

“Normally you go to the national team if you’re a little bit older but I think at this time in soccer, anything is possible if you’re playing well for your club - it doesn’t matter how old you are,” Green explained. “I don’t think it’s tough. I think the most important thing for a young player is to continue the hard work at the club level. That’s the most important thing that you get playing time and then the national team is the special thing to come.”

“It’s always an honor to be here for any player but you can’t give them advice. They’re all really good players and they know how to handle it.”