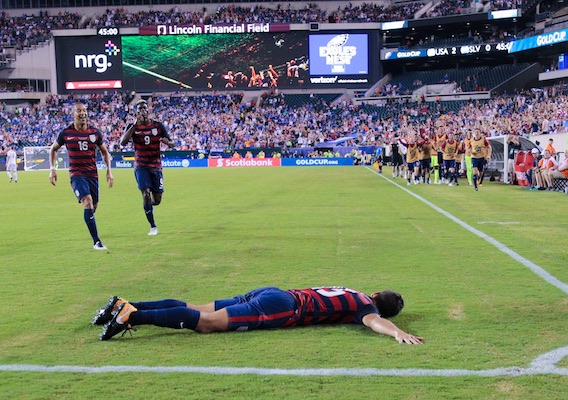 Omar Gonzalez and Eric Lichaj put the U.S. ahead in the first half and Bruce Arena's U.S. men's national team scrapped its way to a 2-0 win over El Salvador in the quarterfinal round of the Gold Cup.
BY Franco Panizo Posted
July 19, 2017
7:50 AM

PHILADELPHIA—U.S. national team head coach Bruce Arena called in some reinforcements to make a serious run at the CONCACAF Gold Cup crown, and they came through to help push the Americans one step closer to that objective.

Late goals from a pair of defenders in the first half were enough for the U.S. to defeat El Salvador, 2-0, in a choppy quarterfinals bout at Lincoln Financial Field on Wednesday night. Omar Gonzalez scored the winner in the 41st minute with a looping header, and Eric Lichaj added the insurance goal in stoppage time.

Both tallies came off of feeds from players that were only recently brought into camp, as Michael Bradley delivered the free kick that Gonzalez nodded home while Clint Dempsey pulled off some of his individual brilliance before teeing up Lichaj.

Michael Jordan with the tennis shoes. @clint_dempsey with the spin moves.pic.twitter.com/3lnTfSSrOv

The victory in front of 31,615 supporters set the Americans up with a semifinals showdown against Costa Rica, which defeated Panama, 1-0, in the day’s first game in Philadelphia. The U.S. will meet Los Ticos on Saturday at AT&T Stadium in Arlington, Texas.

“I thought we had a difficult time tonight,” Arena said after the match. “Our timing wasn’t good. We didn’t deal well with the physicality. The game had no rhythm with all the fouls and [El Salvador] players falling on the ground, but we weren’t good on top of it.

“It took us, really, 30 minutes to play a little bit and then we got a little more assertive in different positions on the field and capitalized on a couple of their mistakes but it was just a sloppy game overall.”

Aside from the goals, the match had another big talking point midway through the second half. While the U.S. prepared to take a corner kick, El Salvador defender Henry Romero both bit Jozy Altidore and pinched the forward on his chest.

The U.S. may have posted its second consecutive shutout in the tournament, but nearly gave up an early opener in the third minute when Lichaj played a poor back-pass that Rodolfo Zelaya pounced on. Thankfully for the Americans, an alert Tim Howard raced off his line to clear the ball from danger with a sliding tackle.

After shaking off the hiccup, the U.S. appeared to have taken the lead in the 17th minute through Gyasi Zardes. His finish from the left was disallowed for offside, however.

Both teams tried to find the breakthrough during the remainder of the back-and-forth opening stanza, but it was the U.S. that struck gold in the 40th minute off a set piece. Bradley whipped in a cross from the left and Gonzalez met it and nicked the ball over Derby Carrillo and into the back of the net.

“I didn’t score for a long time and here’s my second goal in two games,” said Gonzalez, who also scored in a win over Martinique. “My plan is just to keep on being aggressive in the box and see what happens. If I can set picks for my teammates and have them score goals [then I will]. I’m going to do whatever I can so that we can score a goal.”

Gonzalez’s goal pushed the Americans on to a strong finish before halftime. Paul Arriola nearly doubled the U.S.’ lead with a nodded effort of his own before Lichaj opened his international account two minutes into stoppage time.

Lichaj found the insurance goal by slotting a left-footed shot through Carrilo’s legs after Dempsey hit a low diagonal pass into the penalty area.

El Salvador nearly pulled one back in the 52nd minute when Denis Pineda burst forward on the dribble before unleashing a low shot from outside the penalty area that whizzed just wide of the near post.

The U.S. back line had some issues in closing out the match, including on a 63rd-minute header from  Pineda that was sent over the bar, but ultimately held on for the shutout victory that sent the Americans through to the next round.

“We put in a good performance in terms of getting the right result,” said Dempsey. “Now we’re onto the semifinals.”

What did you think of the U.S. performance? Is this team poised to win the tournament? Share your take in the Comments section below.