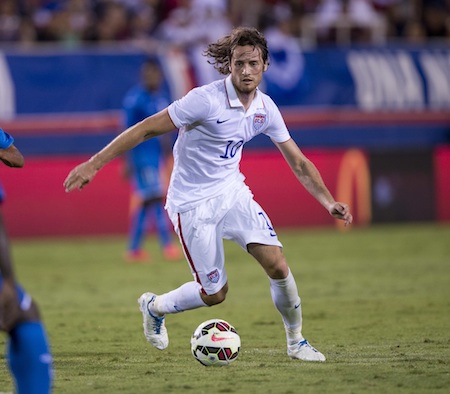 The October camp was about give young players a chance, but did anyone step up? Manager Jurgen Klinsmann liked what he saw out of two young guys he called in and will give additional looks to others from the group.
BY Jon Arnold Posted
October 15, 2014
3:12 AM
BOCA RATON, Fla.—The United States’ two friendlies saw a number of young players get opportunities to impress Jurgen Klinsmann. So, did the next American superstar take the field in 1-1 draws with Ecuador and Honduras?

Bringing flair and flash can grab attention for a player, but rather than attackers showing flair, it was two players’ contributions further back drew praise from Jurgen Klinsmann after Tuesday’s draw.

Mix Diskerud, who played in the previous cycle and made the World Cup roster but didn’t play, and left back Greg Garza got plenty of praise and playing time from the manager.

“Especially with players like these two, we need those games,” Klinsmann said.

He set Diskerud farther back than usual in midfield, with the Rosenborg man playing at the base of a diamond midfield and ended up hoping he would venture forward a little more often with Honduras rarely pushing enough men forward to trouble Diskerud in the open field.

While the manager highlighted this area of improvement for the midfielder, he seemed to thoroughly enjoy Garza’s play.

“Greg Garza looks like he was always with us. I don’t know, I mean, it’s really fun to watch this guy,” Klinsmann said with a guffaw. “He’s playing very focused, defensively strong, when he has a chance to go forward he goes forward. But first and foremost he’s a left back, so he’s a defender, he plays with discipline which we like. I think these games helped us a lot there to see that potential.”

Other players have potential too but didn’t show as much as they, Klinsmann, or U.S. fans would’ve liked. Some of that was that their roles were limited to late cameos and were playing with a host of other young substitutes.

There’s a risk involved when overhauling a team in the second half, as Klinsmann did when he used all six of his substitutes throughout the second half, but the manager said it’s a risk worth taking to see players get 20-25 minutes of time in an international match.

The influx of new players is something fans can get used to seeing as the roster solidifies ahead of the 2015 Gold Cup with the January camp sure to bring even more players who are green on the international level (and perhaps Minnesota United’s Miguel Ibarra. “It might be a good chance for the January camp coming up as well, so we have our eye on him,” Klinsmann said.).

With that many new faces, there are sometimes breakdowns such as the late equalizers in both October matches. “Yeah, I think it’s a little bit of growing pains. It’s going to happen when you involve young kids that haven’t been part of the program,” said Jozy Altidore, a 24-year-old forward with more than 70 caps to his name. “It’s going to take a while. You can’t put too much pressure on these guys. it’s a lot of them. Normally it’s one or two but now we have five, six, seven of them, so it’s tough to get involved.”

Being around older players and getting national team appearances will help “tremendously” according to Tijauan left back Garza. “I think it’s definitely a confidence boost most of all.

“I think just to keep working and working off what this week and a half was, hopefully work off of it with the future with the club and hopefully get some call-ups in the future as well.”

You can be fairly sure the left back will be back in, and so will most of the players getting time. Klinsmann doesn’t have a truly competitive match for another eight months and can take his time as he figures out what the team will look like going forward - and see if the next American superstar is already in his midst.