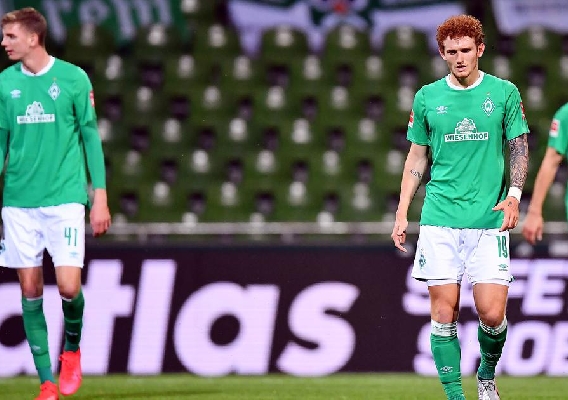 There is more and more soccer to talk about these days - which is good. With that comes several Americans having good weeks - like Jesse Marsch and Erik Palmer Brown. Then there was a setback for Josh Sargent and Werder Bremen.
BY Brian Sciaretta Posted
June 04, 2020
1:25 AM

IT HAD BEEN a slower week for news until yesterday when the MLS Players Association announced it had ratified the new collective bargaining agreement which would pave the way for a summer tournament and possibly the resumption of the 2020 season.

More games also rolled in from abroad with mixed results for Americans. Josh Sargent and Werder Bremen took a step back in their quest for survival. Jesse Marsch and Red Bull Salzburg continued its great week.

The MLS and MLSPA finally broke through their impasse and reached a new CBA that will run through 2025. This was massively important in that it allows the league and its teams to try to move forward and navigate the difficult path of resuming play in 2020. Such a restart will likely begin with a “World Cup style” tournament in Orlando.

Afterward, parties addressed the media and expressed the difficulties of the process.

A more somber league commissioner Don Garber said that the process was very difficult and that owners were slated to lose over $1 billion in revenue due to the COVID-19 shutdown.

Meanwhile, Atlanta United’s Jeff Larentowicz – who sits on the MLSPA board – unloaded on Garber and the negotiations. He said the tactics the league used were “disgusting” and that the league’s attempted used of a force majeure clause to include ties to attendance as “nonsensical.”

But now moving ahead to the tournament in Orlando, Larentowicz said there are still many unanswered questions about protocols and logistics that keep the players safe.

Either way, it appears as if the major roadblock towards hosting this tournament is now over.

Due to the timing of the start of COVID-19 shutdown, Werder Bremen and Eintracht Frankfurt had played one fewer game than the rest of the Bundesliga. The two teams met on Wednesday to make up that game.

Both teams were in the middle of the relegation battle but had been playing better. For Werder Bremen, there was a chance a win could lift it out of the automatic relegation positions and pass Fortuna Dusseldorf.

Josh Sargent was on Werder Bremen’s bench for this game and Timothy Chandler was on the bench for Eintracht Frankfurt.

Sargent came into the game in the 61s minute but Eintracht scored three goals the rest of the way for a 3-0 win. Chandler did not play.

Sargent’s numbers showed a struggle to get on the ball.

Sargent was decent at times and did not make any bad turnovers. But the game was lost because of Werder’s abysmal set piece defending.

How not to defend a corner kick - by Werder Bremen. #SocialDistanacingDefense pic.twitter.com/XM7JMcINBz

The Austrian Bundesliga returned to play this week and leaders Red Bull Salzburg posted a big 2-0 win over Rapid Vienna. Earlier in the day, second place LASK dropped a 2-1 decision to Hartberg. The result of these games now means that Salzburg has a five point lead atop the standings as Wolfsberger overtook LASK for second place.

It caps a great week for Marsch which won the Austrian Cup last Friday and moved into first place in the Austrian Bundesliga when LASK was deducted six points from the Championship table due to illegal training during the COVID-19 shutdown.

With nine games remaining, Salzburg is attempting to win a double – Bundesliga and the Cup. This would cap a remarkable first season for Marsch in charge of Red Bull Salzburg.

Not to get too carried away, but Marsch’s name is surfacing in some impressive job openings right now.

According to SportBILD, Jesse Marsch is one of the names being considered by Borussia Dortmund if they decide to part ways with Lucien Favre this summer #BVBhttps://t.co/BRzSxeyOhC

Of course, a club like Dortmund is going to consider a large number of candidates. This seems unlikely right now after just one season, but if he continues to win he will continue to move up the ladder.

Kansas City native Erik Palmer-Brown was named the Man of the Match by several media publications for his performance on Tuesday in Austria Vienna’s 1-0 win over Admira.

It is the latest step in what has been a very good season for Palmer Brown – who is proving to be very valuable to his club.

This poses the question what happens to him next year. Due to work permit restrictions, he can’t move to England and will likely go out on loan again. Does he remain with Austria Vienna and try to build off this season or does he try to make it to Germany for a likely loan in the 2.Bundesliga?

Up next for Palmer-Brown and Austria Vienna will be St. Poelten on Saturday. St Poelten won 5-0 on Tuesday vs Swarovski Tirol behind a massive effort from Philadelphia Union loanee Cory Burke who had 3 goals and 1 assist in that game. Palmer-Brown will likely be tasked with containing Burke in this one so it will be a big test for the American central defender.