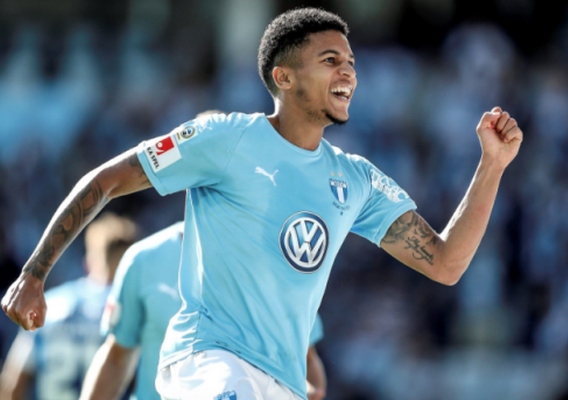 Romain Gall has one of the most interesting background on the USMNT. An immigrant from France, Gall had a difficult start to his career but has blossomed in 2018 at Malmo where he has emerged as a game-changing player.
BY Brian Sciaretta Posted
November 13, 2018
12:00 AM
IT IS TRUE that every player on the latest roster for the United States national team has his unique own story and own path which brought him to this point. For many, they are in the stages of their career and have impressed over the past year. Others, however, are established veterans who are expected to lead the team in the years to come.

Romain Gall, 23, is in his first camp with the national team and his journey to this level has been anything but smooth. Still, he finds himself on the squad after putting up very teriffic numbers in 2018 while playing for Swedish clubs GIF Sundsvall and Malmo FF.

Between both clubs, he made 27 appearances in both the top-tier Allsvenskan and the Swedish Cup. He scored 15 goals and notched seven assists. That production was rewarded by his first call-up to the United States national team.

“It was an amazing feeling,” Gall told ASN of his call-up. “I feel like I worked really hard over a number of years now. To have the call-up after that hard work is a proud moment. It's paying off. It's my first camp. I put pressure on myself but I also want to give my best effort and have a good relationship with the team.”

Getting to this point, however, saw challenges beyond what many on the national team have faced. Despite being a key contributor to the U.S. U-20 team in the 2015 cycle (13 goals in 25 games) including World Cup qualifying, he was cut from the final U-20 World Cup team. In 2016 he was waived by the Columbus Crew after three appearances and a loan stint with the Austin Aztex.

“It was really tough,” Gall recalled. “I don't think people will understand how tough it was unless you're the one experiencing it. The U-20 World Cup was first and that was tough for me because I was part of that team. I felt like I deserved to go. Moving to the third tier of Sweden was really tough because it was such a big downgrade compared to where I was before.”

“But at the same time, I had a mission in my mind and I needed to stay focused in order to accomplish it,” he continued. “I couldn't just dwell on how tough it was or how upsetting it could have been. Those times are really hard and they really test how much you love the game how much you really want it. That was a big factor for me.”

With Nyköpings, Gall performed well and his career finally took a positive turn when he caught the eye of GIF Sundsvall in the top tier Allvenskan – which signed him for the 2017 season. After working his way through injuries at the start of the year, Gall began to emerge as a high-level player in the league.

By 2018 he was scoring goals in droves and moved to Malmoe FF, the reigning Swedish Champions. This past weekend, the Allsvenskan season concluded and Malmo won to qualify for the Europa again next year.

Looking back on the past few years, Gall insists he never doubted his career would eventually take off to the point it has but he is surprised it happened so soon – less than two years from playing in the Swedish third tier. In the coming years, he has ambitions to move to one of the top five leagues in Europe.

“When Malmo came, I thought it was the best option for me to take,” Gall said of the move. “I was familiar with the league and I felt I could keep thriving in that league, with a bigger club. It's tough to come in midseason. They have their way of playing and I had to adapt at a rapid pace. But we had so many games, including Europa games, and the coach tends to rotate the team quite often…We play with 3 central midfielders so I have to adapt to a more central role. So I would say it's a No 8/10. I have freedom to get forward but it's definitely more central. In this system, it's kind of a little different than what I'm used to.”

Now with the U.S. squad, Gall is expected to add some offensive capabilities to the team and can play numerous positions in the attacking midfield. Thus far this season, Gall has not just scored a large number of goals but many have been very impressive in nature – including several from outside the box, with both his left and right feet (he is naturally right footed).

He doesn’t expect any problems integrating into the team since he has played with a large number of the players with youth national teams. But Gall also understands he is arriving at a team in transition and that the upcoming friendlies against England and Italy will likely be the last under interim head coach Dave Sarachan.

“It's a delicate time right now for us right now with the national team - to get the team going and start fresh,” Gall said. “But I think it's also good to get in there and link up with the guys who will be there for the next several years, because it's a young group. The fact there is no permanent head coach right now is too big of a factor at this point. I thin everyone is just trying to get into the system. When the next head coach comes, I think everything will be a little more stable.”

Of course, the running speculation is that the next head coach has a strong possibility of being Gregg Berhalter. It was under Berhalter at Columbus where Gall never caught on and was eventually released. Despite that, Gall is optimistic about potentially working with Berhalter again as he feels as if he is a far improved player than in 2014.

“I think I'll be able to start off with a clean slate. I really like Gregg. I enjoyed my time in Columbus. I have nothing but good things to say about him. Now, also, I am a different player. I have more experience. I think it would be a good fresh start should he become the head coach. He had his style of playing but he's a very calm coach but when he speaks, you know that he knows what he's talking about. The relationship, for me, was good. On the field, I enjoy the way he works. Obviously, he has a very good way of playing. You can see that Columbus is one of the best football playing teams.”

For now, Gall is simply focused on the upcoming games with the U.S. national team and representing his country at the highest level. Playing for the United States holds a special meaning for Gall who was born in Paris but moved to the United States as a child and became an American citizen around the age of 16.

He still has plenty of family in France and often uses his days off at Malmo to visit them. But he identifies strongly with the United States and is looking forward to the huge opportunity over the next week

“I came to the U.S at an early age when I was six or seven so, for me, I feel completely American,” Gall said. “I grew up in the U.S. and my formative years were in the U.S. I feel American and that is where I am at home. So I am very excited to represent the United States. It's a dream come true and I look forward to doing it for a long time, hopefully. That is truly where I feel I belong.”