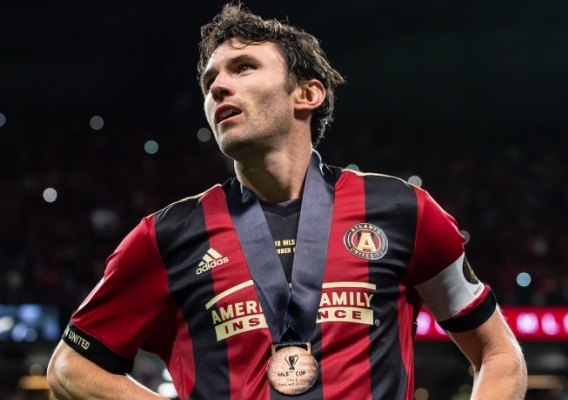 This was not a weekend for the time capsule as the MLS playoff "races" have devolved into a half dozen teams that don't want to step up and win. But that's where we are heading into the stretch. The Red Bulls, Galaxy, and DC United however are exempt from the mess. ASN's Brian Sciaretta looks at it all.
BY Brian Sciaretta Posted
September 23, 2019
7:00 AM
The 29th week of the 2019 MLS Season is over and it wasn’t very good. Unless you were DC United, the New York Red Bulls, the LA Galaxy, or maybe Toronto, it was either a bad weekend, a bad season, or some combination of both.

This was a weekend where there were spectacular disappointments in which some teams were given opportunities and came up woefully short. Then you have Atlanta United, which won, but saw Josef Martinez come up with an injury.

Speaking of that, Martinez is set to miss at least one game but his injury isn’t nearly as bad as feared with no broken bones or damaged ligaments.

It was mostly a weekend of fails. That is the big take away. But here are a few general thoughts.

What does the Chicago Fire do? Play to a scoreless draw. It only had three shots on target (nine were off target), and it seemed to play with no desperation – subbing off Nicolas Gaitan in the 58th minute and CJ Sapong in the 66th minute.

“Tonight, we didn't get the result we wanted,” Chicago head coach Velko Paunovic said afterward. “But I'm proud of the effort and the guys fought like lions. We are still alive. We will keep the tough mentality and compete and we still believe. We still believe an opportunity is there for us. A few of the other results in the League tonight went our way. We will fight until the end."

To be fair to Paunovic, he has to remain upbeat. Chicago can still make the playoffs. It trails New England for the final spot by three points. If the teams are tied, goal differential favors Chicago. Chicago will host Toronto and visit Orlando in its final two games. New England has three games remaining but they’re all challenging: away at Portland, home against New York City, away at Atlanta.

Even if Chicago pulls off the previously unthinkable run to the playoffs, its run will likely be short.

Chicago is mostly about the future right now with its new ownership ready to make big changes. It’s hard to see Nelson Rodriguez stick around but will Paunovic also make the cut? How many player are overhauled? What happens with its academy?


New England has a very hard schedule the rest of the way and its grip on the final playoff spot is razor thin.

So like Chicago, New England rolls a dud in its most winnable game down the stretch in a 0-0 draw against a Real Salt Lake team that played mostly backups.

Like Chicago, it’s a team that is trying to build for the future as Bruce Arena seems to have convinced Robert Kraft to finally spend more money on his team. Arena wasn’t dealt a pretty hand left by Brad Friedel but the team’s execution on Saturday was poor. Arena said before the game that it was a “must win game” and that the team “has to win this game.”

It didn’t but that is probably because he thought there was no way Chicago wouldn’t beat Cincinnati.

It turns out it is a race no one wants to win.


On August 10, Portland started a whopping 10-game homestand where it was thought the team would climb the standings and earn home-field advantage for at least the first or second round of the playoffs.

After Saturday’s 0-0 draw with Minnesota, Portland is nine games through the 10-game stand It was won just four games but two of those were in the first two games. This means it has won just two of its last seven games at home.

Even worse, it has been shutout in three straight games, all at home.

In this game, the problems were obvious. Brian Fernandez and Jeremy Ebobisse simply couldn’t get the job done in front of the goal. These two forwards bear most of the responsibility to finish chances. When they’re contained, Portland is out of options.

The Timbers keep being dealt favorable hands down the stretch and yet it can’t sneak into the playoffs. The team has a favorable schedule the rest of the way too: home vs. New England, away at Sporting Kansas City, and home vs. San Jose. Those are three opponents who are all routinely blowing it down the stretch.


FC Dallas and its young team has had its playoff chances on life support in recent weeks. The team has mixed in efforts that have been either awful, or just barely good enough. The awful was the loss to Chicago. The just good enough was the draw against Seattle or the draw against Montreal (which saw the team rally from an 0-3 deficit and into a 3-3 draw).


Paxton Pomykal, not at 100%, punishes a team for playing poorly out of the back, sets up the goal for Cobra pic.twitter.com/hcukLKnigV

In this game, it was trailing a very good NYCFC team 1-0 in the 66th minute when Paxton Pomykal saved the day for Dallas. His defensive play caught New York City sloppily trying to play out of the back. He forced a strip which Zdenek Ondrasek buried for an equalizer.

In the end, the 1-1 draw turned out to be one of these performances that was just barely good enough. It is in sixth place with 45 points – which is one better than Portland and San Jose. The problem is that Portland and San Jose each have three games remaining while Dallas has just two.

Dallas is aided by the fact Portland and San Jose face each other on Decision Day. Dallas desperately needs a win among its final two games which are tricky but favorable – away at Colorado (which is improving) and home against Sporting Kansas City.

Dallas needs Pomykal to return to full strength and maybe it will have a chance. The combination of Ondrasek and an improving Jesus Ferreira give it a healthy line of attack.


In the bits of positive news this weekend, the New York Red Bulls capped a great week with a 2-0 win over the Philadelphia Union. Combined with a 2-0 away win over Portland, the team not only qualified for its 10th straight playoff appearance, but it is in the hunt to host a game as well.

The big reason for the turnaround has been the improvement of the team’s backline – which always had talent but was underachieving this season. This past week, U.S. U-23 fullback Kyle Duncan raised his game and delivered two fantastic performances that helped provide two wins.

Also, for the Red Bulls, Cristian Casseres has also delivered among two of his best performances of the season to help limit Philadelphia’s chances.

The Red Bulls aren’t playing over their heads at the moment but rather playing to their potential. It bodes well for their chances.

Philadelphia didn’t play poorly but an improved Red Bull team could make noise in the playoffs. It can beat Philadelphia and it can beat New York City. Atlanta, without Josef Martinez, isn’t nearly as powerful – but that remains to be seen.


Despite having a seven-game unbeaten run heading into this weekend, I wasn’t buying Toronto as a playoff threat. It lost the first leg of the Canadian Championship and none of its wins in the league unbeaten run came against playoff bound teams. The best performance was a 1-1 draw against New York City.


There's the opener! Endoh gets #TFCLive on the board first on the road. #LAFCvTOR pic.twitter.com/UQwZpYeenF

Drawing LAFC 1-1 in California is a result that gives more credibility to the unbeaten run. Omar Gonzalez is playing well for Toronto and the team is slowly looking like one of the Easts better teams again. With Chicago and Columbus remaining to finish out the schedule, the team could be coming into the post season with momentum.

Meanwhile, LAFC is clearly off right now despite being assured of winning the Supporters Shield. The once unstoppable force has not won in five games. The smart bet is that Bob Bradley figures it out and adjusts but perhaps complacency has set in after soundly defeating just about everyone.


The middle of the Eastern Conference right now is actually quite good. Along with Toronto FC and the Red Bulls, DC United is playing well again. It is largely due to the familiar faces of Paul Arriola and Wayne Rooney raising their games, DC United look like they’re back on track. The three game winning streak now makes the ugly, self-imploding run, a distant memory.

The 2-0 win over Seattle was convincing – although the Sounders look like a much lower caliber team when Nicolas Lodeiro is out.

What this makes is for a very interesting game this weekend when the Red Bulls host DC United on Sunday. That game will largely determine who hosts a first-round playoff game and it features two rivals both playing well.


One of the classiest players in the history of the league announced he will hang up his cleats at the end of the season. Atlanta’s Michael Parkhurst will retire at the end of the season and he will be remembered as one of the best and smartest defenders in MLS. He is also one of the few American players to compete in the UEFA Champions League when he did so with Nordsjaelland – who he helped win the Danish title after easily converting to right back.

You wonder if coaching is in his future with his ability to read the game.

But his career is eye-opening.