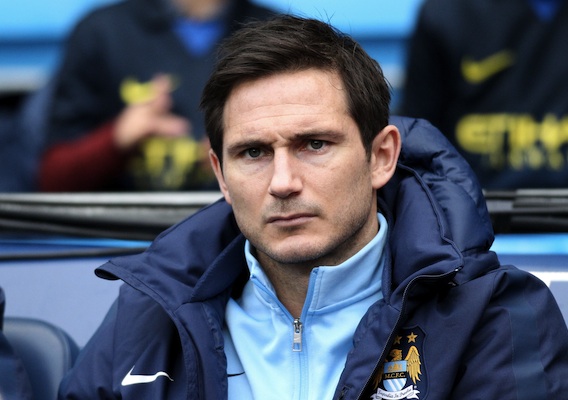 Happy New Year, New York City FC fans! Oh, by the way, remember when we said MLS signed Frank Lampard? We didn't really mean it. But please, come to Yankee Stadium and watch some soccer!
BY Brian Sciaretta Posted
January 01, 2015
10:53 AM
YOU NEVER GET A SECOND CHANCE to make a first impression, and New York City FC seems hell bent on turning off its fans before the MLS season gets underway. In a brief statement issued on a New Year’s Eve afternoon when most people were focused on friends and family, NYCFC and its parent club, Manchester City, announced that Frank Lampard was not going to join New York to open the MLS season and would instead stay at Manchester City through the end of the 2014-15 Premier League season. Lampard, of course, was announced as a new designated player for New York City FC and was only playing with the parent club, Manchester City, through January to stay match fit. The 36-year-old Lampard played so well with Manchester City, however, that management decided to keep him in England.

NYCFC hasn't done itself any favors on the PR front. Stadium search updates have been lacking, the team's jersey looks like identical to Manchester City's, and now the Lampard announcement makes it appear that the New York franchise is little more than an afterthought to Man City's owners. Now it's understandable why a management group would prioritize the Champions League and the Premier League over Major League Soccer—that's not the point. What is neither understandable nor defensible is how MLS commissioner Don Garber could let this situation unfold in this ugly manner.

FWIW, given the Lampard news, NYC should simply discard him & sign someone else. At least, that’s what a self-respecting club would do.

Lampard isn't even under contract to NYCFC at all. Hilarious. pic.twitter.com/E3rbY7C2IZ

So what you're saying, @bbcsport_david (and @GothamistDan), is that @nycfc lied to us all here: http://t.co/XSvqhmPOiO

If this is confirmed, MLS once again has egg on its face. How could Major League Soccer let NYCFC make such claims? Being signed to Manchester City is not the same thing as being signed to NYCFC. The club used Frank Lampard's celebrity, not to mention his face, to help sell season tickets—and he's not even signed to the club? CLICK AND TELL US WHAT YOU THINK OF ALL THIS This is a serious, serious problem but it speaks to a larger issue with the league. Garber was adamant from the start that Manchester City had its own independent vision for New York City FC. That promise has now gone up in spectacular flames. “Uniforms aside, they have a plan that is solely focused on New York City,” said Garber in December’s State of the League address. “Trying to be a competitor with the Red Bulls, building a great stadium, and doing everything they can to be part of the Major League Soccer movement.” Yeah, right. Manchester City has a plan solely focused on New York City so long as it is convenient. New York City FC is its own club minus unique and original jerseys, minus a stadium, and despite the fact that it can lose players to its parent club whenever they decide for nothing or very little in return. It’s nothing new for the biggest clubs in the world to get their way but in normal circumstances the small teams get compensated in the process. Here, NYCFC just gave it all away willingly—due to its inherent nature as a subsidiary. Why would anyone want to be part of this farm team? NYCFC made a smart hire when it signed Jason Kreis as head coach but even he is looking like he is being hung out to dry these days. “We made that a particular area that we wanted to inform leadership about, that we want our full team in place at the start of preseason at the end of January 2015,” Kries said at the press conference unveiling Lampard as a NYCFC player. “For me, players that enter in the middle of the season are typical fails. The chances for those players to really contribute meaningfully in a second half of a season in MLS are very, very small.” Then in September, Kreis adamantly stated that "there is no truth to that rumor at all” regarding Lampard extending his stay in Manchester. Have fun Jason.

What is even more disappointing is that Garber and the league should have learned their lesson with Chivas USA. There were many reasons why that team failed—including a poor product on the field and embarrassingly small crowds—but chief among the reasons is that the original ownership wanted primarily to sell its parent club brand first. Winning titles was secondary. “The smart thing about smart people is that you learn from the mistakes you made and you try to put mechanisms in to prevent that from happening,” Garber said of the NYCFC and Chivas USA comparisons during the State of the League address. “We'd have to be dopey to let the same thing happen again. We went into the discussions with Man City about that.” Garber should be worried right now because NYCFC entered the league with a lot of attention. Thanks to the Lampard fiasco, difficult questions are going to be asked as to whether or not it is healthy to have ownership groups that consider MLS an afterthought. In this case, the owners are hurting NYCFC’s ability to compete in order to serve Manchester City.

NYCFC has so far been used a feeder team, a loophole, a carbon copy and a pawn in the City Empire. The problems of Chivas USA w/ more money.

You can have all the “mechanisms” you want to prevent NYCFC from turning into another Chivas USA but most importantly you have to answer the basic question as to why anyone would want to support NYCFC right now? If you can’t answer that question, no mechanism will save it. It's an incredibly bleak situation. The stadium experience for the foreseeable future will be bad and the field conditions on baseball dirt will also be horrible—perhaps the worst stadium conditions in MLS history. There are public appearances by players and coaches but the grassroots movement is lagging. NYCFC has sold 11,000 season tickets but that is less than other expansion teams that play in smaller markets. But the most important issue is going to be the fan base. It always appeared as if New York City FC was going to be nothing more than a brand identity tool of Man City, and the Lampard announcement just confirms it in spectacular fashion.

Five months of lies, misdirection, and playing fast and loose with the truth. Five. Months.

MLS is not the Premier League in terms of quality but New York is a world-class city and the concept of a minor league team that exists just to extend the brand of a European team just is not going to fly. I am of the belief that MLS can succeed in New York but things have to be done the right way. It is now impossible to think of NYCFC as anything other than a minor league team, and this is only going to turn off both MLS fans and the fans of European teams which the league hopes to convert. Sure, some fans will show up to watch David Villa and Lampard (if/when he gets here) but bonding with the NYCFC crest is now much tougher. Whatever fans NYCFC had before today, each of them must be second-guessing their allegiance to a club whose ownership’s interests are with another club.

If Garber wants MLS to be a world class league in 10 years, all the teams need to be committed to that vision and you have to wonder if NYCFC really is. So why should someone support NYCFC right now? What's going to draw people to this club aside from a player like Villa or a quality coach like Jason Kries? These are hard question to answer right now.

We will accept exchanges or returns on any Lampard #NYCFC jerseys purchased from us. DM or email for details. Happy New Year!

Thoughts? The Comments section is open for business. Brian Sciaretta is an American Soccer Now columnist and an ASN 100 panelist. Follow him on Twitter.