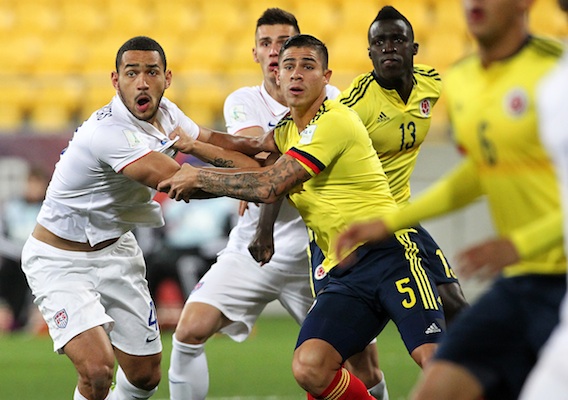 Four Thoughts on the U.S. U-20 World Cup Victory

While you were sleeping the U.S. converted its best scoring chance and got a huge penalty kick save to defeat Colombia and advance to the quarterfinals of the U-20 World Cup. Here is Brian Sciaretta's take.
BY Brian Sciaretta Posted
June 10, 2015
8:15 AM

THE UNITED STATES IS INTO the quarterfinals of the 2015 FIFA U-20 World Cup following a dramatic 1-0 win over Colombia that was more about heart than anything else.

For the most part, Colombia controlled the match and had most of the opportunities as the U.S. struggled to deal with Colombia’s size and athleticism. To make matters worse, forward Bradford Jamieson went down in the fifth minute with a serious injury and Tab Ramos was forced to make an early substitution and play the team in a non-ideal 4-1-4-1 formation that isolated Rubio Rubin up top.

But thanks to a quality strike from Rubin against the run of play and a Zach Steffen penalty following the dismissal of Kellyn Acosta, the U.S. was able to close out the game.

Here are a few thoughts on the match.

When Acosta was sent off for his second yellow card and Colombia was awarded a penalty, it seemed like the beginning of the end for the United States. Colombia had the better of play and with a man advantage, it seemed near-impossible that the U.S. team could prevail.

He had been having a strong game but he made a brilliant save on the ensuing penalty when he dove to his left to deny the strike. That win gave the U.S. team another shot of confidence to play out the final 10 minutes for the win.

If that seems familiar, it’s because it is. Steffen’s penalty save against El Salvador back in January helped the U.S. prevail in a decisive CONCACAF World Cup qualifier to earn a spot in this tournament.

Why was the U.S. able to absorb so much pressure without conceding a goal? Because the backline was absolutely fantastic. Cameron Carter-Vickers and Matt Miazga were nothing short of spectacular in central defense. Time and time again they were able to step up and make crucial interceptions, tackles, and clearances.

Similarly, Desevio Payne has emerged as a force at right back. He was a mystery to most American fans heading into this tournament but he has been absolutely stellar in New Zealand and he was a big reason why Colombia was unsuccessful attacking down that side of the field. Offensively, he was not afraid to get forward and press Colombia’s defense.

The good news for Ramos is that with these three defenders and Steffen in goal, the U.S. team can be outplayed and still win games.

The U.S. struggled mightily to deal with the size, strength, and athleticism of Colombia. In addition, the injury to Jamieson and the previous injury to fellow forward Maki Tall have really limited the team’s ability to win physical battles in attacking situations, not to mention it’s depth at forward. Rubin’s goal was amazing but he was isolated up top for long stretches of the game.

Midfielders Gedion Zelalem and Emerson Hyndman both have a lot of skill, but both turned the ball over more times than they would like and a lot had to do with Colombia’s strength advantage across the lineup.

The question now is where does the U.S. team go from here? Serbia will be similar to Ukraine and Colombia in the athleticism area. The problem is that with the injuries and suspension to Acosta, there are not many options. It is simply going to require the team to take advantage of limited opportunities and be strong on set pieces.

“Sometimes you win games on emotion”

These words were once spoken by Chelsea manager Jose Mourinho and never before were they more applicable than this morning’s game. U.S. fans surely want the team to win and not be outplayed but there is no denying the heart that the team displayed against Colombia. Ramos and the team willed themselves to win.

It was exceptionally difficult for the players to see a popular player like Jamieson go down with a serious injury just minutes into the game – its second injury to a striker in this tournament. There was brilliance from Rubin, the defense, and Steffen but the entire team left it all out on the field.

When the U.S. went down to 10 players, they responded with a fantastic team defensive effort. Paul Arriola made a brilliant goal line clearance just seconds after Steffen’s penalty save. All of the players covered a lot of ground as Colombia stepped up its pressure. When the final whistle blew, there were heavy legs, but the U.S. team booked a date in the quarterfinals Saturday night and its best showing in this event since the 2007 team featuring Michael Bradley and Jozy Altidore also reached the quarterfinals.