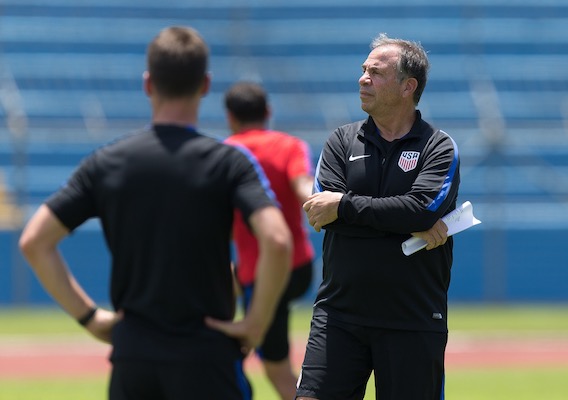 Bruce Arena is preparing for the biggest match of this World Cup cycle, and how he answers the four questions below will likely play a key role in determining whether the U.S. qualifies for Russia.
BY Brian Sciaretta Posted
September 04, 2017
3:55 PM

GIVEN FRIDAY'S LOSS, the U.S. men's national team is now in a three-team race with Honduras and Panama for one outright berth in the World Cup with a second team going to a playoff and the third staying home. Further complicating matters, two of the Yanks three remaining games are on the road.

If you're looking for a silver lining, consider this: the team played hard throughout the 2-0 loss to Costa Rica. No, the Americans didn’t play well but they certainly didn't stop trying. Last November, against the same team, the players gave up on Jurgen Klinsmann and it showed on the field.

Nobody who watched Friday's would suggest that the players lacked for effort and nobody thinks the U.S. will lack a sense of urgency Tuesday in San Pedro Sula, Honduras.

Three key factors contributed to the defeat: 1) very poor central defending; 2) a two-forward setup featuring two players who play a similar style; and 3) substitutions that were made way too late to correct the team’s problems. While the poor central defending issue doesn’t necessarily fall on Bruce Arena (since most would have picked Geoff Cameron and Tim Ream to start), a better gameplan from the coach might have given the U.S. a better chance of winning.

A win in San Pedro Sula puts the U.S. team back into great shape. A loss seriously jeopardizes World Cup qualification. A draw will find the team in murky-but-navigable waters.

Here are four questions Arena must answer—and answer correctly—for the U.S. to come away with a victory.

No matter what setup, there is little chance Ream and Cameron will play central defense in a four-man backline. The normally reliable Cameron had one of the worst performances of his international career and you would never know Ream has been one of Fulham’s best players the past year.

Back in June, Arena unveiled a five-man backline with three central defenders for a big matchup against Mexico at Estadio Azteca. Will he try so again? Maybe. There are huge potential benefits: Central defense would have numbers and the fullbacks would have more freedom to push forward.

The problem, however, is chemistry and that none of the players play a five-man backline with their clubs. In Mexico Arena used Beasley-Ream-Gonzalez-Cameron-Yedlin. On Tuesday he can go with something similar with Eric Lichaj or Graham Zusi replacing the injured Yedlin. He might also opt for Matt Besler to replace Ream or might keep Jorge Villafana in the starting line at left back rather than DaMarcus Beasley.

Either way, the odds of a five-man backline seem better than decent. Central defense has not been great all cycle but having three players at the position might be necessary for a tough road match.

With Jozy Altidore suspended for Tuesday's game, Arena will have to make a change—and that might be for the best. Bobby Wood and Altidore are not ideal partners. Wood typically plays alone up top. Altidore is at his best playing with a fast and explosive partner (Sebastian Giovinco, Charlie Davies, etc).

Assuming Wood starts against Honduras, Arena can either use him alone up top in a 4-2-3-1 (which matches the formation Wood plays at Hamburg) or a 5-4-1. Wood can even play centrally in a 4-3-3.

If Arena wants to use a 4-4-2 formation again, the big decision will be to go with either Clint Dempsey or Jordan Morris. Dempsey has been coming on as a substitute recently but might be the right player for a desperate Hexagonal road match. The other option, Morris, offers speed and mobility up front—something the Yanks lacked on Friday.

3. Who partners with Bradley?

Michael Bradley was the best American player on the field Friday but Costa Rica's counterattack ran rampant at times, begging the question: Would it have helped to have another central midfielder playing alongside the U.S. captain. Would a second defensive midfielder make sense agaisnt Honduras?

It’s a tough decision. Honduras will be a dangerous team at home and Arena’s options aren’t great. Dax McCarty is still untested in major World Cup qualifiers. Kellyn Acosta is a promising talent but he’s had a tough month for FC Dallas dating back to the Gold Cup final.

4. Pulisic on the wing or in the middle?

Christian Pulisic might be the best American player right now but he doesn't have a set position with the national team, having played both centrally and out on the wing. This season at Dortmund he has played on the wing but Pulisic is most dominant in a central position.

Pulisic plays on the wing at Dortmund because that club is filled with world class players who can handle the position. The U.S. national team does not have that sort of talent at its disposal.

If Arena positions Pulisic on the wing opponents will have an easier time neutralizing him—this was the case on Friday night. Pulisic made some dangerous runs but Costa Rica frequently had multiple defenders on him. As a result, Pulisic was rarely able to go 1v1 on a defender. Instead he often had to take on two or three.

Moving him to the middle should increase the number of touches Pulisic receives and it should make him harder to defend. It seems like the right move.

Arena has options to throw at Honduras and it's hard to predict what he will do.

I think a 5-4-1 probably has the best chance of success with Wood alone up top and Pulisic in the middle. The U.S. needed another body in the midfield against Costa Rica and Arena will probably recognize that. Even a 5-3-2 would help if the U.S. wingbacks were successful in helping the team with possession.

If he decides against a five-man backline, Arena could try out something like this:

The problem with this formation, however, is that it would put a ton of pressure on Wood since the midfield lacks goal-scoring options.

It will be interesting to see Arena confronts the limitations of his squad and how it all plays out in tomorrow's massive contest.