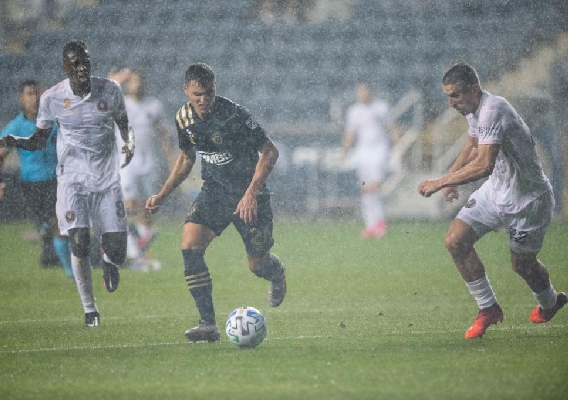 ASN's Brian Sciaretta watched a lot of games this weekend and here are his thoughts on the domestic front - with Philadelphia's youth movement at the top of the list.
BY Brian Sciaretta Posted
September 28, 2020
10:05 PM

THE PAST WEEKEND IN MLS was a fun one for the league but also one that will test the league’s COVID protocols as the Colorado Rapids were forced to postpone games as players and staff tested positive for the virus.

The games on the field were generally pretty good, with Philadelphia-Miami and LAFC- San Jose being the best of the bunch. The standings are generally tough to read at this point because due to COVID, many of the same teams are playing each other repeatedly. Some teams have a much more difficult schedule than others and, whoever wins MLS Cup or the Supporters Shield, will have to deal with the “asterisk” label.

But there are some things that I took away from this weekend’s games and here they are.

This game was entertaining, even if Philadelphia pretty much coasted throughout the game. Philadelphia is a good team this year and it is the best the team has ever looked in its history.

Here’s what I liked about this game:

Antony Fontana is fun to watch. The 20-year-old attacking midfielder now has four goals this season and he scored another banger to open the scoring in the first half. All of his goals have been impressive in quality and he just is not afraid to try to do something special. He’s a very aggressive player. The more he plays, the more he will cool down (because you can’t keep up scoring a goal every 69 minutes), but he has a lot of skill.

Anthony Fontana’s run is pretty impressive. Very limited span but 4 goals in 185 minute is solid. He shouts play a lot once Aaronson is sold. All 4 goals have been bangers too pic.twitter.com/bgRg69Twls

People want MLS to be a selling league, and I very much do too. But it is more than developing and sell. The proper steps are develop-play-win-sell-repeat. The winning and repeating part are the most critical to ensuring sustainability. Winning with youth aids in development keeps the supporters engaged and prepares young players for the pressure of the next level. Making sure you can repeat the process quickly avoids the letdowns and the painful rebuilds that can be a gut-punch to the organization.

Brenden Aaronson is likely gone after this year. Fontana is a different player but one that looks ready to start in the team’s midfield and ensure that there isn’t a huge drop-off. FC Dallas isn’t missing a beat without Cannon as Bryan Reynolds is doing very well at that right back spot. Philadelphia’s pipeline looks well structured at the moment.

Salzburg-bound Brenden Aaronson scores to put the nail in the coffin and & seal Philly’s win. Fun game. Anthony Fontana was a standout but left in the 60th with a knock. Hopefully it’s not serious. Higauin’s miss & ensuing melee will be the highlight pic.twitter.com/S0ywRXI91A

Other homegrowns played well in this one. Aaronson’s final goal sealed the victory and he has the team as a contender heading into the playoffs. Mark McKenzie enjoyed another strong performance in central defense. While not a homegrown, Andre Blake is the best goalkeeper in the league this season.

For Miami, it’s a mess – albeit a fun one. Gonzalo Higuain’s club debut was defined by his missed penalty and his melee with Union players. Blaise Matuidi hasn’t had a great week in the losses to the Red Bulls and now Philadelphia. Designated players without a decent supporting cast leads to expensive disappointments. History in MLS should have taught Miami this (especially David Beckham, who won with the Galaxy because of the designated players and the supporting cast), but it seems like it will continue to be repeated.

Quite the Miami debut for Higuain pic.twitter.com/QGY2AlofjG

Off the field, it was a no-brainer for the Galaxy to sign Chicharito. He was going to sell a lot of tickets, jerseys, and bring in viewers. On the field, it was always going to be puzzling. He is not Zlatan, who could create his own chances from anywhere on the field. Chicharito is a poacher who needs his teammates to create and play him into dangerous areas.

The problem is that when Chicharito is on the field, the Galaxy have to shift approaches and change the way they play. Thus far it hasn’t worked and the Galaxy lost again on Sunday – a 3-1 decision to Seattle. The Galaxy haven’t won in four games and have scored just one goal in that span. Those four games also mark the return of Chicharito from his injury he suffered at MLS Is Back. 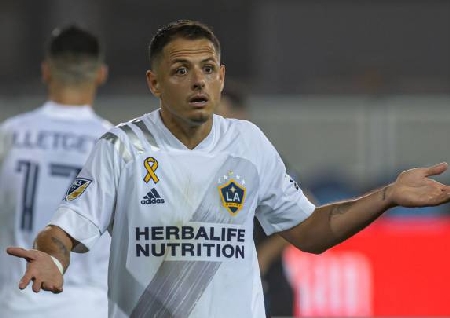 The numbers are eye-opening.

The Galaxy are, of course, going to keep Chicharito around for years. Assuming fans are allowed back next year at full capacity, the Galaxy are going to want to full stadiums across the league and take advantage of his presence. But the team is going to have to rethink and retool its lineup around him if it is going to translate into wins.

Meanwhile, Jordan Morris showed once again that he is playing at a very high level in this league. Over the past five years, it has been tough for Americans to dominate in this league with the caliber of designated players becoming younger and better. The fact that Morris is having this level of impact is significant. A potential sale could happen at some point because Morris has accomplished everything he can in this league and might want to try something else. For now, Seattle remains the likely favorite to win another MLS Cup with him – because he’s been dominant.

JORDAN MORRIS IS SO FAST pic.twitter.com/ovWuvKMzLG

The Western Conference is impossible to predict and almost as hard to break down results. How can a San Jose team which conceded 11 goals over its previous two games (to Colorado and Portland) defeat LAFC in Los Angeles. San Jose almost willed its way to win after falling behind 1-0 and then scoring in the 80th and 90th minutes to win it.

“In the final moments when we just need to be able to defend certain situations better,” LAFC manager Bradley said. “These are bad errors and it's a day where I don’t think we have enough guys that play well. The ability to just finish a game, even if it’s not your best day….We let ourselves down. It’s a bad loss.”

But San Jose made some huge adjustments and was able to contain LAFC’s potent attack. The emotion they displayed in the winning goal from U.S. international Jackson Yueill was heartwarming.

Of course, it is tough to read too much into this one for San Jose. It is up to Almeyda and the club to show this wasn’t a fluke but rather a step in the right direction. We will see if that is the case.

As for LAFC, the team’s defensive struggles have been apparent but it is also affecting the team’s offense that should score goals regularly even without an injured Carlos Vela. Scoring chances are well down and it hasn’t been able to win games whenever it isn’t playing well – something contenders usually find a way to do. Fortunately, this season and in a playoff format, there are always ways for redemption. But it will be a huge challenge for Bob Bradley, even if Carlos Vela returns to 100% for the end of the season.

Just when it appeared as if Columbus was going to cruise to the top playoff position in the East, Caleb Porter’s team drops a 3-1 decision to Toronto. During this game, Toronto looked like a team that shouldn’t be discounted – while also raising some questions about Columbus.

For one, this was the best and most engaged Jozy Altidore has looked all season. That is good news for the U.S. national team – which is still short on proven strikers. With Alejandro Pozuelo (who now has six goals and nine assists in 15 games), the team has a big-time playmaker. But there is a bit more depth for Toronto. Richie Laryea proved this and he was great in this one. But if its not Alitidore, Akinola can also step up.

For Columbus, the team is a little over-reliant on Lucas Zelarayan – who has been a great designated player. The Argentine playmaker is the type of player that can win in this league, but is there enough depth behind him? Columbus was not bad in this one but is there enough depth to win when the best players struggle? Gyasi Zardes was relatively contained and it took a lot out of Columbus.

The New York Red Bulls are playing strong soccer under interim manager Bradley Carnell.  On Sunday, they cruised passed Montreal with a comfortable 4-1 win (despite conceding the opener). Combined with a 4-1 midweek win over Inter Miami, things are finally trending upward for this first time this season. Of course, Miami and Montreal are hardly a tough stretch in the schedule, but the Red Bulls are handling them easily.

Kaku and Daniel Royer are playing like the talented veterans that are capable of winning big games in this league. Kyle Duncan was once again strong and he should be the U.S. U-23 starting right back – assuming a mostly domestic-based squad. Tom Barlow had a pair of goals in this one, and that was a surprise and a lack of top striker options is why the Red Bulls probably will have a tough time through multiple rounds of the playoffs. But the Red Bulls also don’t appear to be as far off as their (justifiably pessimistic) supporters would have you believe.

A great ball from Mandela Egbo sets up Tom Barlow for his first goal of 2020 & we're tied. #RBNYvMTL pic.twitter.com/b5wZkJXkmd

But speaking of the future, the Red Bulls apparently want to sign its top USL product Caden Clark, 17, to a homegrown deal but the outdated MLS rules are preventing that. Clark, from Minnesota, played for the Minnesota Thunder from ages 12-14. He then moved to New Jersey to play for the Red Bulls. As a result of playing for the Thunder, his MLS rights are owned by Minnesota United – despite the fact that Minnesota wasn’t even in the league at the time Clark played for the Thunder.

The league really needs to drop homegrown territory rules. With clubs now having their own academies and some clubs being more successful at it than others, these rules are counterproductive. The teams that do it right, should reap the benefit of having the best players in the country (not just its region) flock to play there. Other teams, need to raise their game to prevent the loss of talent. In this case, Minnesota has done nothing to reap the reward of having anything to do with Clark.

The Colorado Rapids have been playing better as of late with two wins from three games – and mostly on the heels of young U.S. youth internationals like Cole Bassett, Sam Vines, and Jonathan Lewis. But the team has been hit with an outbreak of COVID (both players and staff). It will be a test for the club and the league on its procedures to be able to continue.

Thus far, the league has handled COVID well. The MLS is Back bubble held well and the COVID outbreak with FC Dallas and Nashville were contained. Since play resumed in home markets, incidents have been few and far between. This is the first major test since the Dallas and Nashville outbreaks. It will be telling to see how this is resolved in the coming week or two.