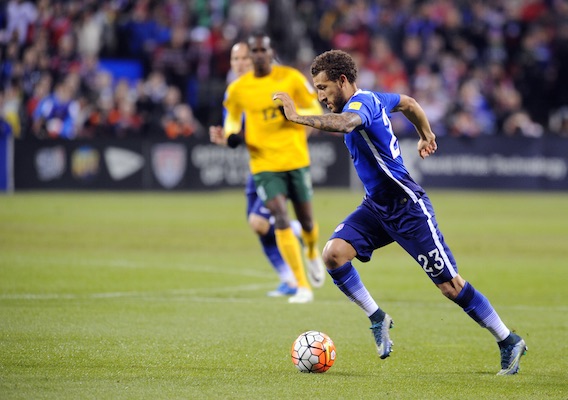 Flexible Fabian Unlikely to Stay at Left Wing for Long

There's a good reason why Fabian Johnson has moved all the way up to the No. 2 slot in the ASN 100—he's an extremely gifted soccer play. He also provides Jurgen Klinsmann with a wealth of options.
BY Noah Davis Posted
November 15, 2015
7:30 AM

ST. LOUIS–For the United States men's national team, Fabian Johnson is an enigma wrapped in a riddle wrapped inside a talent who is perhaps the best American at four separate positions.

"Obviously, Fabian is this kind of a player that when you ask him where he wants to play, he says anywhere: right back, left back, left midfield, right midfield," Jurgen Klinsmann said in a press conference after the U.S. defeated St. Vincent and the Grenadines 6-1 on Friday night.

His impressive flexibility is both a blessing and a curse, a trait that simultaneously opens up options while not presenting an obvious best solution. It's difficult to figure out where to put a puzzle piece that fits in so many spots.

Against the overmatched Caribbean side, the coach deployed his charge in the midfield, in front of left back Tim Ream. The choice was as much about where Johnson plays with his club as it was about what he would do on the field for the U.S.

"Right now, he seems to have his starting sport with Borussia Monchengladbach in the left midfield, so we thought that it might be a good idea to keep that consistency," Klinsmann said. "He has a good run of games right now with his team, so we left it that way."

This makes sense. Bouncing from club to country and back is difficult enough without having to deal with the intricacies of mastering two separate positions. In the past, Johnson has frequently lined up as a wing midfielder with his club and then a fullback for the American squad. Sometimes, this seemed like an unnecessary added degree of difficulty. On Friday, he thrived in the familiar spot.

After the match, however, Klinsmann sounded as though he will reprise the Johnson-at-fullback plan again. And soon. When asked if the game against a weaker team was an opportunity to test out new formations—to see how Johnson at midfield worked—the coach said that it was nice to have the option but that it was more a reaction to St. Vincent's defensive formation.

"We decided to go with DeAndre Yedlin as a right back, a more attacking version because we know that he always wants to go forward. So we had Gyasi [Zardes] and him going forward, which against an opponent like tonight was important because we needed to find a little bit of space coming over the wings."

Against Trinidad and Tobago, however, it's likely that Johnson will return to the fullback spot. He's a more solid defender than Yedlin and the home team presents stiffer opposition. Johnson has moved around before, and he'll move around again, but at some point you start to wonder if the best option would be to put him in a single position and let him develop a comfort level.

One place where Johnson will continue to be valuable no matter where he plays is on set pieces. He delivered the game-winner on Friday evening, and his coach wasn't above ribbing him in the press conference.

"I said to Fabian before the game, 'It would be nice if you put one of your free kicks in the net,' because in training he does four out of five,'" Klinsmann said. "It's time to do it here in a game. It was deflected. We saw that, too, but it's still nice that it's a goal."

The midfielder didn't offer much about his free kick tally.

"I'm happy that it worked out so well," he said. "I'm looking forward to the tournament."

That's Johnson. A man of few words. A master of many positions. An essential piece for the U.S., no matter where he appears on the field.