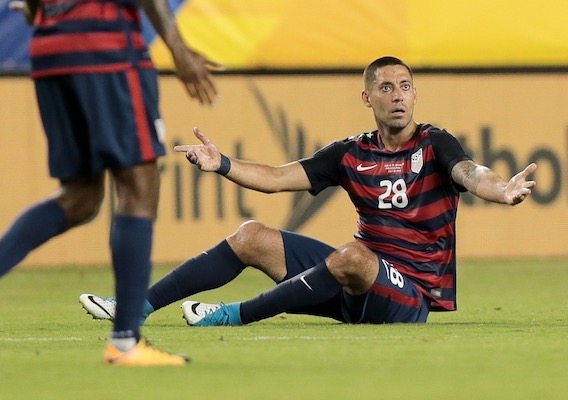 Five Thoughts on the U.S. Victory Against El Salvador

In a game that epitomized much of what ails CONCACAF, Bruce Arena's men fought through provocation and overcame messy play to reach the Gold Cup semifinals. Here are five takeways.
BY Brian Sciaretta Posted
July 20, 2017
2:50 PM

PHILADELPHIA—The United States qualified for the semifinals of the Gold Cup thanks to an ugly but effective 2-0 win over El Salvador last night. It was a mostly dreadful game to watch but it is important to be able to win games like that because that can be the nature of soccer in CONCACAF.

Wednesday night’s game was just as bad on a second viewing. While the U.S. still had more chances than El Salvador, it was alarming how many chances the visitors had and the Yanks have a lot of work to do if they expect to advance to the final.

Winning in CONCACAF is different

As the U.S. continues to improve in future generations under the leadership of players like Christian Pulisic, there will be no escaping the fact that sometimes you can’t win by playing the beautiful game. Sometimes you have to win ugly because CONCACAF opponents will employ shameless tactics that include biting, diving, punching, faking injuries, taunting, and any other dirty kind of soccer these players can muster.

That’s where Arena was smart on Wednesday night against an El Salvador team that was beyond dirty. He opted to go with experienced players who could keep their cool in a game like that and not get frustrated. for a team to push back physically or be unable to concentrate on the game. Players like Michael Bradley, Jozy Altidore, and Omar Gonzalez knew enough to walk away from provocation and focus on the scoreboard. It was a brutal game but the U.S. team was the deserved winner.

No matter how talented future generations of American players are, winning CONCACAF games requires a different kind of mindset and the past few generations have handled it well.

Lichaj must clean up mistakes

Eric Lichaj has a lot to play for in the Gold Cup. The backup right back job is still open and Lichaj is one of the candidates, along with Graham Zusi and Timothy Chandler—who is yet to play for the U.S. under Arena.

Lichaj had his second start of the Gold Cup Wednesday night and it resembled his first. He showed a lot of useful abilities getting forward—he assisted against Martinique and scored against El Salvador—and both of those plays came off of very well-timed runs.

Defensively he is sharp—most of the time. But in each game he was guilty of a major mental error which gifted opponents a very dangerous chance. Better teams would have made him pay.

Lichaj can still overtake both Chandler and Zusi and he also might find a way to get minutes at left back where he occasionally plays for Nottingham Forest. But first he needs to reduce costly errors.

Backline cohesion is a concern

So far at the Gold Cup, Arena has experimented with various combinations along the backline and while several individuals have produced good performances, overall cohesion in the backline has been lacking.

Against El Salvador, Gonzalez and Matt Hedges looked out of synch with each other on a few occasions, which opened up scoring chances for the Central Americans. Against Costa Rica or even Mexico, these types of performances will not be good enough to win. In the 63rd minute Gonzalez appeared to be unsure what to do with a ball entering the box and let it bounce; El Salvador should have scored. In the 50th minute, Justin Morrow misjudged a header and was caught in no-man’s land.

When judging by experience—both in big games as well as recent—it would not be surprising if Arena went with a Villafana-Besler-Gonzalez-Lichaj backline against Costa Rica and possibly Mexico, although Zusi could sneak back in based on having played a lot in 2017.

Bradley and Nagbe were sharp

After the game, Arena noted that it was an ugly contest and that United States did not play well. But then he identified Bradley and Nagbe as two players who stood out.

Arena makes no secret that he rates Nagbe quite highly and the Liberian-born midfielder is going to play a big role for the team en route to Russia. Against El Salvador, Nagbe showed once again that few American players have his touch or are as smooth on the ball as he is. For him it is just about being consistent and playing with fire. When he is on, the U.S. is tough to beat.

As for Bradley, he did his job as the sole defensive midfielder. He covered a lot of ground and was able to distribute well to Nagbe, Paul Arriola, or Gyasi Zardes. It's worth noting, however, that he thrived in a 4-1-3-2 formation against a weaker opponent.

Bradley likes to have a lot of space and freedom on the field. It will be fascinating to see how he does in a formation that gives him a partner in that position—a 4-2-3-1 or something similar. As with Nagbe, when Bradley is at the top of his game—including his incisive set pieces—the Yanks are tough to beat.

In a two-forward set, Jozy Altidore and Clint Dempsey managed to unleash some good shots but could not convert. That does not mean they necessarily had a bad game. Dempsey’s assist to Lichaj was first-rate. Altidore had some nice hold-up play and had to fight through brutal tactics from El Salvador.

But both goals came from defenders in this game and the forwards need to have more chances in the days ahead.

The good news is that most games are likely to have more rhythm than this one. It is hard to imagine the semifinal or even the final having as many fouls or as much time wasting as this game. A free-flowing game is only going to help players like Dempsey and Altidore.