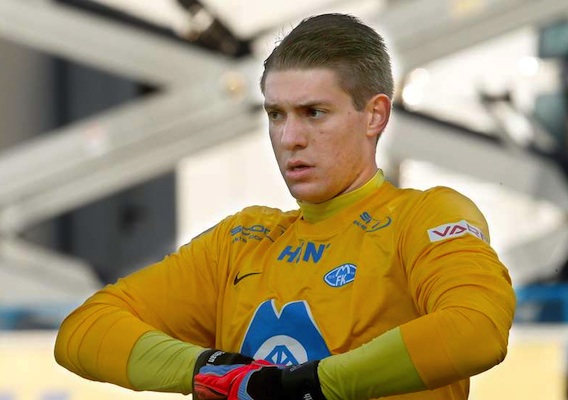 The 20-year-old Molde goalkeeper missed the first two group games but has now joined the U.S. under-23 team as it tries to secure passage to the 2016 Olympics in Rio de Janeiro.
BY Brian Sciaretta Posted
October 05, 2015
5:30 PM

NINETEEN OF THE 20 PLAYERS on the U-23 men’s national team arrived in Denver on Sunday to prepare for Tuesday's third and final group stage game against Panama.

On Monday the final piece of the puzzle joined the squad.

Goalkeeper Ethan Horvath, 20, is coming off an outstanding three months in which he has taken over the top spot for defending Norwegian champions Molde FK and has been playing in important games in the Tippeligaen, Champions League qualifiers, and now Europa League group stage games.

Finally released to play as the FIFA international window opens, Horvath now will join the U-23s in his home state—40 minutes from his hometown of Highlands Ranch—in what will surely be an emotional homecoming. His parents will be on hand at Dick’s Sporting Goods Park for the contest and oh, by the way: He hasn’t seen them in months.

“It’s going to be incredible to see my mom and dad again,” Horvath told American Soccer Now prior to leaving for Colorado. “The last time I saw them was over the summer when they were here in Norway to watch my first Champions League game against Pyunik and a few other games when I started playing. I owe everything to my mom and dad for moving over here.

"Day in and day out, everything is for them.”

Indeed, while then-manager and former Manchester United star Ole Gunnar Solskjær had recruited Horvath to Molde, if not for his parents’ sacrifice in temporarily relocating to Norway, he would not have been able to join the club until he turned 18.

Among all the players on the current U-23 roster, Horvath may well be the playing the best soccer. It's rare for a 20-year-old American goalkeeper to earn a starting job either abroad or in MLS, but Horvath is doing just that at Molde after the sale of Norwegian national team starter Örjan Nyland to Ingolstadt in June.

Since then, the six-foot-four backstop has his team off to a strong start in the group stages of the Europa League, for which it qualified after defeating Belgian side Standard Liege in a playoff.

“At first it was new to me—learning to be the No. 1 on and off the field,” Horvath said, "but I think I’ve done a very good job with it. It's had its ups and downs, but lately I’ve put in a run of good games. It took me a few games to realize, ‘Ethan, you’re the No. 1.’

His first game in the Europa League, though, was eye-opening, as Molde was tasked with traveling to Istanbul to take on Fenerbache, the runner-up in last season’s Turkish Super Lig. Turkish fans are known for their intensity.

Undaunted, Molde secured a 3-1 upset and returned to Norway with three points in hand.

“The tournament has been absolutely amazing,” Horvath said. “The teams are so well known. It was good we went to Fenerbache first to get that, with their fans, out of the way first. That’s a game I’ll never forget. That was my first experience of anything like that. When we first arrived at the stadium, there were already over 1,000 fans waiting there for us. When we came out just to check out the field, they were already booing and whistling. When we came out for warmup, the whole stadium was already filled.

“For 90 minutes, it was so loud I couldn’t hear anything. Just to talk to my defenders and teammates I had to yell as loud as possible. But it’s awesome to experience something like that. It gets your adrenaline rushing. It’s fun.”

As great as the first group stage game was for Molde, the second was even better—at least for Horvath. He made several highlight-reel saves against Ajax to help his team to a 1-1 draw and was named to the Europa League team of the week.

The #USMNT will never struggle for goalkeepers. Ethan Horvath just pulled this stop off against Ajax: https://t.co/OG5WQBgIRU

"Ethan Horvath delivered some class saves," said van der Sar, now a marketing director at Ajax. "He has every reason to be pleased with himself. One can see that he is ambitious and talented. He can use these matches in Europe to make his mark. Matches in the Europa League are also opportunities to show themselves to a larger audience."

Horvath was surprised, and thrilled, to read those comments..

“I did see him after the [Ajax] game, and I introduced myself,” Horvath said. “He was my goalkeeping idol. I saw him play and I decided that I wanted to be a goalkeeper like him. He’s my inspiration. When I first came to Molde, our goalkeeping coach, Richard Hartis, was his goalkeeping coach at Manchester United. We sat down and watched training sessions of van der Sar.

“His words were humbling. I am so grateful for it.”

But whether Horvath can replicate that fantastic form—or even get the chance to try—for the U.S. U-23 team is unclear. During the last U-20 cycle, he was backup to Zack Steffen for nearly every camp. (Horvath was initially named to the U-20 World Cup team but Molde withdrew its release when the sale of Nyland was completed and Horvath was set to become the starter.)

With both available, U.S. head coach Andi Herzog has a difficult decision ahead of him.

Steffen has played well in the first two games of Olympic qualifying and is coming off a great U-20 World Cup, where he demonstrated a strong rapport with the same central defenders, Matt Miazga and Cameron Carter-Vickers, who now start for the U-23s. On the other hand, Horvath is playing terrific soccer at a level that Steffen, who plays for the reserve team of 2.Bundesliga club SC Freiburg, has not come close to reaching.

“For Ethan, the last few weeks were great for him. He now has a huge impact with the defending champions in the Norwegian league. I talked to his goalkeeping coach, and they're really impressed. We have a lot of really good goalkeepers. But for us right now, Zack and Ethan, of course, they are really good.”

Regardless of whether or not he’s the team’s starter, Horvath said he’s just excited to be involved with the U.S. youth national program again. Horvath has suddenly turned into one of the most promising young American players in Europe, and now he returns home to bring that newfound experience and represent his country in its pursuit of a spot in the 2016 Olympics.

“I am completely honored and grateful to get called into this Olympic team,” Horvath said. “I went to the last camp before qualifying in England and I didn’t expect anything out of it for myself personally. I was going to meet the staff and the players and to show Andi Herzog who I was. To get called means a lot. To put on the jersey with the U.S. crest and your name on the back, it means a lot to everybody to qualify your country for such an event.

"Both personally and for the team, it’s important to be part of it because it’s the Olympics. It's such a huge priority."