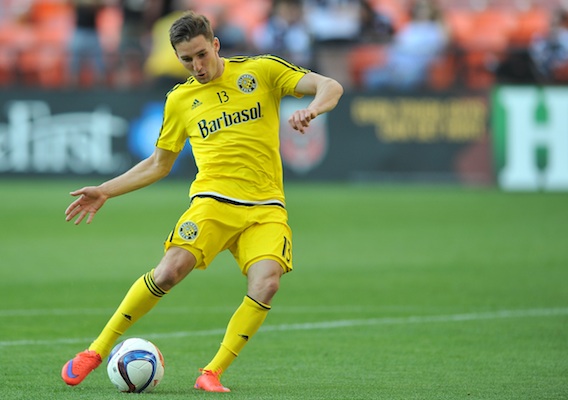 Ethan Finlay: "I Play the Game to Be a Champion"

The 24-year-old winger is enjoying a breakout season with the Columbus Crew, creating goals and playing with the sort of tenacity that could—and perhaps should—lead to a national team call-up.
BY Brian Sciaretta Posted
July 14, 2015
10:30 AM

ETHAN FINLAY REMEMBERS WHEN IT HAPPENED.

The best player on the field that day wasn’t one of the Galaxy’s expensive Designated Players or national team stars—it was the unheralded winger Finlay. He scored his sixth goal in that 4-1 win and would go on to help his team reach the playoffs.

“We came out and outplayed them and I thought I played quite well," the Minnesota-born, Wisconsin-raised Finlay told American Soccer Now. "I felt I was able to run with the big boys who had just come back from the World Cup. It was that moment when I thought that the bar had been set.”

Finlay's evolution from MLS journeyman to first-team regular was not immediate.

After being taken with the 10th overall selection in the 2012 MLS draft, he managed to play just 813 minutes over his first two seasons. It wasn’t until the Crew hired former U.S. national team defender Gregg Berhalter in 2014 that the 24-year-old finally had a coach who believed in him.

That faith is being rewarded, as Finlay is having a Best XI-caliber season in 2015. He is the MLS leader in assists with 10 and also has five goals—including three goals in his last two games. The Crew has scored 27 goals this season, second best in the league, and Finlay has been involved with 55% of the tallies.

Despite that offensive production, Columbus has not separated itself from the crowded pack in the Eastern Conferences and it has conceded a third-worst 29 goals this season. Finlay is adamant the team can contend but it has to eliminate defensive mistakes.

“I think after coming off a really good season, the most important thing was to continue to work on that success—not only on the numbers side, but playing together as a team,” Finlay said. “We have to cut out some of the mistakes. With defense it’s not just the back four—it is all 11 of us."

“I told my parents, 'We’re in a hot bed of soccer and you’re moving me to central Wisconsin! There’s no soccer there. All they have is ice,’” Finlay recalled with a laugh. “I told my Dad he killed my career.”

Fortunately for Finlay, he was wrong. He flourished in the Badger State. His father, Brett Finlay, a Vancouver native, recalls seeing his son’s drive to succeed through any conditions.

“He's been tenacious from the start,” the elder Finlay said. "When he was four, and I got home from work, he would line up balls to play with and I could barely take my coat off. I had to go right from the car to play with him. From then, I just knew he is competitive.

"Then, on a winter vacation in northern Wisconsin when he was 12, it was 13 below zero and he dragged me out to the chamber of commerce parking lot to dribble the ball until it was frozen. He has that drive and he's always carried that all the way through.”

In high school Ethan scored 98 goals and registered 59 assists—earning all-state honors while also playing a starring role for his club team, FC Milwaukee. It was during these years that he realized he had a future in the sport but he also wanted to earn a college scholarship. Creighton University offered him one, and Finlay helped lead the Bluejays to the Final Four in 2011 and was a Hermann Trophy finalist.

“I had the pleasure to coach Ethan in his senior year,” Creighton coach Elmar Bolowich said. “He was a team leader on and off the field, scored 16 goals that year. He always tries to perfect his game and is the consummate team player. His quickness and speed are certainly physical assets but nothing matches his competitiveness and work ethic.

"I am very happy for him to have such a fantastic season thus far and I am not surprised that he possesses the mental toughness to be successful in such a tough league.”

Now that he is enjoying some success in the professional ranks, Finlay believes he is closing in on the goals he set for himself as a youngster who idolized Manchester United's Wayne Rooney.

“To play international soccer, whether on the national team or abroad in Europe, were always my aspirations at the time,” Finlay said. “I knew it was going to be a long, hard road but I always had people there to support me. I still think we’re on a path to that goal.”

Finlay has never represented the United States at any level and he was not named to the preliminary 35-player roster for the Gold Cup.

While some have speculated that Finlay could be eligible for a Canadian passport through his father and therefore a candidate for the Canadian national team, Canadian laws actually render Finlay ineligible due to his life-long residence in the United States.

"There are a bunch of guidelines and it doesn't look like he is going to be able to pass all those litmus tests,” Brett Finlay said of his son’s potential international future. “There was some initial interest from Canada. But not growing up in Canada, he just doesn't feel like there would be an affinity. So why go through a process?

"He doesn't want to use it as some sort of leveraging point. He's very committed to the U.S team.”

While Ethan confirms that he has heard from Canada’s federation—but has yet to hear from U.S. Soccer—he says his allegiances lie with the Stars & Stripes.

“At this point I only have an American passport and I haven’t filed for anything else,” Finlay said. “That’s my stance and that should kind of speak for itself. My goal growing up was always to play for the United States. I don’t think that’s changed.

"Not getting called into the Gold Cup—some people could ask if that is going to deter me from it. But no, it doesn’t. That’s life. My play in MLS will speak for itself.

For now, Finlay is enjoying life both on and off the field—and focusing on what he can control. When he's not enjoying outdoor sports or reading, you might find him using his finance degree to manage his stock portfolio.

But you won't find him obsessing over personal accolades.

"I play the game to be a champion.”