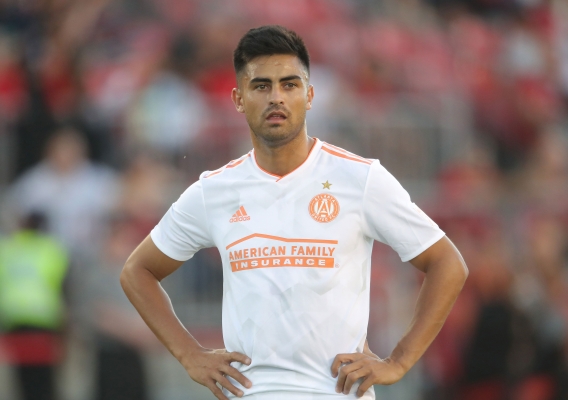 The Eastern Conference is completely up for grabs and no one seems to want it, except for NYCFC and New England. Then out west, Portland and San Jose might be teams that can stop LAFC. ASN's Brian Sciaretta chimes in
BY Brian Sciaretta Posted
July 29, 2019
8:00 AM
IF WEEK 21 taught us anything, it is that no one wants to win the Eastern Conference this year. Anytime a team has looked somewhat promising, the carpet gets yanked out from below them and they tumble down the standings.

This weekend saw Philadelphia, Atlanta, and most of all the Red Bulls fall flat. DC United looks uninspired. Right now, the teams playing the best in the conference are the stadium misfit duo of New York City FC and the New England Revolution.

The West is simply the better place right now and full of more consistently strong teams. Portland, LAFC, Seattle, San Jose are all teams that are a cut above the East and have been for most of the season.

Here are few things that stood out to me.

Red Bulls backline is in tatters


The Red Bulls have no business losing to Columbus at home. It what should have been a golden opportunity to take three points and push towards the top of the standings, the Red Bulls conceded a late goal to fall 3-2.

For Red Bull fans, this loss is unacceptable and inexcusable. There is plenty of blame to go around too. For one, Columbus had a field day against New York’s backline by playing basic “route one” soccer with long balls up the middle finding a target striker in Zardes – who has able to lay balls off to wingers or midfielders making runs.

The Red Bulls backline features Kamar Lawrence, Aaron Long, Tim Parker, and Michael Murillo. These are very experienced players who are often among the best in MLS at their positions. The Red Bulls organization has been slow to acquire new players and instead has relied heavily on developing players within. That is fine, but the backline has to be the strength that allows the coaching staff to be patient.

The Red Bulls are playing bad soccer right now. In Week 20, the team defeated Orlando out of sheer luck after being outplayed for the entire second half. The backline is being paid like stars, and those four should be the star as a collective unit. Of course, it would be nice to see the Red Bull organization get help from its Austrian superiors as its budget is paltry compared with the teams it is competing against. The New York team has been great in helping the Red Bull soccer empire. It supplied Leipzig with is star-in-the-making defensive midfielder and Salzburg with its new head coach.

That being said, one bright spot for the Red Bulls has been forward Brian White who is in superb form this season with eight goals in 1105 minutes. If he gets into double digits this season nears the teens, he might just become a January camp candidate.


Jozy Altidore has now scored in four straight games after finding the back of the net on Saturday for Toronto in a 2-1 win over Cincinnati. But it is not just the number of goals he is scoring but rather the quality of his goals. He’s hitting them from distance, off a free kick, in the air, or from making great runs.

If Altidore can continue to stay healthy, Toronto can still be a threat because along with Pozuelo, the team has difference makers who can win these games in a bad conference.


Jozy Altidore has scored in 4 straight games for #TFCLive.

For the national team, Altidore just needs stay healthy. He’s missed a lot of big tournaments over the years – and even those he’s been able to play, he had only recently recovered from an injury. It has been a long time when Altidore has been in good shape for the national team with months of preparation leading up to a tournament.


The Revolution has been in top form since Bruce Arena took the reigns and has not lost during that time frame. The embarrassing 5-0 loss to Chicago on May 8 was the last time the team failed to acquire a point. In the last three games it has outscored its opponents 10-1. The truth is that the last five wins have come against Houston, Colorado, Vancouver, Cincinnati, and Orlando – hardly a top flight list. But there is no denying that confidence is at a season high.

It is impressive to watch Arena work and try to correct flawed teams. His second stint with the national team was poor but he thrives in the club environment. But the team’s movement in the attacking half is so much better right now and players are thriving with newfound confidence.

The next three weeks will be more revealing as it will take on three playoff-caliber teams: hosting LAFC, visiting Seattle, away at the Red Bulls. That will be tough to pick up points from these games but it’s not a good idea to bet against a streaking Arena team.


Last week, Atlanta earned six points from two games where it outscored its opponents 7-0. Then on Friday, it lost to LAFC in California by a 4-3 score. All things considered, that’s not a bad week of work to win the games they had to win in convincing fashion and then come just short against the league’s best team on the road.

But Friday’s loss revealed a lot of concerns and it all came down to removing Pity Martinez in the 59th minute.


Down a goal on the road against the best team in the league. You have the reigning South American Footballer of the Year, the league’s most expensive ever player, a 2x Libertadores winner who is playing well in a furious comeback. What do you do? If you’re FdB, you take him off

Atlanta was down a goal but mounting a comeback attempt being down 4-1. Pity Martinez was playing well and the team was now at 4-3. So manager Frank de Boer removes the most expensive player in the history of the league and the reigning South American Player of the Year.

These are the type of situations why you spend money on players. You want these players on the field in these moments. The Athletic’s Pau Tenorio put it best when he said it was a “battle of egos.”

After the game, de Boer had this to say:

“Pity didn’t play that bad,” de Boer said. “He did in the second half what everyone did. He was aggressive. I wanted to make minutes for Barco. The only position was that position. We need him also for the season. He gets only fit. These kinds of games make him fitter.”

By this logic, he’s treating a winnable game against the league’s best team as a scrimmage all while alienating a difference making player who the team spent a fortune to acquire.

These are the types of moves that really make you question what it is going to be like come playoffs.


One week ago all the talk was about Zlatan Ibrahimovi? and his trash-talking and delivering against LAFC. The Swede was spectacular as he essentially created the stage for his greatest Galaxy-era performance. He thrives on those types of environments. But the problem is keeping it up and the Galaxy had a huge letdown on Saturday in a 4-0 loss to Portland.

The Galaxy can go as far as Zlatan takes them. And that is good enough to win a big game. But can it win for a consistent stretch against good teams? Can it beat good teams on the road? No idea.

Meanwhile, Portland look like they have a lot going for it at the moment. Brian Fernandez is a handful, Diego Valeri is class, and Jeremy Ebobisse continues to have a nice season as a U-23 American.


It is getting repetitive to add onto what San Jose is doing this year but a 3-1 win over Colorado was its fourth victory in a row.

But San Jose is playing the game right now at a frantic pace to create chances. The team is also quick to pull the trigger with shots – outshooting its opponents 81-22 in the last three games.

After the season it had last year, Matias Almeyda’s team now has the most points in the league since April 1.